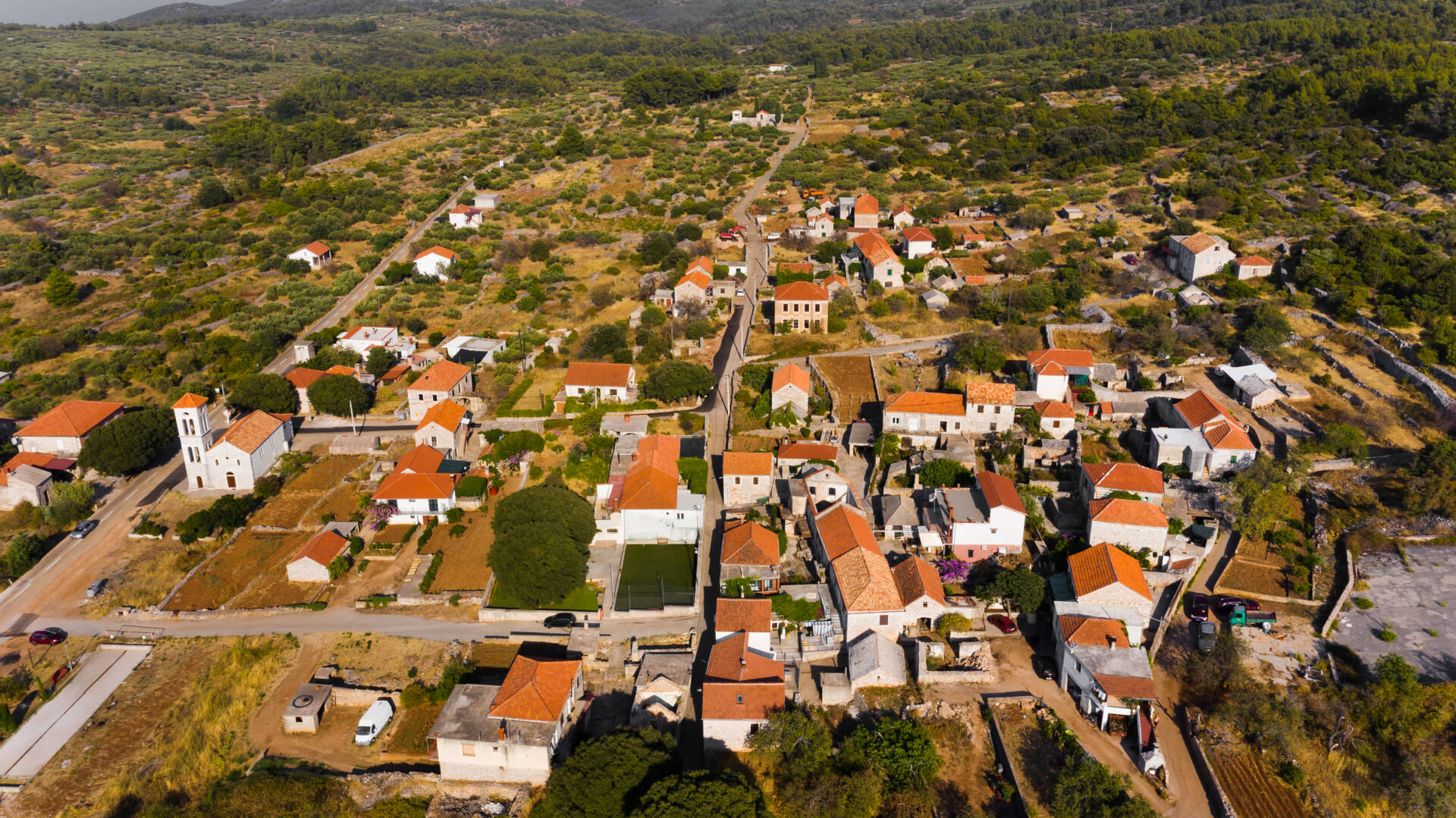 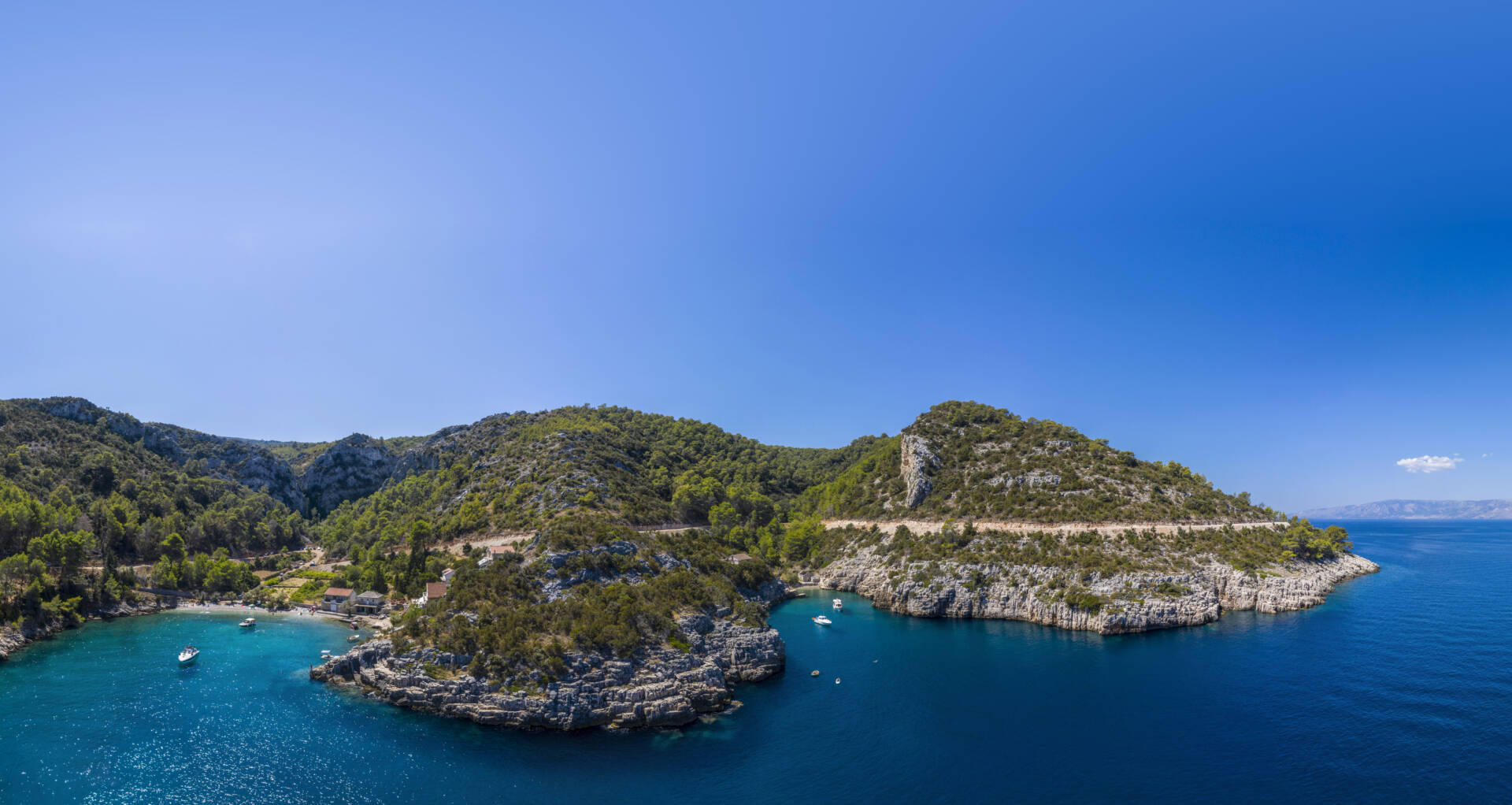 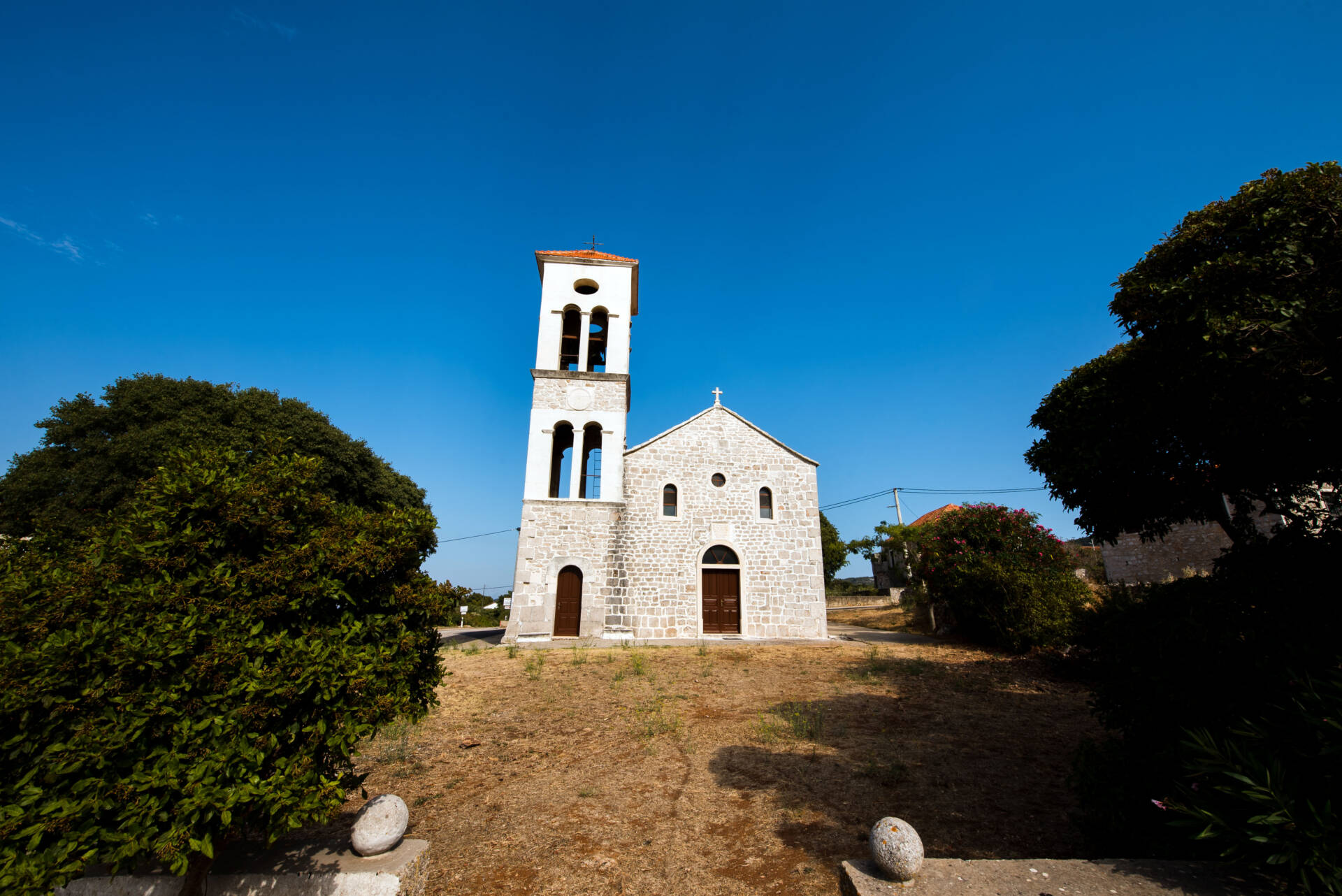 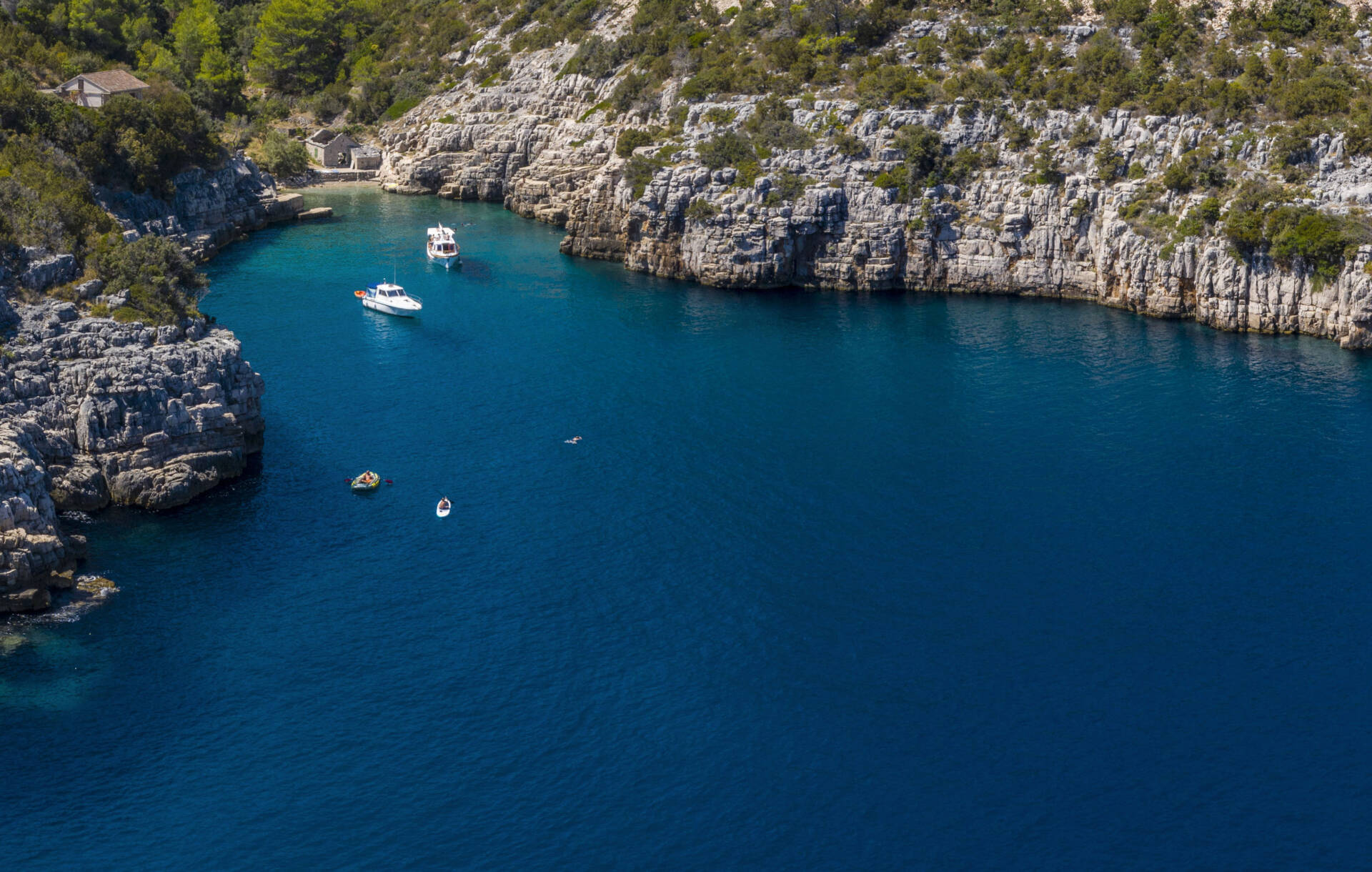 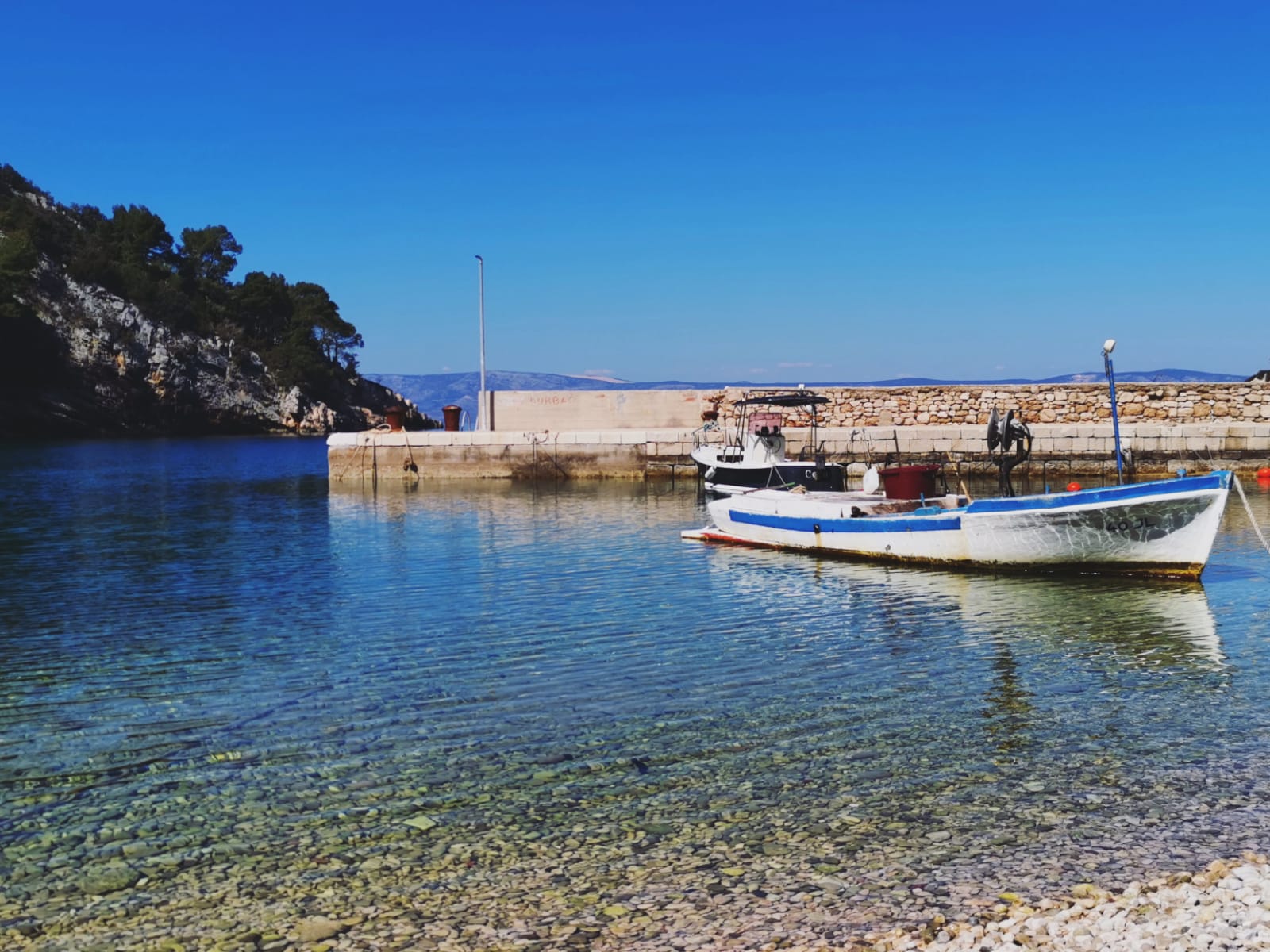 About Poljica
Poljica is an inland village 14 km east of Jelsa, 22 km from Stari Grad, 39 km from Hvar Town, 5 km west of Zastražišće, and 37 km west of Sućuraj. It is situated 2 km from the sea, at 157 m above sea level. Poljica marks the first settlement in the eastern region of Hvar Island known as ‘Plame’, which is now generally accepted as extending from Jelsa to Bogomolje, although in historical records it went past Sućuraj to the eastern tip of Hvar.

History
It is not known exactly when the village of Poljica came into being as a permanent settlement. The first known written record of the village of Poljica dates to 1407. The area was certainly inhabited and in use from prehistoric times, as shown by the stone burial mounds and various artefacts such as pottery and tiles which have been discovered there. These date right back through the Palaeolithic, Mesolithic, Neolithic and Eneolithic periods, as well as the Bronze and Iron Ages.

In the hills to the south up above Poljica, there is a small prehistoric hillfort on a spur overlooking the Mala Stiniva Bay, which commands a good view over the bay and the sea beyond towards Makarska on the mainland. There are also ancient burial mounds on the high ground among the fields.

Roman relics were found on the edge of fields by the tiny settlement of Grahovišće, which is just 600m north of Poljica. Apart from fragments of pottery, tiles and building materials, there were two stone cisterns and a wall. One of the cisterns was incorporated into a barn dating from after the Middle Ages, and the other into a modern building. On the same site there were also several old graves, which could not be dated with accuracy.

About the people
The residents of Poljica were numbered together with Zastražišće until 1673, when a census showed that 83 people were living in Poljica, in 12 households. In 1711 there were only 35 residents. The numbers fluctuated over the years. Numbers reached a peak at 314 in 1900, but stood at just 59 permanent residents in 2011.

There was a school in Poljica, which opened on November 3rd 1905. It operated until 1972, with a short break between 1911 and 1913. At first it was located in rented private houses until September 1st 1936, when the purpose-built school building was opened. In 2021, the Jelsa Tourist Board and the Croatian Astronomical Union (website in Croatian) have initiated a project to renovate the derelict building, creating a visitors’ centre and night-sky observatory.

Agriculture is still the main occupation of the villagers, who cultivate mainly olives and grapes, although tourism has become an important source of income for many families. The village may seem largely deserted at first sight. Mains electricity was only introduced in 1962. There is no running water as yet, although the project to connect the village to the mains supply is underway as at 2021, due for completion by 2023. It is true that many people have left, most often for economic reasons, some to other parts of Hvar Island, others to try their luck abroad. However, as in many of Hvar’s little settlements, a lot of the villagers retain a fierce loyalty to Poljica, no matter where they are. There are Facebook pages (in Croatian) dedicated to Poljica, such as Poljica na Hvaru / Pojica na Foru fb: https://web.facebook.com/groups/1456367947971095?_rdc=1&_rdr. Two elements in the village’s identity command deep emotions: the church with its religious festivals, and the football team.

The Football Club – Hrvatski nogometni klub ‘Vatra’ (Facebook page in Croatian)
NK ‘Vatra’, meaning ‘Fire’, was founded on April 30th 1937, and reached the final of the Hvar Football League Championship in 1960. Having reached the final again in 2003 and 2010, NK ‘Vatra’ at last won the Hvar Championship in 2021. To cover the club’s expenses, members take every opportunity for fundraising, such as clearing local footpaths and cooking Dalmatian specialities for their stand at Jelsa’s annual Wine Festival.

Poljica and the Church
The role of the Church in Poljica’s history goes back a long way, and reflects the population’s fierce independence of spirit, as well as the vital contributions made by the village families to their parish. Originally dependent on the Zastražišće parish, which was founded in 1605, Poljica finally broke free to establish its own parish in 1924, after a long and sometimes violent struggle!

The Story of the Parish Church
The first written record of the Poljica parish Church of St. John the Baptist dates from 1579, during the Papal Visitation of Agostino Valier. The original church was small, and suffered damage from damp and neglect over the years. It was completely renovated and enlarged to twice its original size in 1940, and since then has been maintained and restored at frequent intervals.

The bell tower on the north side of the facade was erected by the villagers in 1926, with two bells cast by the Split firm Cukrov. The larger bell was dedicated to St. John the Baptist, the smaller one to Our Lady of the Rosary. The Poljica bell tower was completed with its four-sided roof in 1966, and until the Zastražišće bell tower was erected in 1980, it was the only example of its kind in the Plame region.

The main altar of marble and stone with a carving of the Lamb of God was probably installed in about 1910, replacing the old wooden altar. It may have been the work of Andrija Bertapelle (1834 – 1917), an altarist from Vrboska who had come to live in Poljica. The wooden statue of St. John the Baptist in the niche above the altar dates to 1939. In the north side of the church is a recess containing a wooden polychrome statue of Our Lady of the Rosary, made by woodcarver Giuseppe Runggaldier, a craftsman from the church of Sant’Udalrico in the Val Gardena, an area in South Tyrol renowned for the exquisite quality of its woodcarving. The statue was dedicated in 1911.

On the south side of the aisle, there is a 1938 statue of the Sacred Heart of Jesus in a niche ordered in Milna in 1956. In that same year the choir was erected. The statue of St. John the Baptist beside the baptismal font probably dates to the 19th century. At the back of the church is a crucifix called the ‘Mašurić Cross’ standing in a frame created from restored preserved parts of the old wooden altar, which was probably carved by the Jelsan woodcarver Vinko Palaversić at the beginning of the 20th century. The small sacristy on the south side of the church contains a 16th century chalice in its otherwise modest inventory. There is also a fine Tyrolean statue of the Resurrection which used to be carried in the traditional processions.

Poljica’s Chapels and Shrines
Several religious shrines around the village bear witness to the villagers’ faith. The stone cross near the school building was erected in or before 1900, as a symbol of the villagers’ declaration of spiritual independence from Zastražišće. Other sacral features include St. Dominic’s chapel (c. 1939), St. Rocco’s shrine, St. Anthony’s chapel, and the Shrine of Our Lady of Fatima (1963) in the courtyard of a private house.

How to get to Poljica
The village lies on the main 116 road which connects Hvar Town and Sućuraj.

What there is to see and do
* The village is composed of buildings reflecting the lives of the inhabitants through centuries of history. Looking at the village’s old stone walls and roofs, it’s easy to imagine what life was like there in former times.

* There are beautiful secluded beaches some 2 km away: the two which officially belong to Poljica are Mala Stiniva and Zečja to the north of the village, but there are many more tiny coves in the vicinity, including Prapatna and Makarac. See our article ‘Jelsa’s Beaches‘ for more details.

* Walking around the surrounding region offers beautiful views of the rural and natural landscape, interspersed with the prehistoric remnants to stimulate the imagination about how life was in distant times past.

Where to eat and drink
There are no shops, cafés or restaurants in Poljica, so take supplies with you, especially drinking water, if you plan to go walking in the area.

Special events
St. John’s Feast
The feast day of St. John the Baptist, patron saint of Poljica, is celebrated on June 24th. Two days before, NK ‘Vatra’ organizes a five-a-side football tournament for teams from all over Hvar Island. The final is played the day before the actual feast, which is called ‘žežin‘ in local dialect. As is the custom in the evening of žežin, Poljica’s residents and villagers who have returned for the occasion gather in front of the parish church for a big traditional bonfire (oganj). Celebrations on the actual feast day start with a concelebrated Mass, after which eating, drinking, music and dancing are the order of the day, as well as a ‘balota’ (bowls or pétanque) tournament.

The Good Friday Procession
The Procession, with the year’s chosen Cross-Bearer as its central figure, sets off from Poljica at 6am on the morning of Good Friday, at the same time as the Zastražišće Procession leaves its parish church. The two Processions walk clockwise along the main road and narrow tracks, so they do not meet. The Poljica Procession heads down to the sea at the Vela Stiniva Bay, where the Cross is dipped into the water as a symbol of connexion with all the villagers in all parts of the world who are absent from their home roots. The Procession continues on to the Zastražišće parish church before returning to Poljica. In 2021, no-one from Poljica had volunteered to carry the Cross, so the victorious football team took it in turns, in a unique blending of the village’s two main influences! 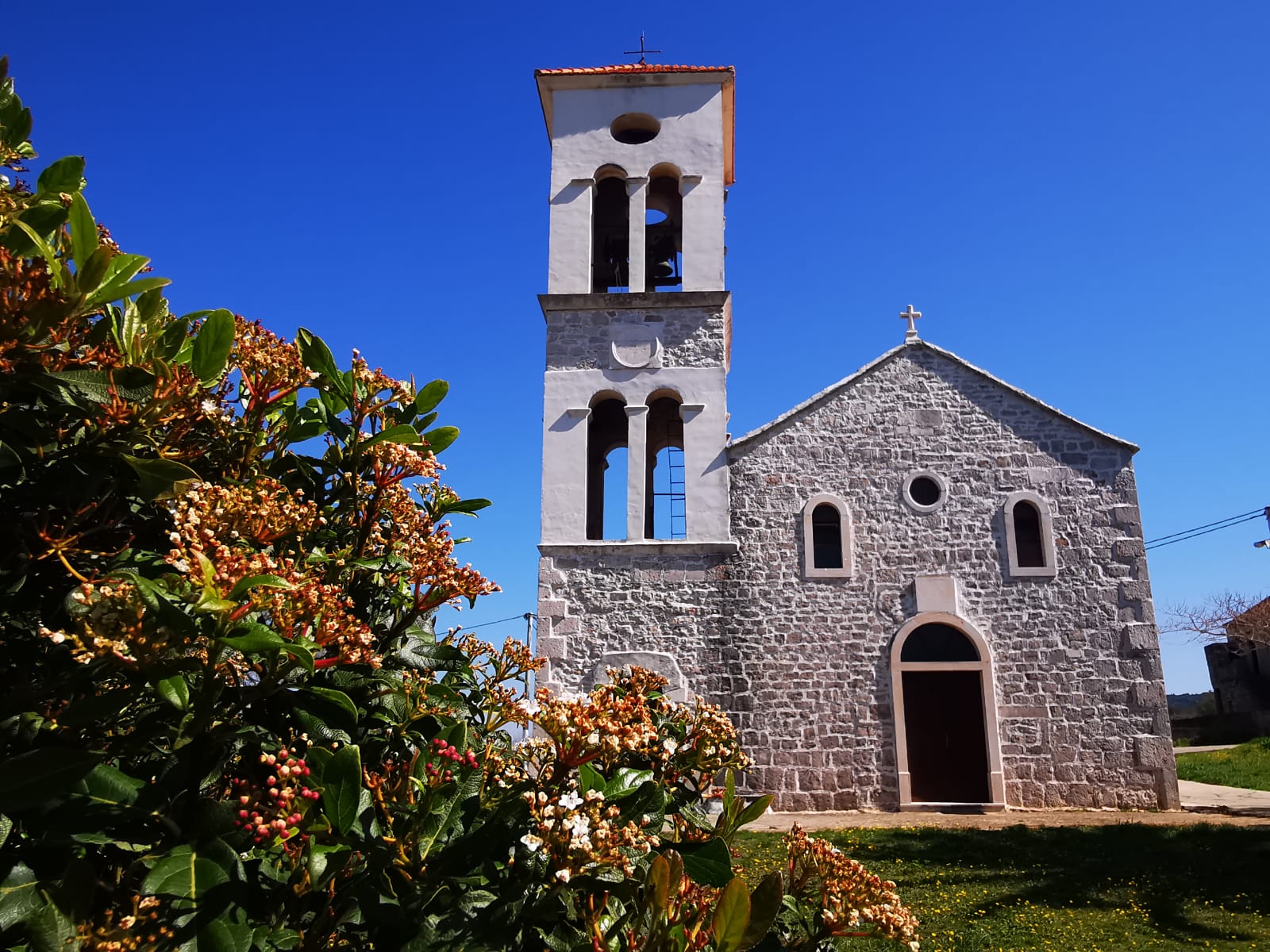 The Church of St. John the Baptist 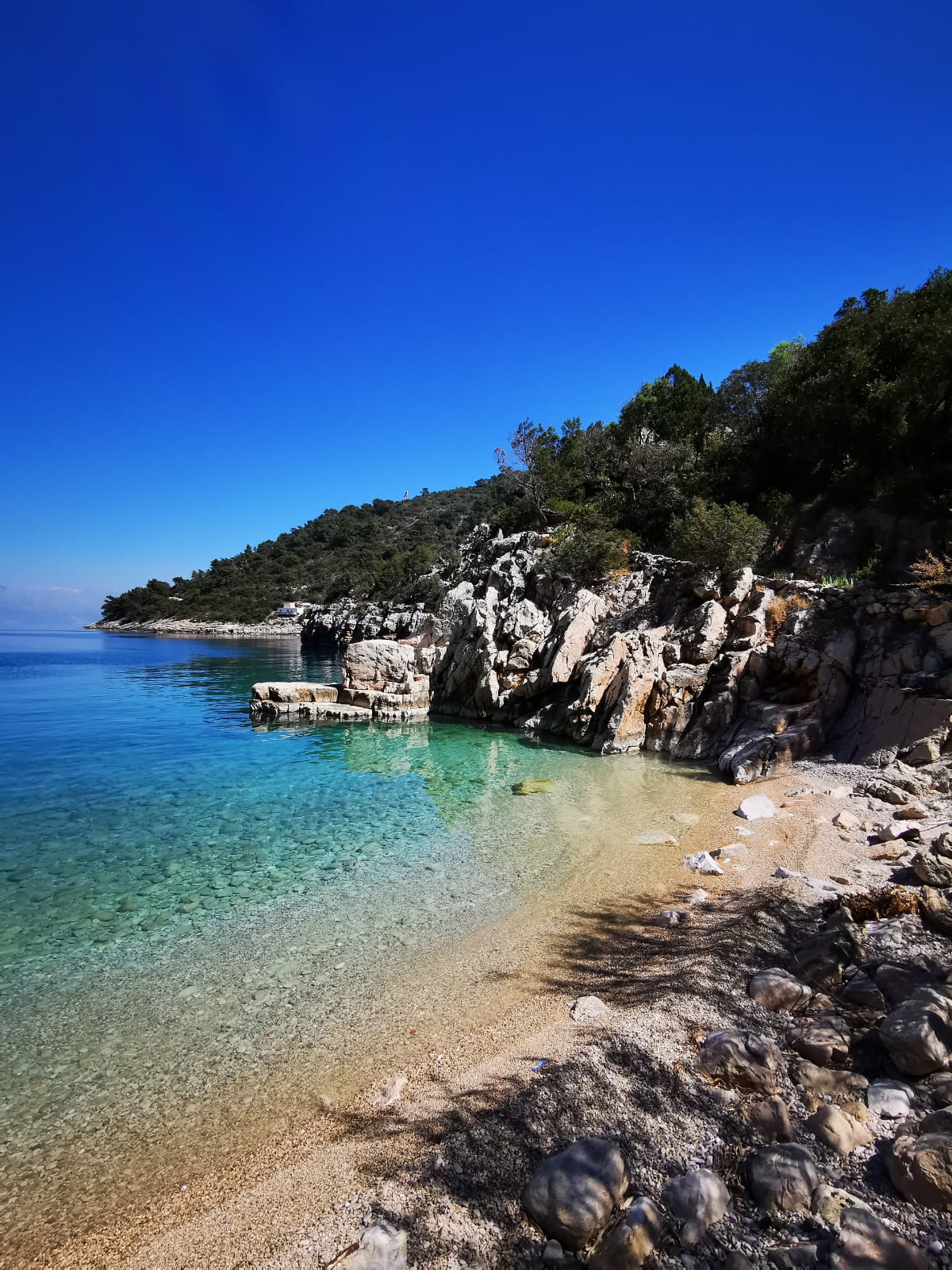 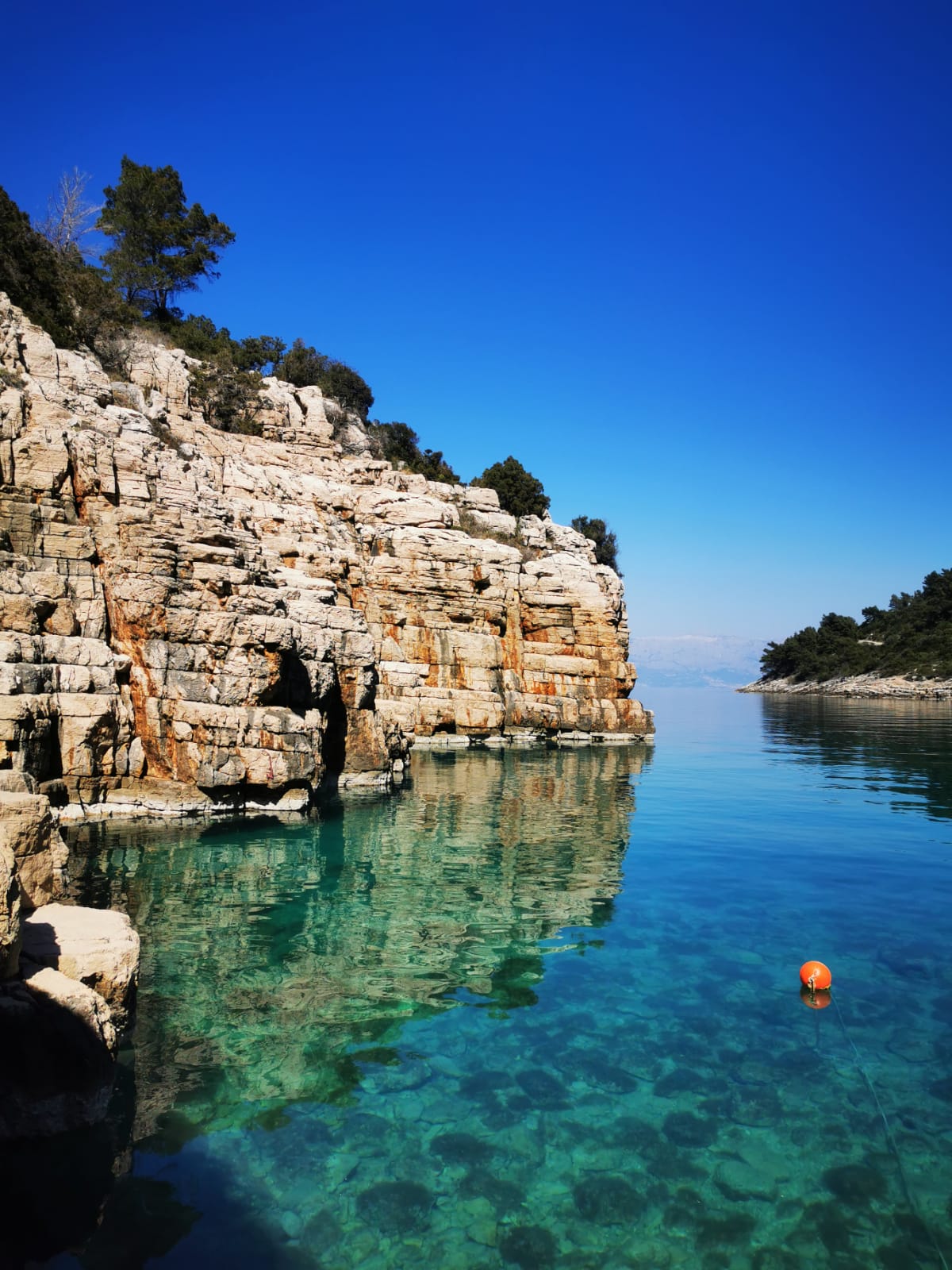 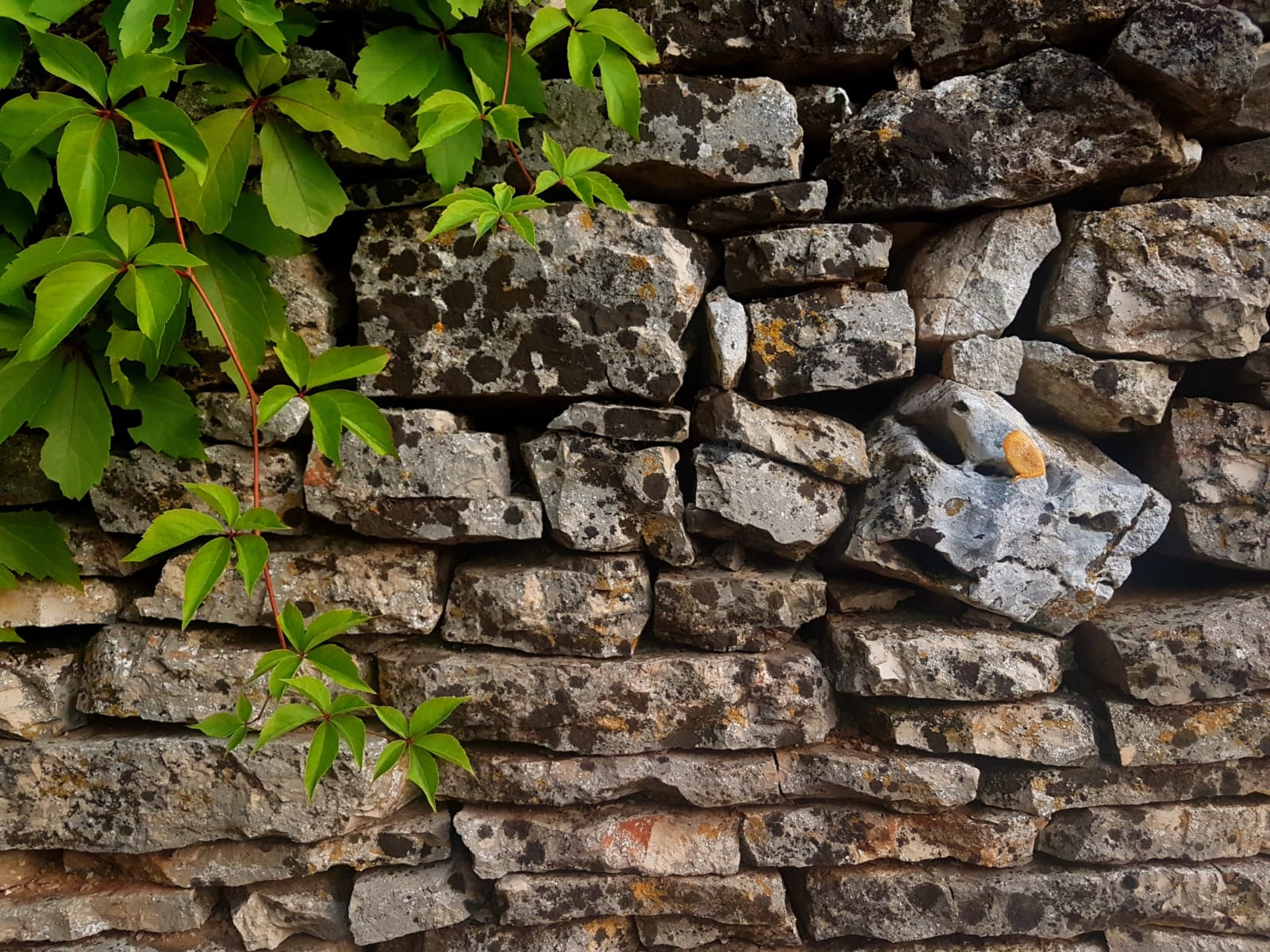 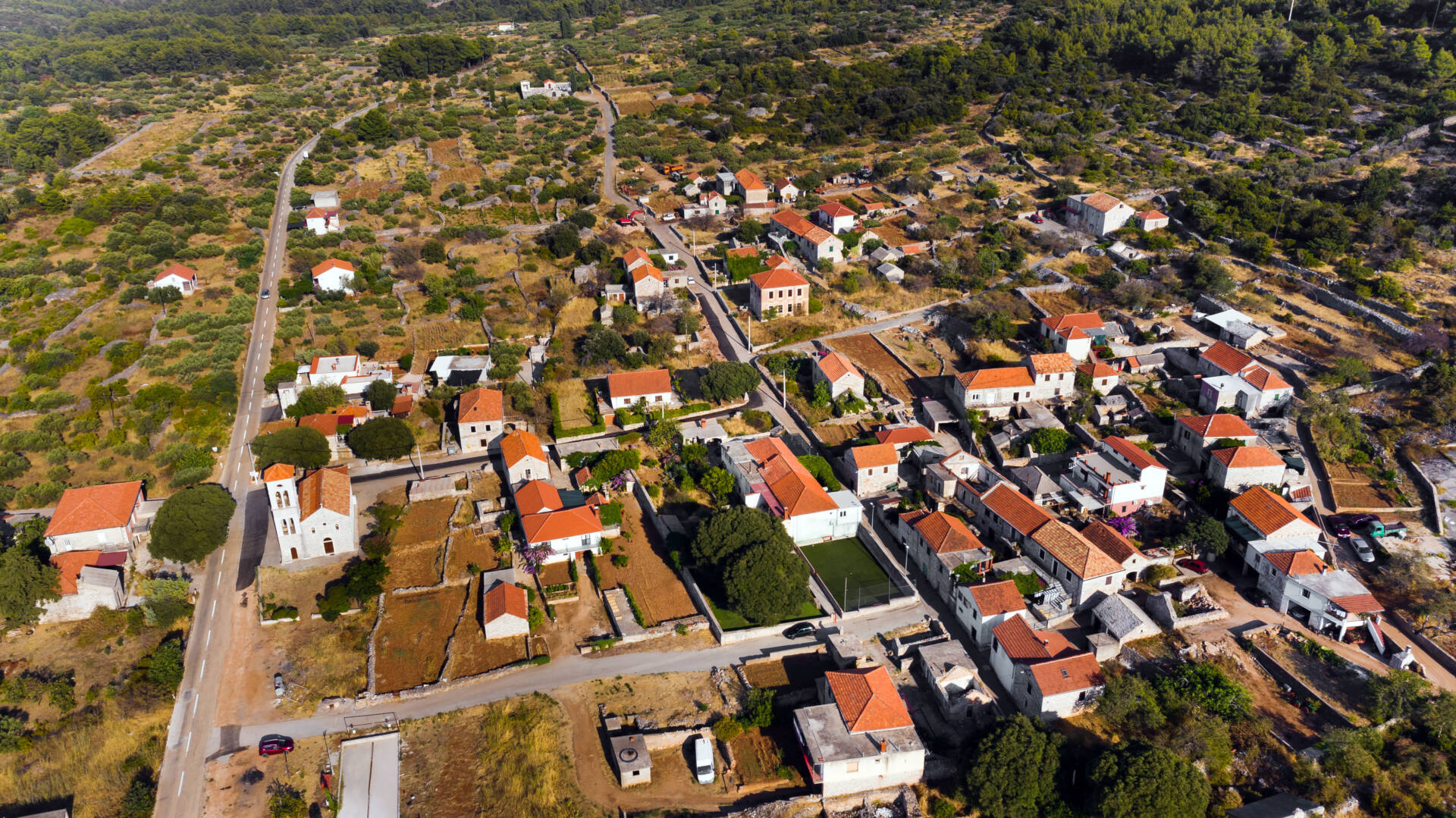 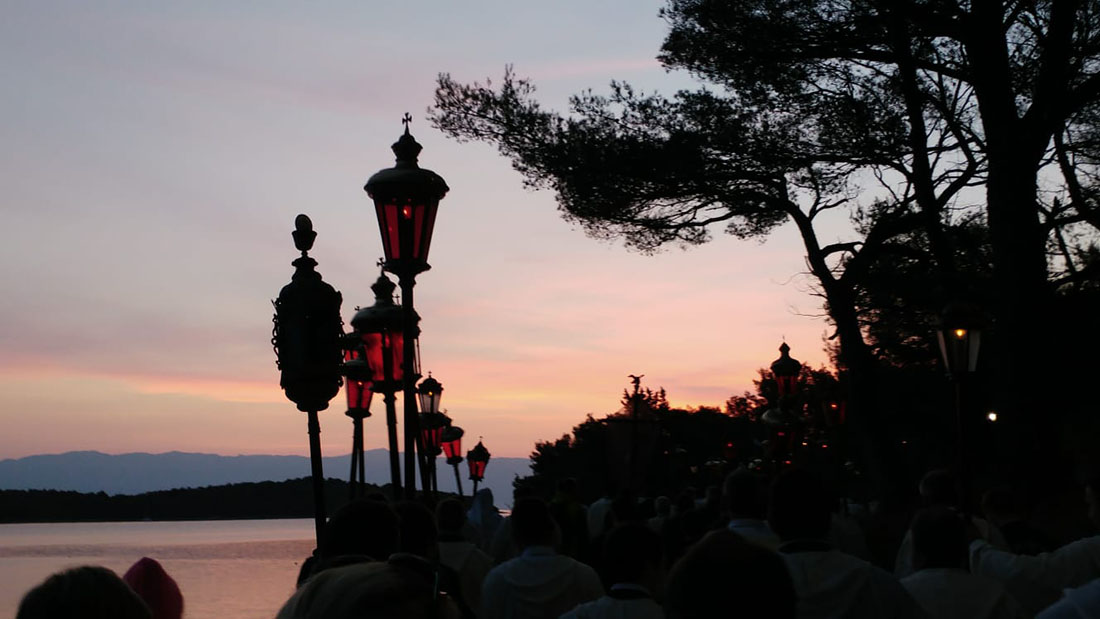 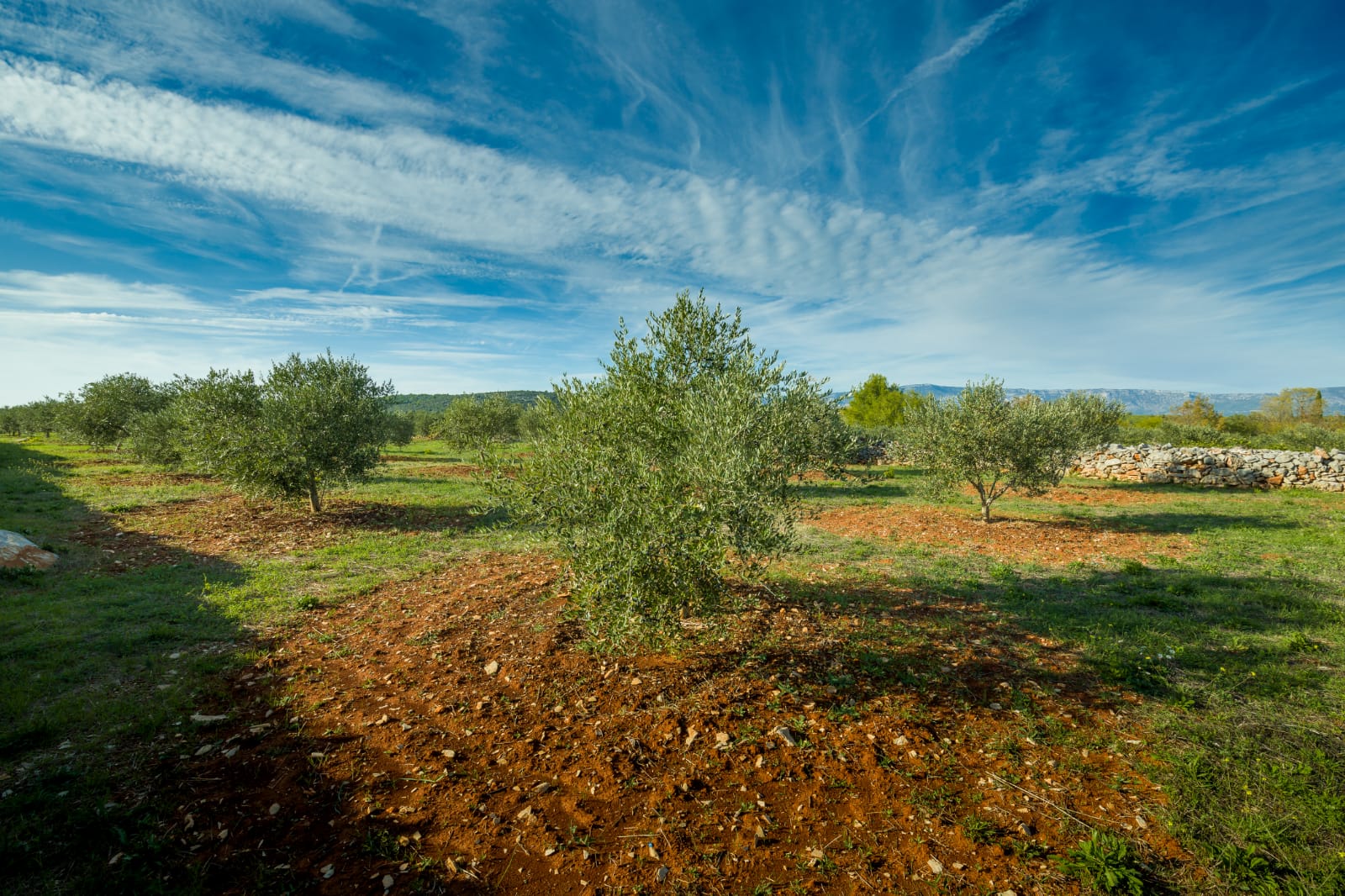 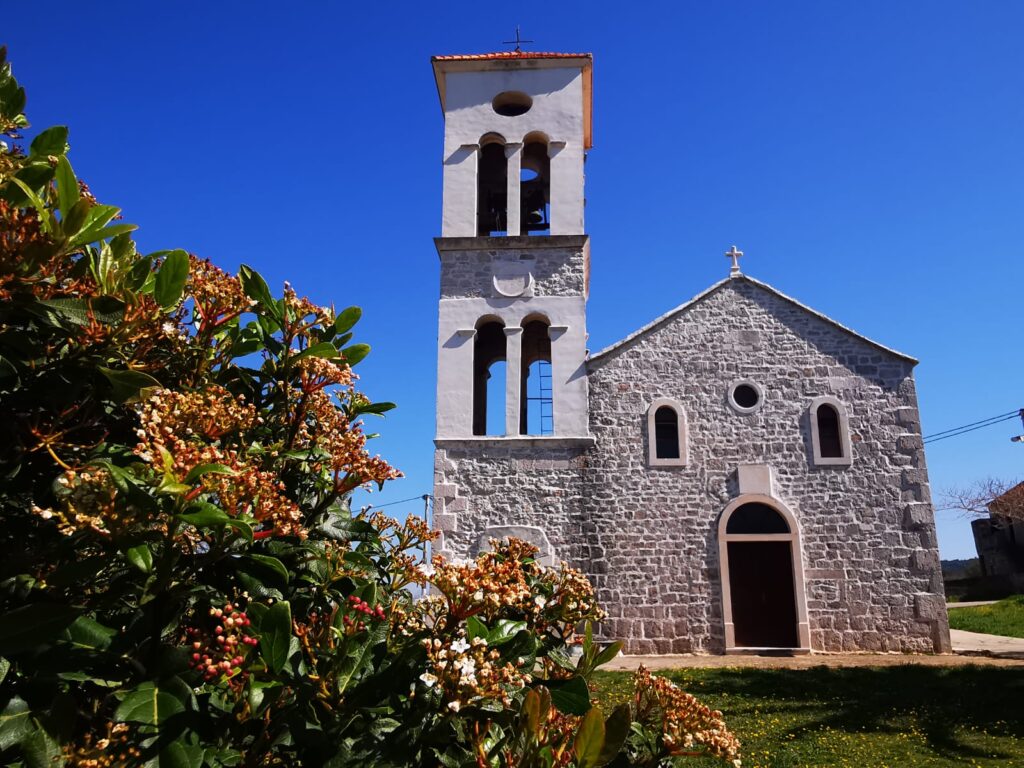 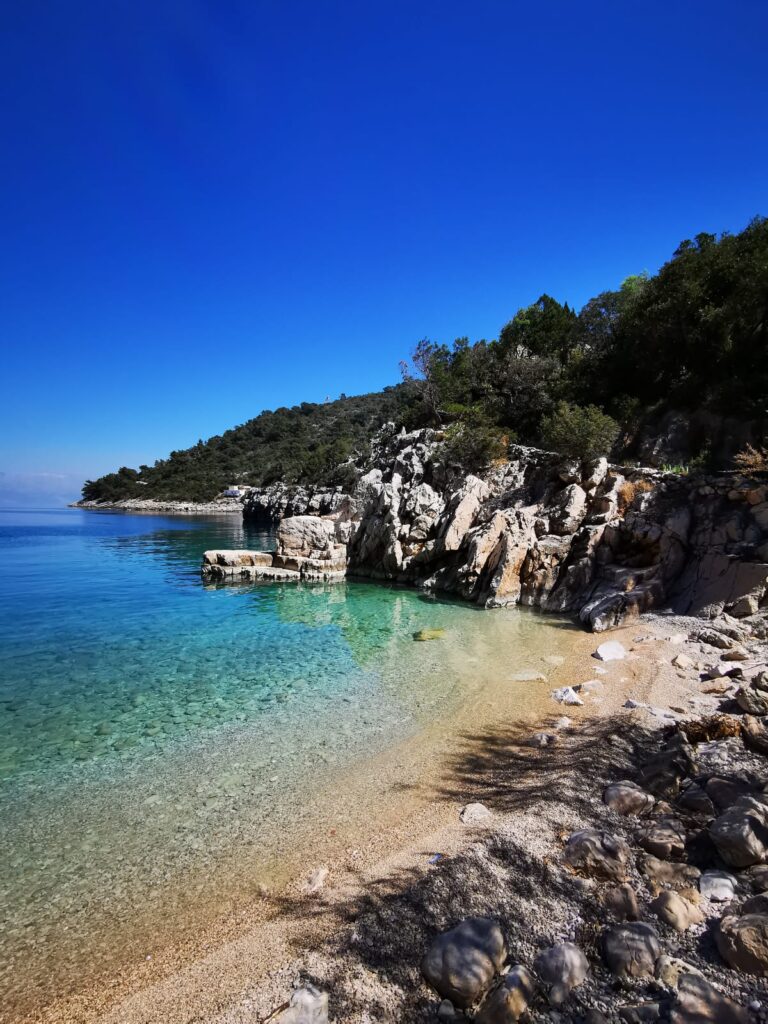 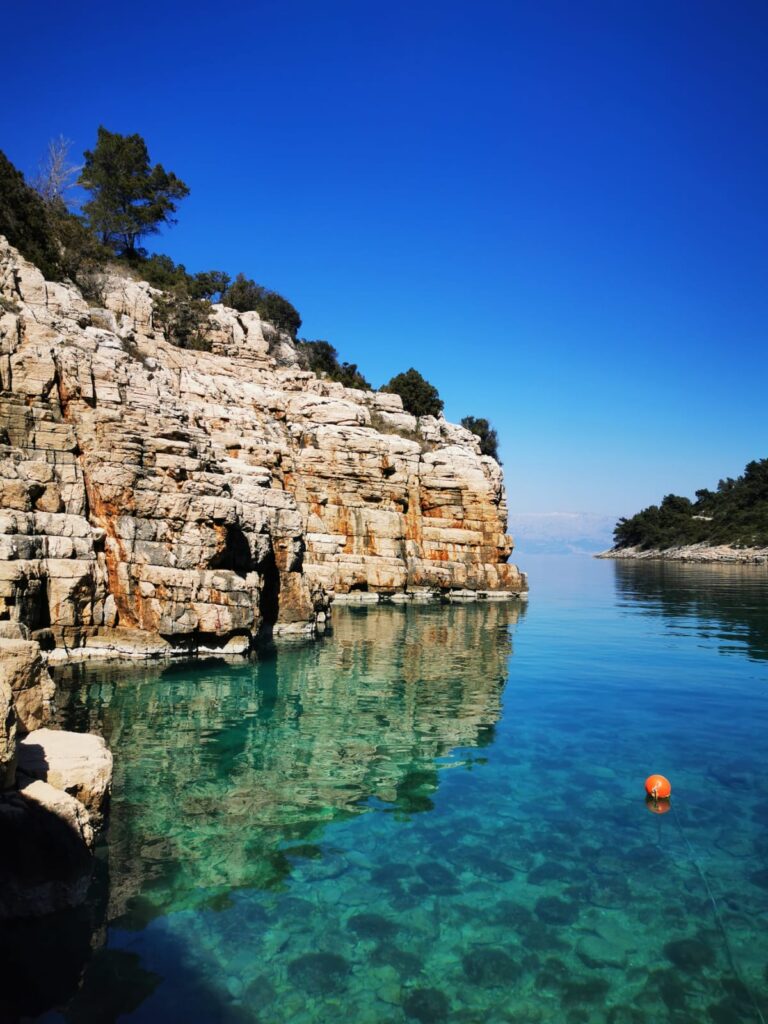 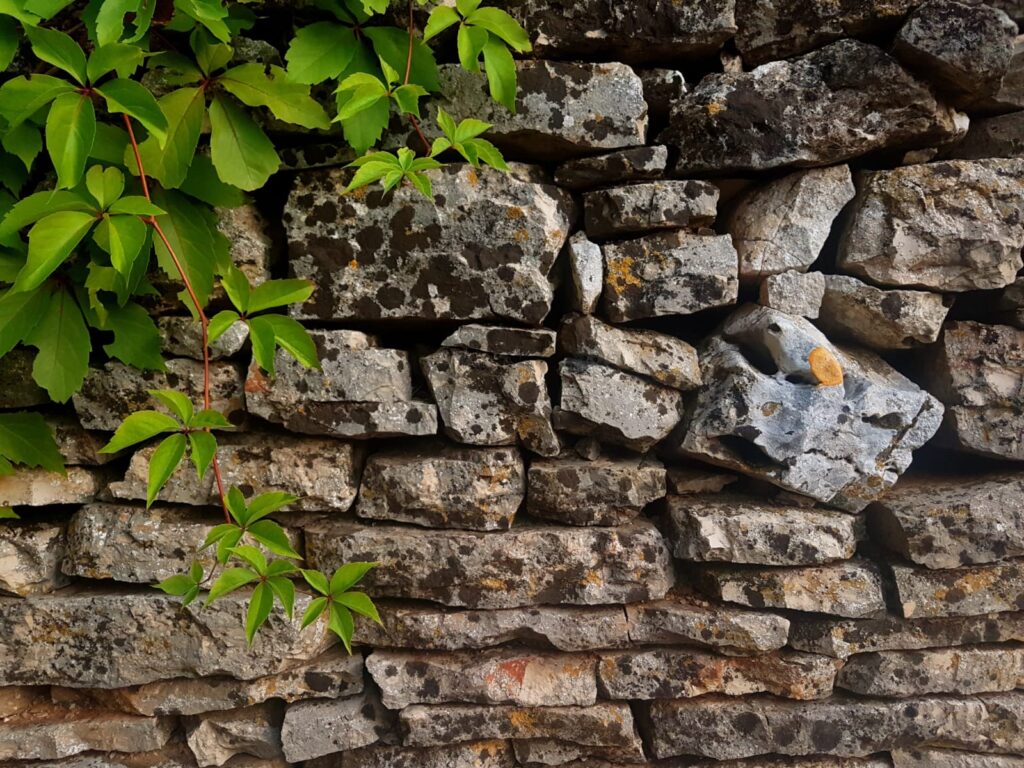 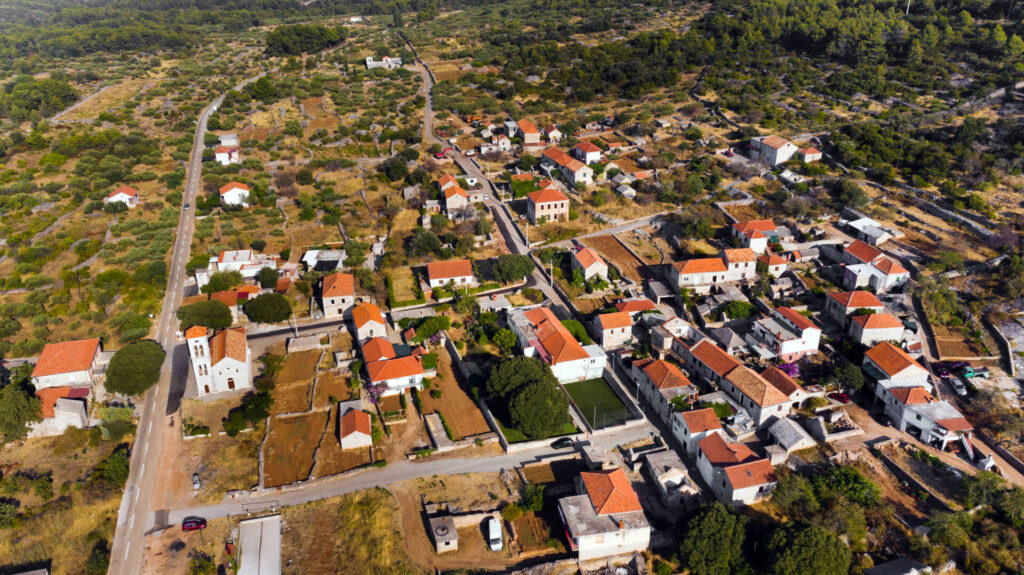 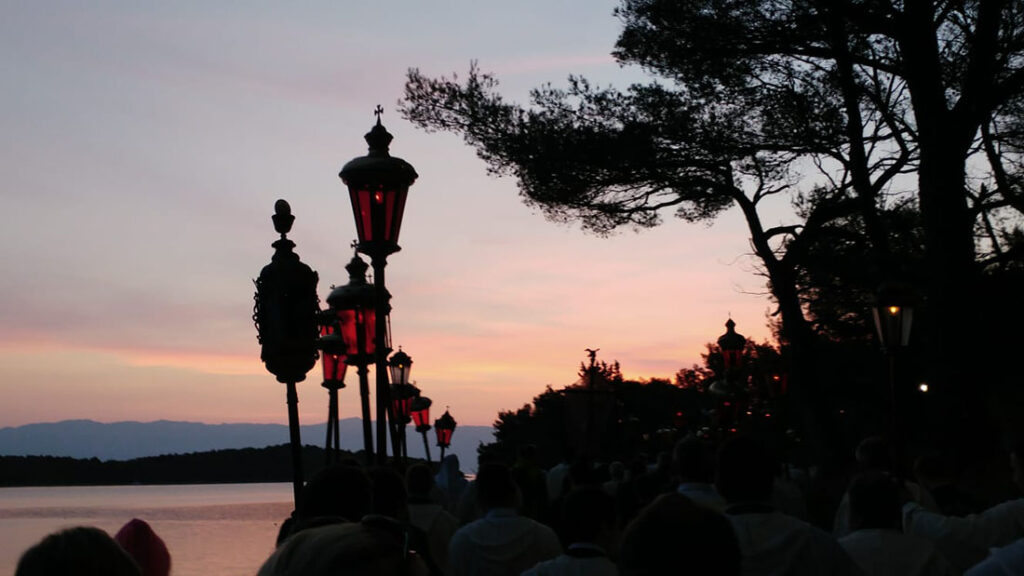 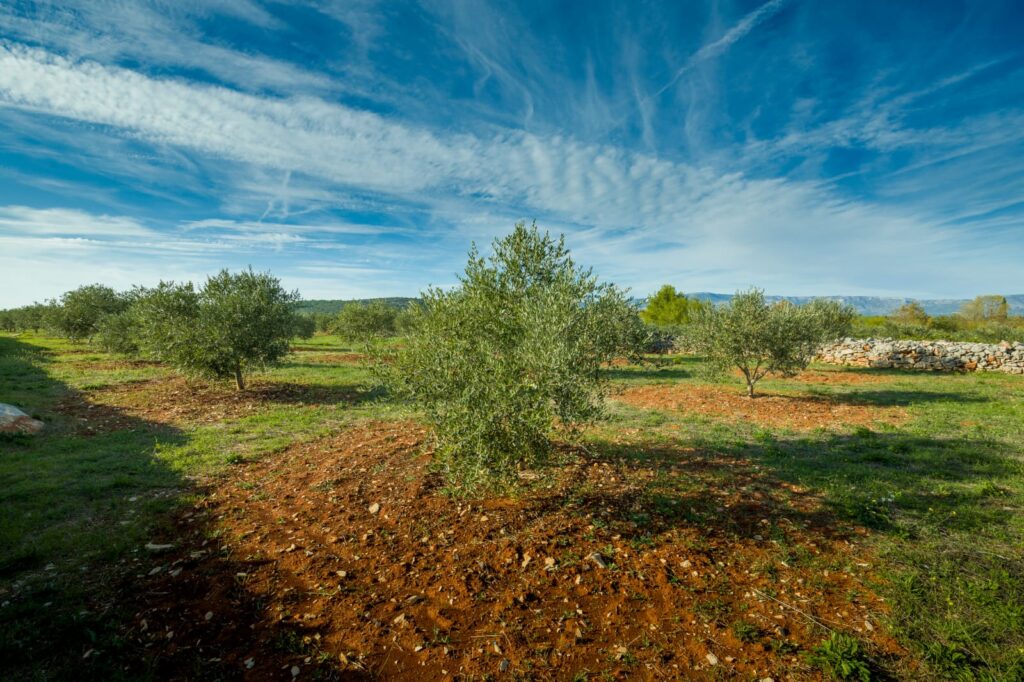