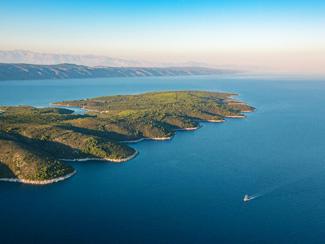 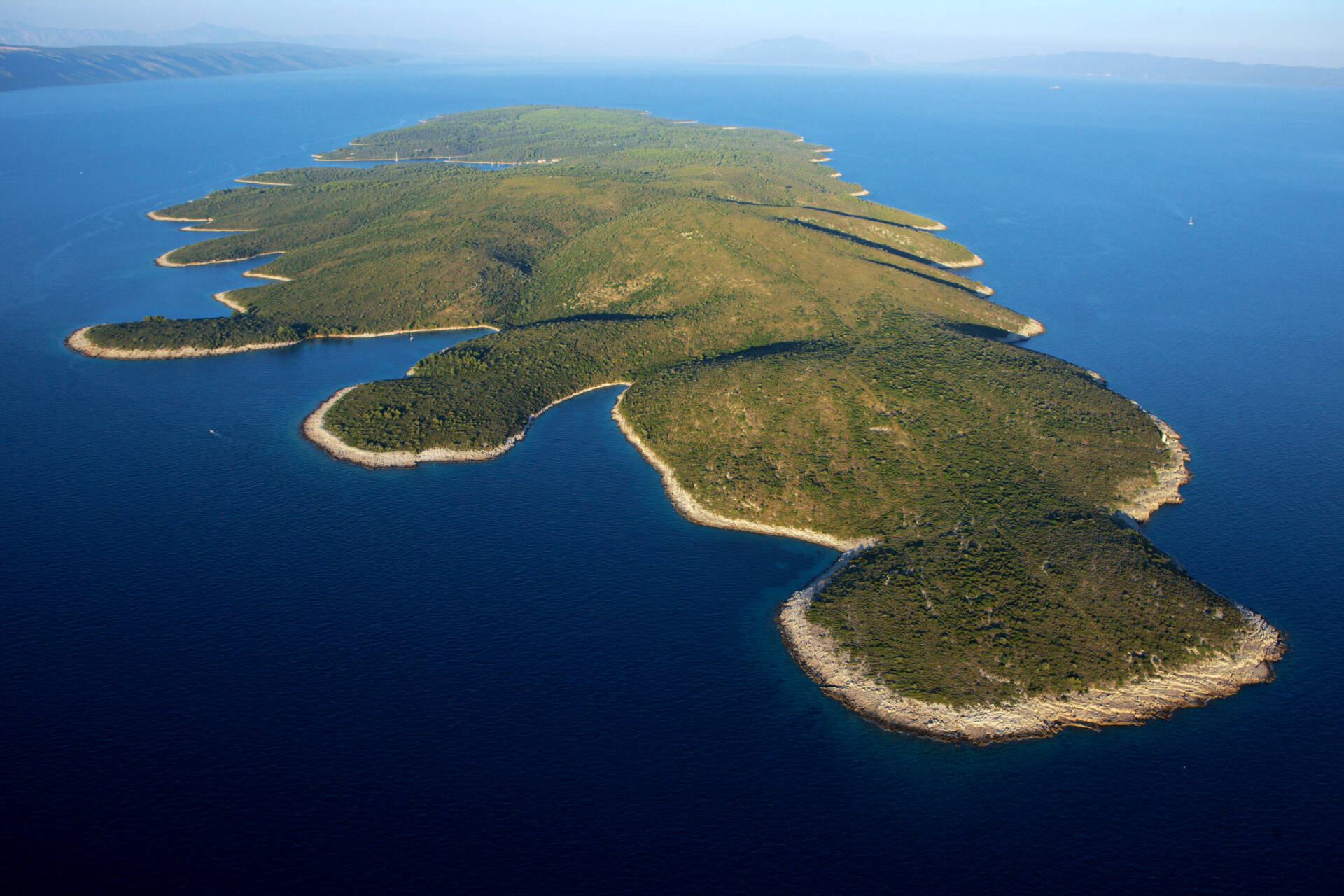 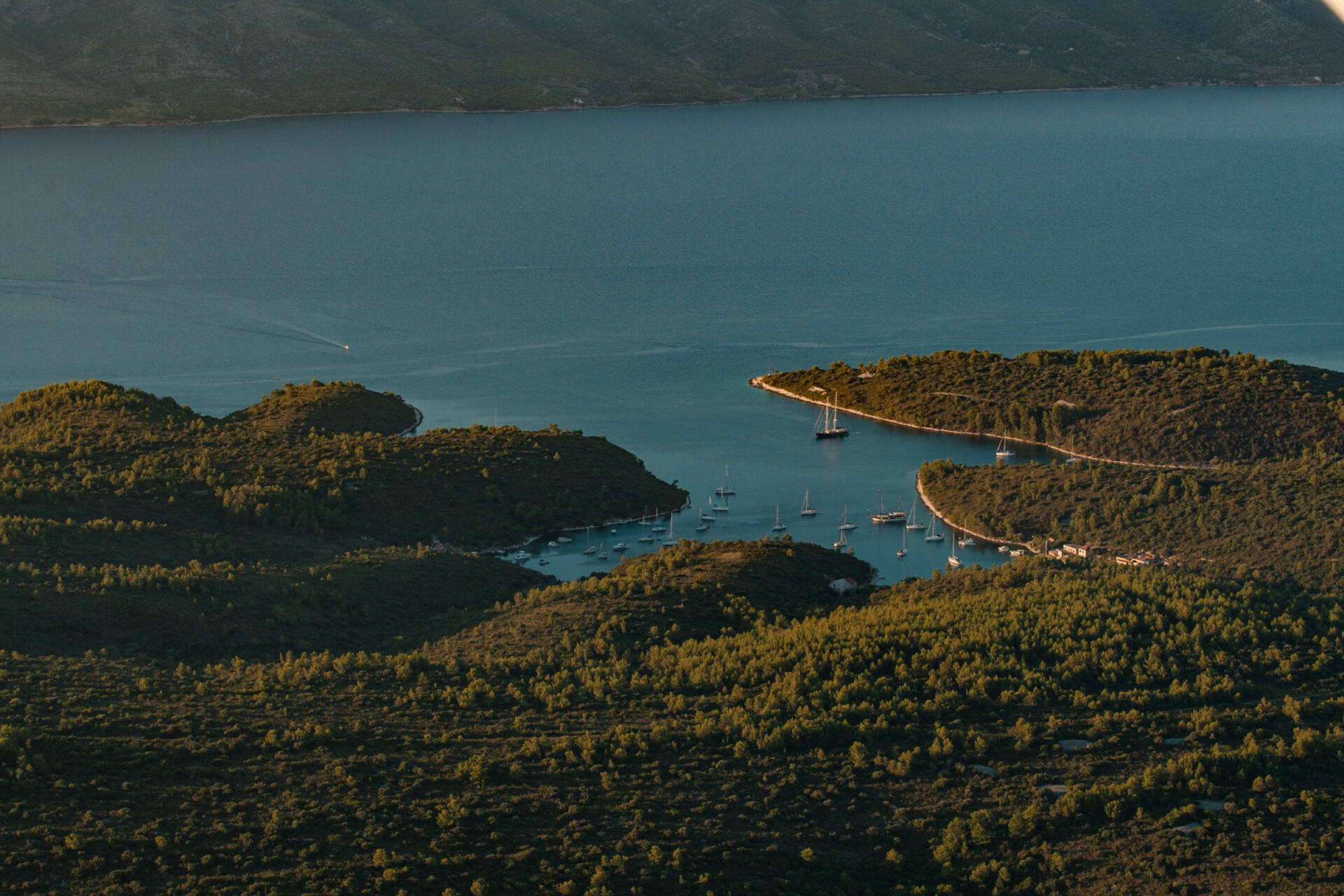 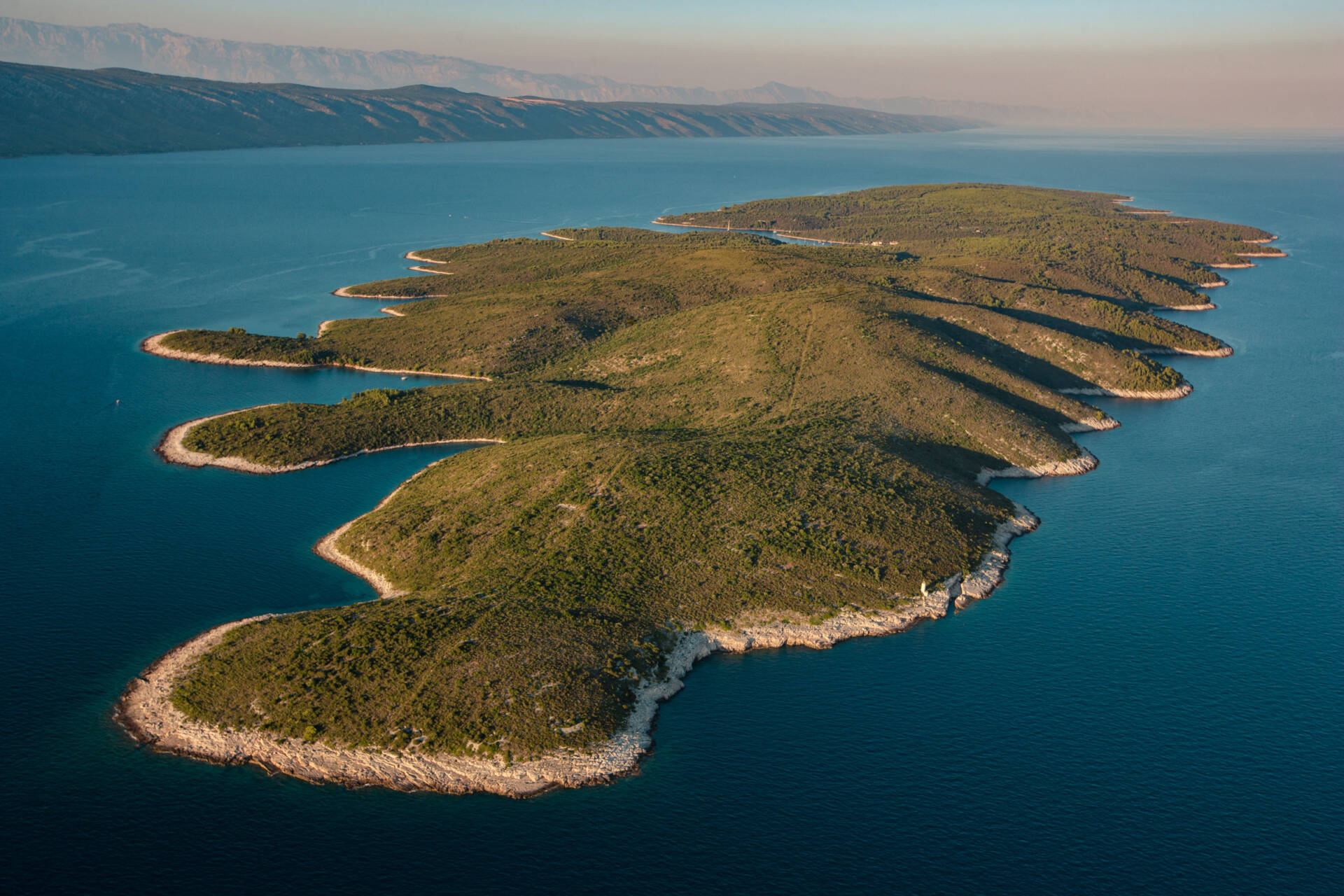 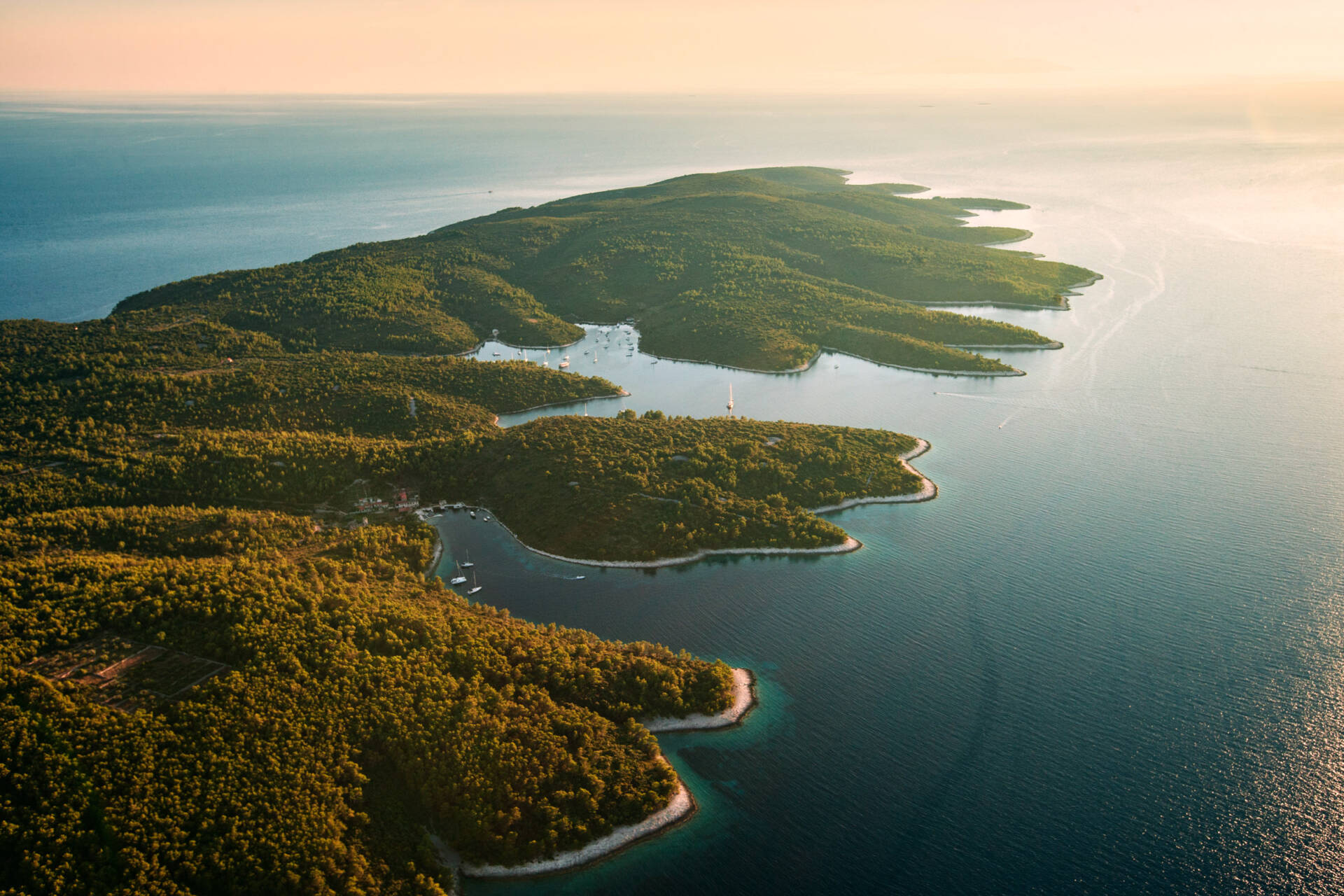 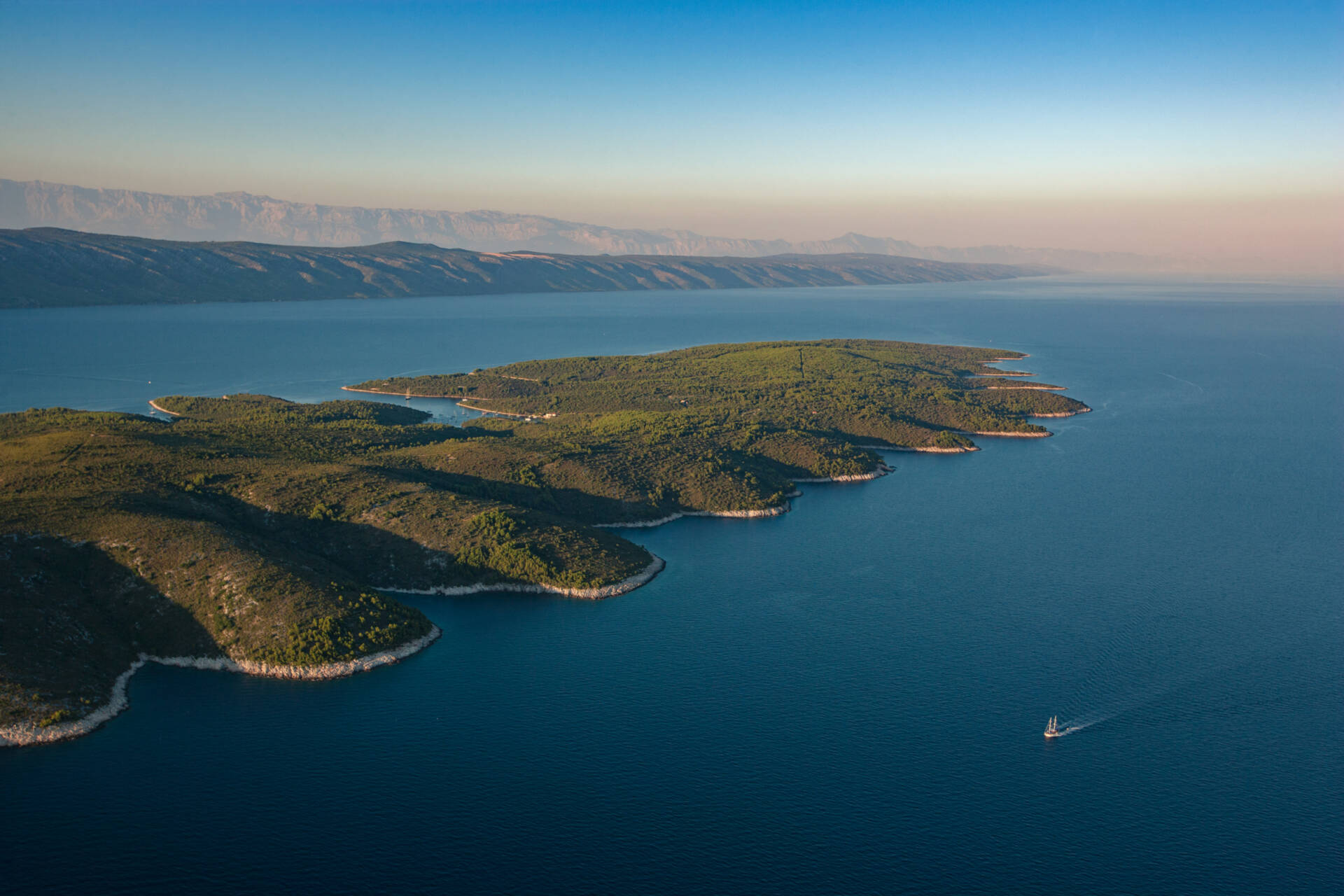 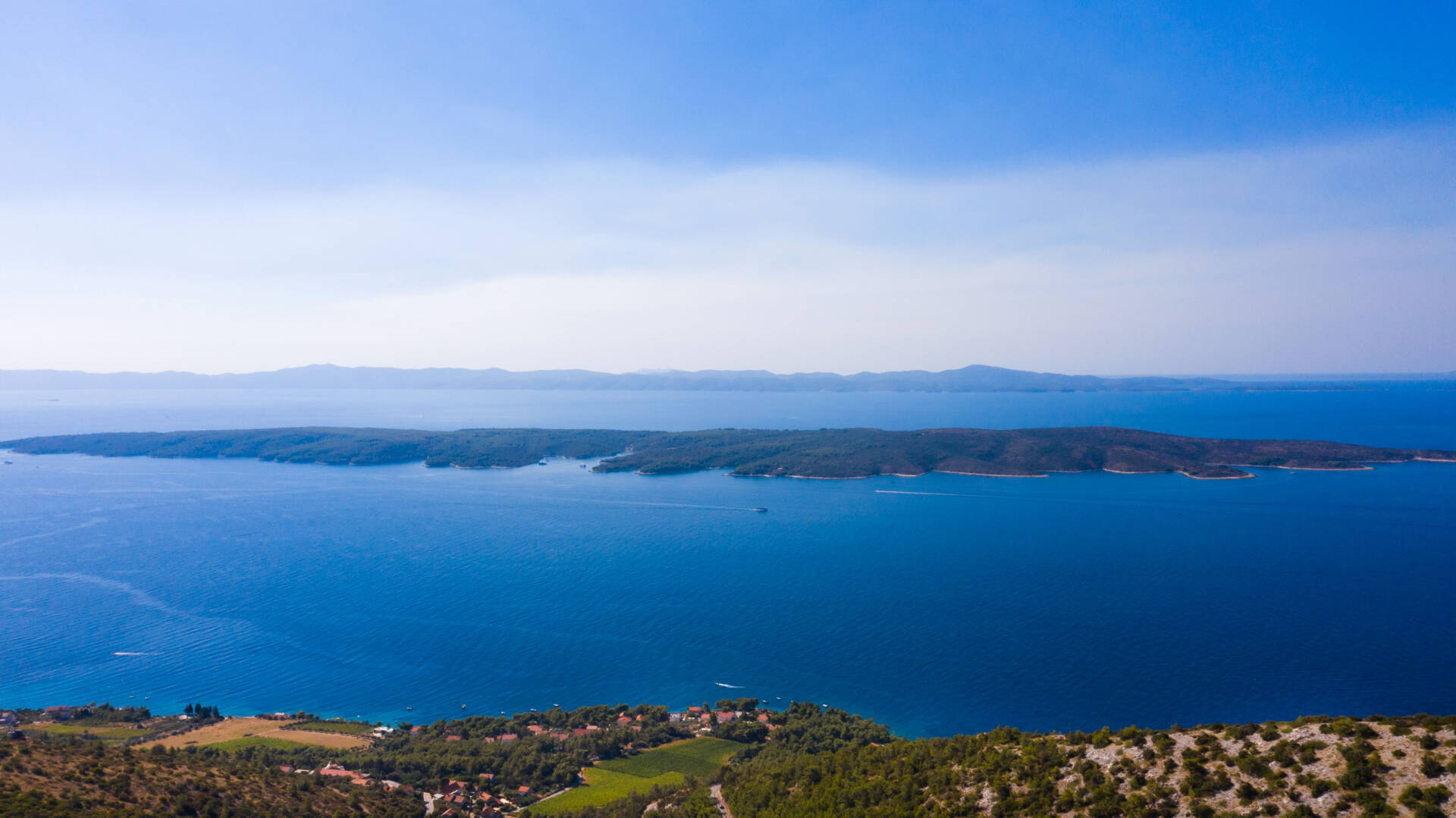 Yachtsmen love the little islet of Šćedro, which is only accessible by small boat or helicopter. In summer many boats moor in the secure bays on the north side of the island, so that the owners can enjoy the peace and silence, the clean sea, and the fresh fish on offer in the restaurants.

Šćedro is situated in the Korčula Channel close to the south coast of Hvar Island. It is 12 km from Jelsa, and about 2.7 km from the village of Zavala. It measures 6.5 km in length, width 2.5 km, with a total land mass of 8.36 km. It is 113 m above sea level at its highest point. About 3 km west of Šćedro are the three tiny Lukavci islets, which are sometimes above, sometimes under water.

Šćedro has been listed as a protected landscape in Croatia since 1968. The beauty of Šćedro lies in its indented coastline and abundant plant cover with the typical Mediterranean combinations of woodland and undergrowth. There are two villages on the islet, Mostir and Nastane, which were once inhabited, but are now only sparsely occupied, mainly in the summer. On land and in the surrounding sea are several historical archaeological sites.

The history of Šćedro

The name Šćedro is thought to derive from ‘štedri’, which in old Slavonic languages means ‘benign’, ‘merciful’, and ‘compassionate’. It is so named because today, as in former times, sailors find refuge from storms in the island’s bays and moorings. Lovišće offers shelter in all weather conditions. Porat, Mostir and Tufera are secure from the violent south wind (jugo), while Porteruša is sheltered from the north wind (bura). In the Mostir Bay there is a fresh water source called Studenac. Throughout the Middle Ages, up until steam boats became the norm, Šćedro was extremely important to the mariners of Venice, Dubrovnik and others.

The Latin name for Šćedro was Tauris, which gave rise to the Italian names Tauricola or Torcola. Tauris meant not only ‘bull’, but also ‘hill’, so the name might have referred to the island’s highest point, which is called ‘Vela glova’. In historical documents the islet is called Torkola. In about 47 BCE a decisive sea battle for the Roman Empire was fought just off Šćedro, and remnants of the sunken boats are visible in the Mrtinovnik Bay. Following this battle, no more wars were fought in the Adriatic for several centuries.

There are about 80 stone mounds (barrows) on Šćedro, dating back to ancient times. Some are individual, some arranged in groups. The largest grouping, measuring 40m across and 4m in height, consists of ten mounds, situated at a place called Kadunje Gomile on a plain to the south-east above Mostir Bay. The biggest single mound is situated on Vela Glova, whose slopes contain numerous barrows of varying sizes and shapes. Iron age pottery was found in a cave, which was about 20m deep, on a southern ridge of a steep slope in a locality known as the Ratina Cave (Ratina spilja).

There was a stoneworks on Šćedro called ‘Stare stine’ (‘Old Stones’), which supplied gypsum for the Baroque chapels in Hvar Cathedral.

There was an early Christian church in the Mostir Bay, which was taken over by Benedictine monks from the Augustinian monastic order in about1482. As the Church of Our Lady of Mercy, it became part of the Dominican Monastery which was founded in 1486. The first mention of a chapel on Šćedro is contained in medieval documents dating to 1460, where it is referred to as ‘ecclesia in mare‘ (‘a church in the sea’), because an altar erected on the waterfront was used for Masses for sailors moored in their boats offshore. A reference to ‘St. Mary’s Chapel’ in 1465 shows that the church was dedicated to Our Lady before the Dominicans took it over. Alongside the monastery, a quarantine facility was established to serve the needs of the mariners. The monastery was abandoned in the 18th century, after which it fell into ruins.

The remains of a Roman villa maritima have been found in the Rake Bay, with pottery finds and the remains of a mosaic, now underwater. The site is protected while it is being researched, so visiting it at close quarters is prohibited for the moment.

According to the 1331 Hvar Statute, Ščedro was a property for the common good, providing pastureland for Hvar Island. Because of the water produced by night-time dew, cereals could be cultivated, and up to some 60 tons of corn were produced. There were also vineyards and olive groves, remnants of which can be seen on the overgrown stone mounds among the undergrowth. In the 19th century, much previously public land came into the ownership of wealthy Hvar citizens. On Šćedro, the Duboković-Nadalini family from Jelsa owned much of the island’s land. Families from Pitve settled on the island to farm the land, continuing the tradition of cultivating vines and wheat, and raising sheep.

At present there are just four permanent residents who overwinter on Šćedro, with the number rising to 21 during the rest of the year. The island’s fields are still farmed, and the particular climatic conditions are excellent for cultivating a variety of crops, especially for producing olive oil and honey of the highest quality. Tourism is the main source of income, and the island is a supremely attractive nautical destination. The island does not have mains electricity or running water. Basic energy needs are covered by photovoltaic and solar panels, and water is supplied from rainwater tanks. Šćedro is the perfect place for a peaceful, restful holiday, an ideal escape from the frantic pace of life which technology brings.

Although so few people live on it, the island is far from abandoned or neglected, especially since the ‘Friends of Šćedro Island Association’ (Udruga Prijatelji otoka Ščedro) was formed in 2011. This energetic group has organized several clean-up operations on land and sea each year, besides clearing and improving the fire roads and walking tracks across the island, participating in the archaeological research projects being undertaken on land and under the sea, initiating a project to restore St. Mary’s Church, and much more. They also take care of the island’s wildlife. See the ‘Friends of Šćedro Island’ website and Facebook page.

How to get to Šćedro

From Jelsa, you go by road to Zavala via Pitve and the old Pitve-Zavala tunnel. From Zavala there are fairly regular taxi boats which go to the harbours at Mostir and Porat during the summer months.

There are lots of moorings for private yachts, and there is also a helipad on the island.

What there is to see
– Signposted paths will help you to explore the island on foot.
– The remains of the 15th century Dominican Monastery of St. Mary of Mercy, Mostir Bay
– The Nastane settlement
– The island’s highest point, called ‘Vela glova’
– The Ratina Cave
– Šćedro’s little bays offer exceptional diving opportunities.

Where you can eat and drink

Where you can stay

Šćedro celebrates its feast day in honour of Our Lady of Mercy at the beginning of July each year. A concelebrated Mass is held in the ruins of the chapel at Mostir, after which there is wining, dining and singing for the rest of the day, in true Dalmatian style. 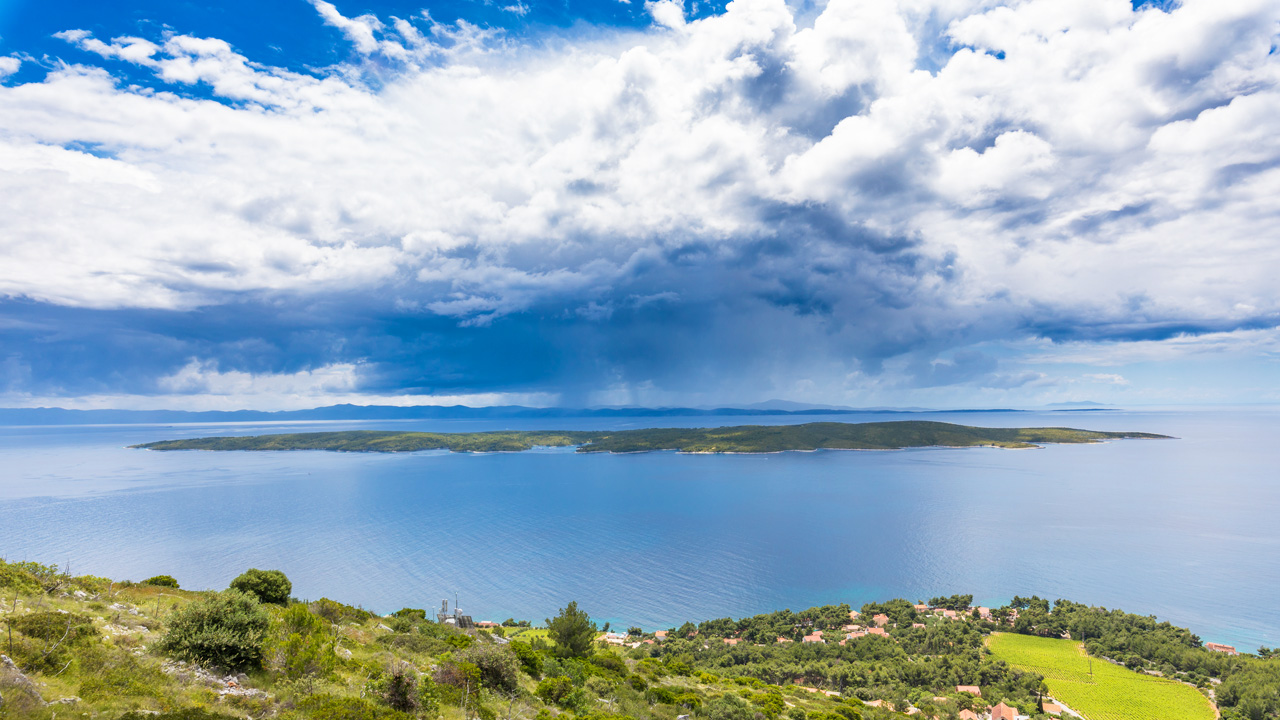 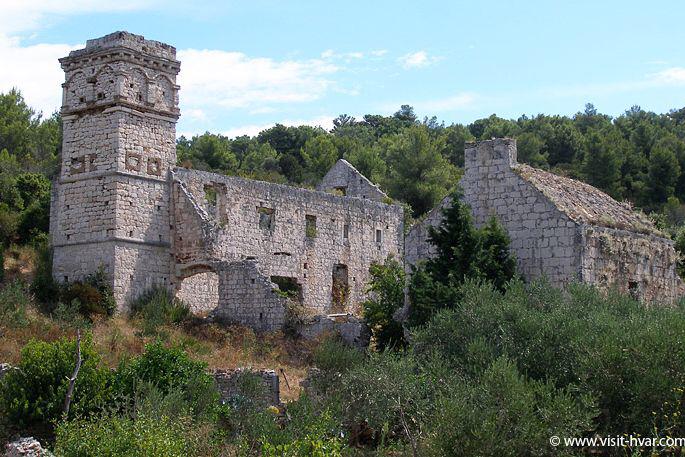 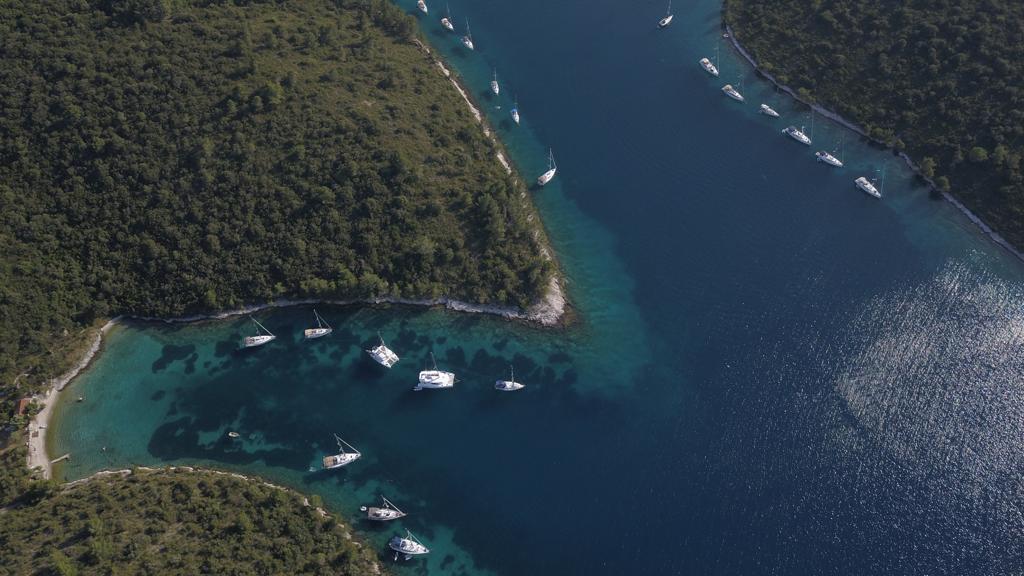 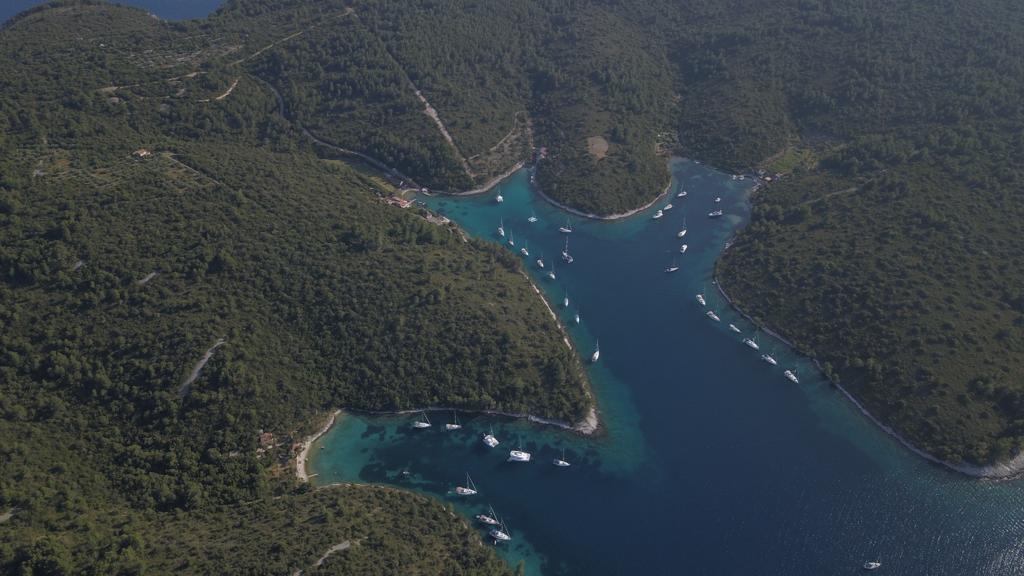 Šćedro lies just off the coast of Hvar Island, opposite Zavala 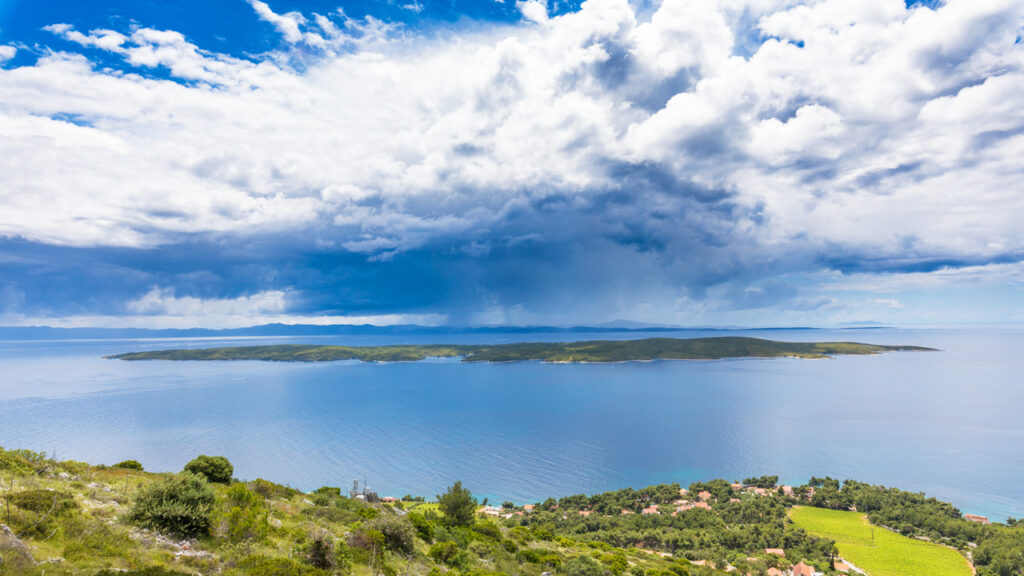 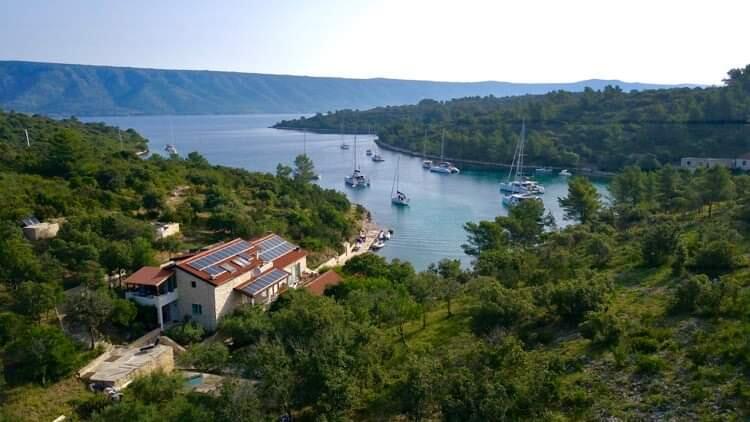 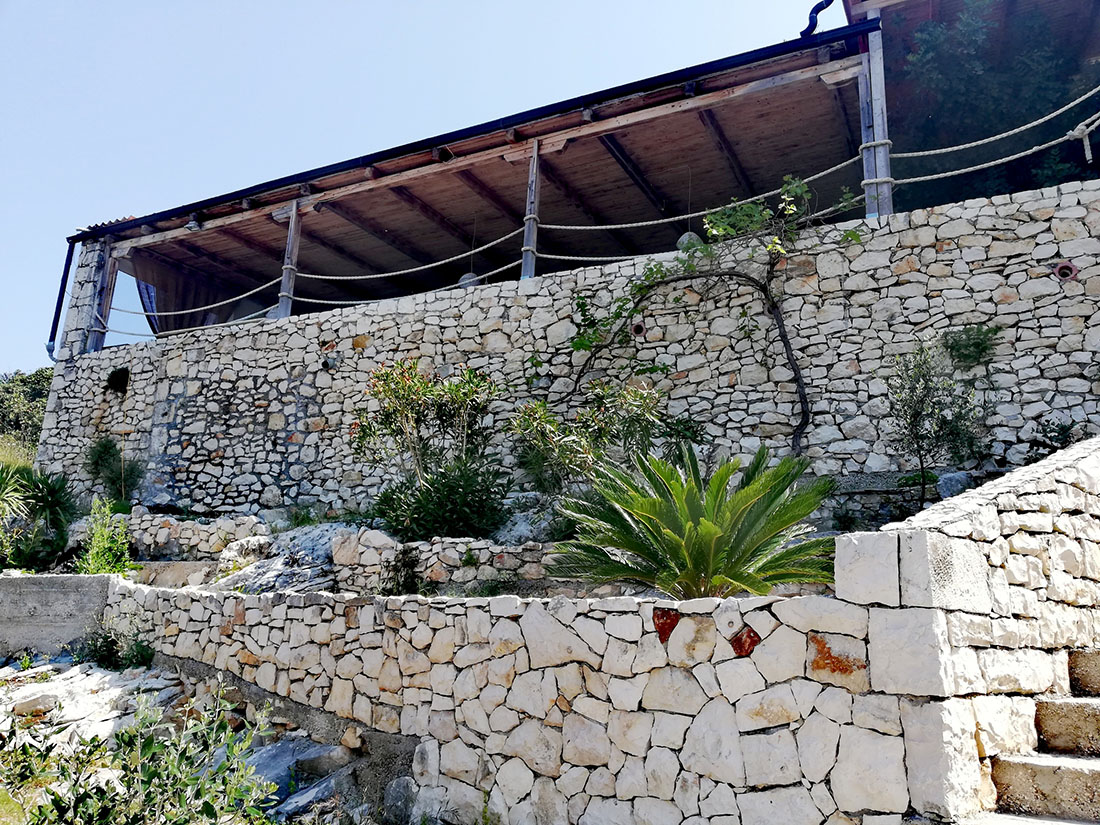 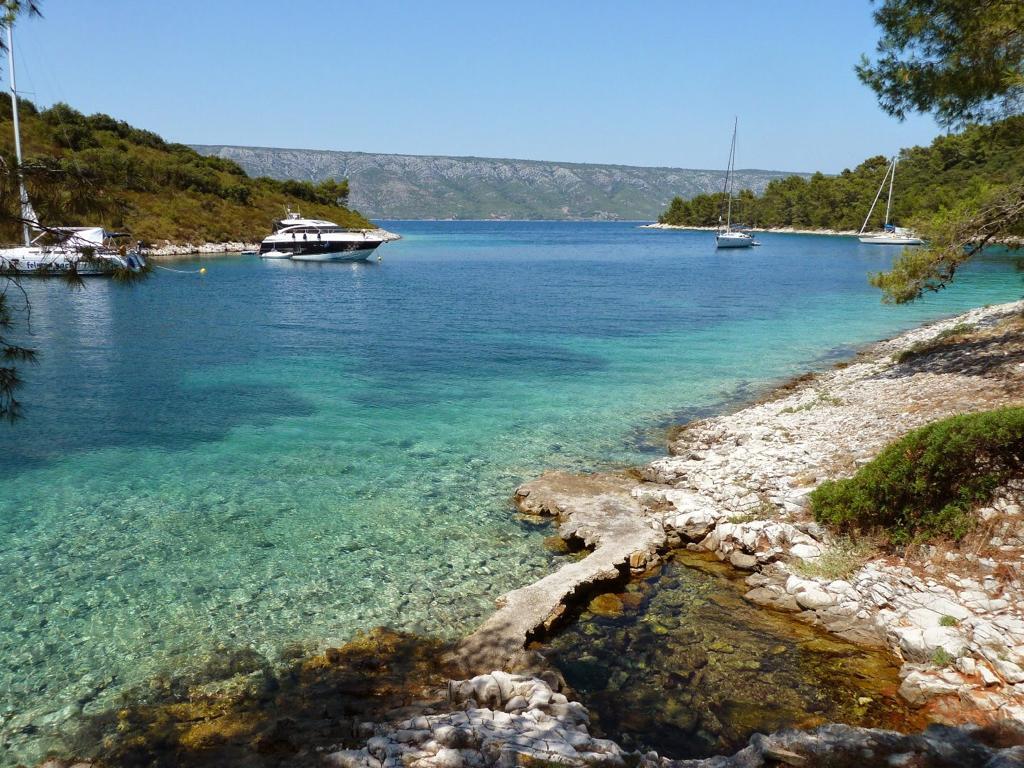