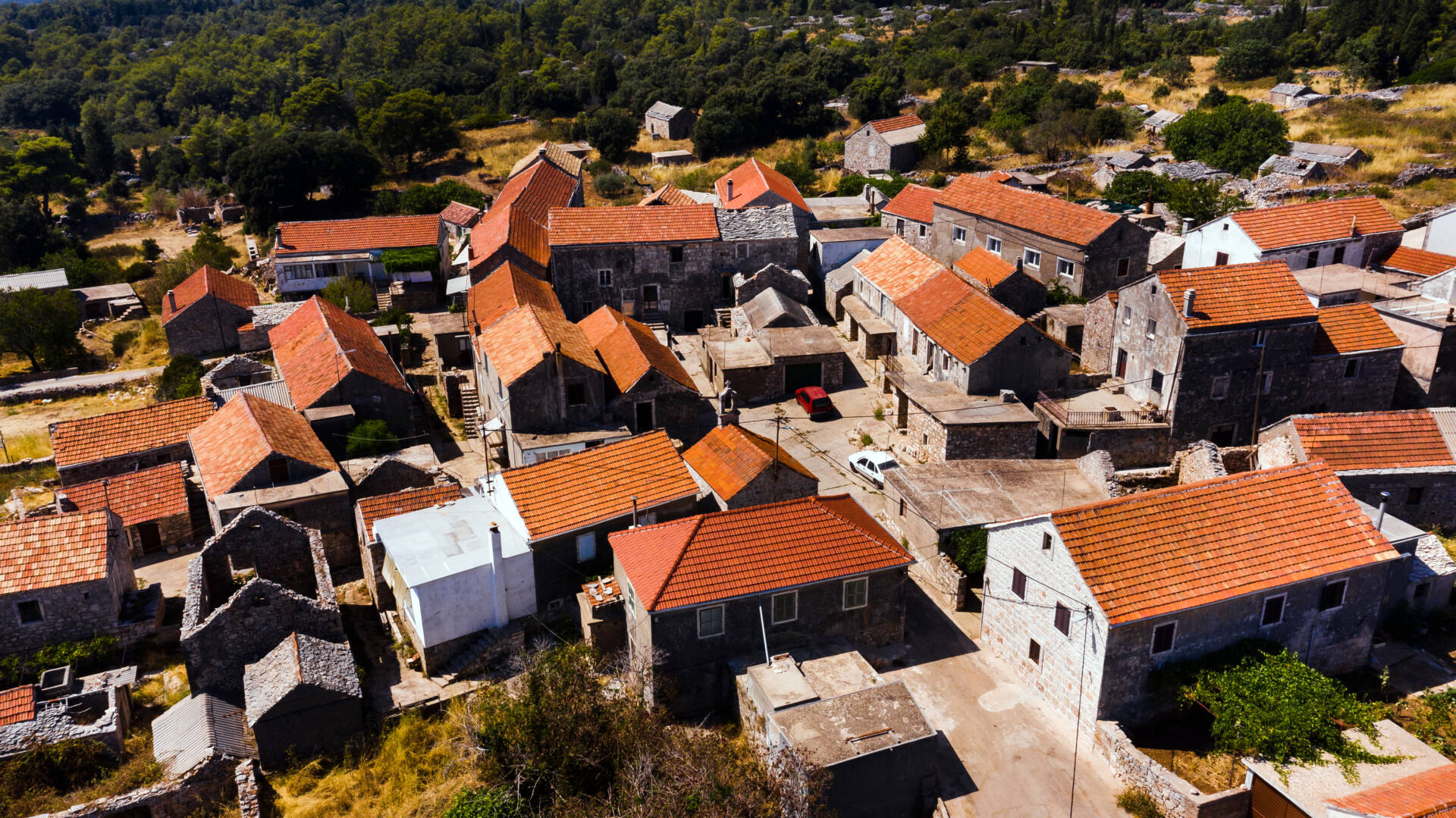 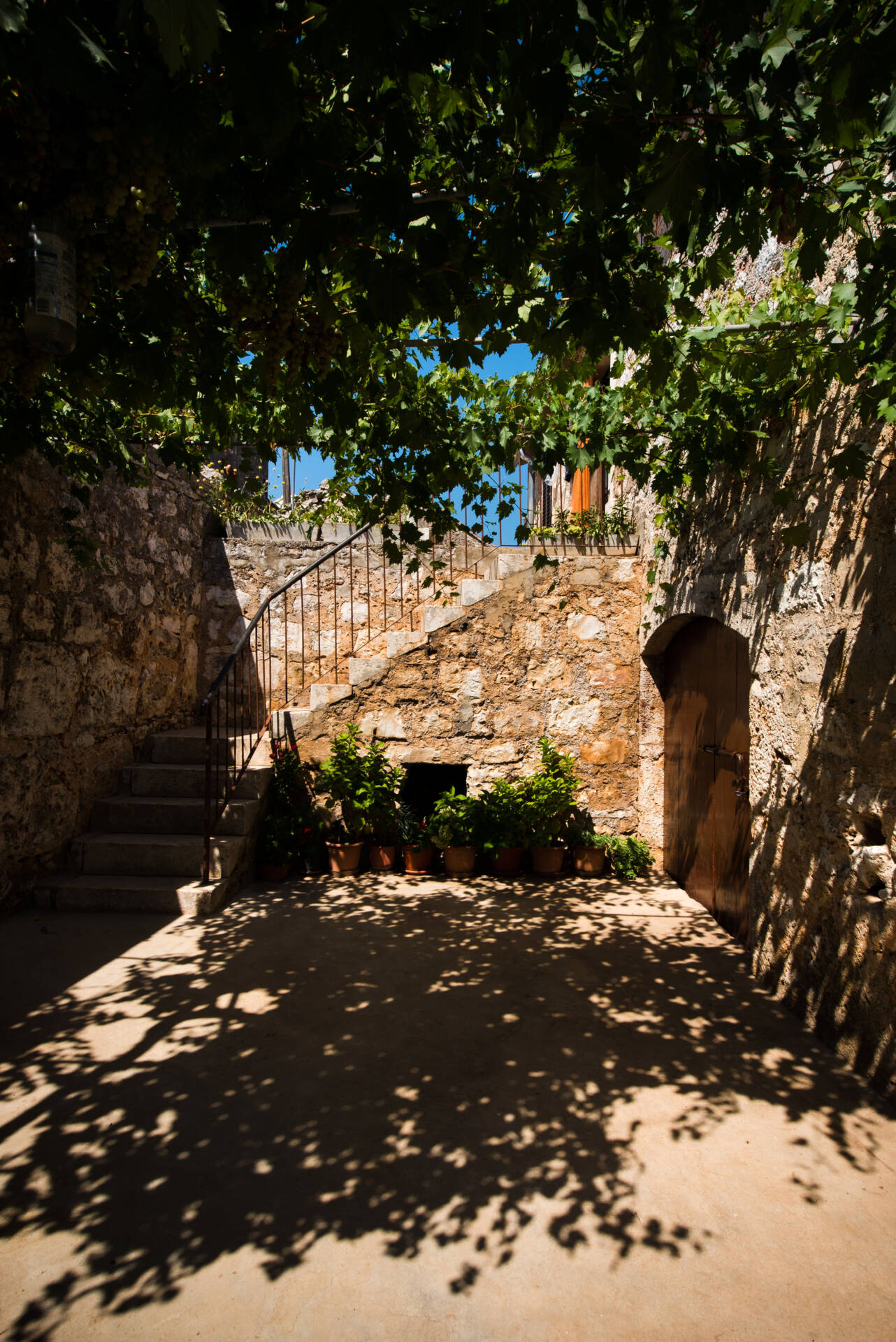 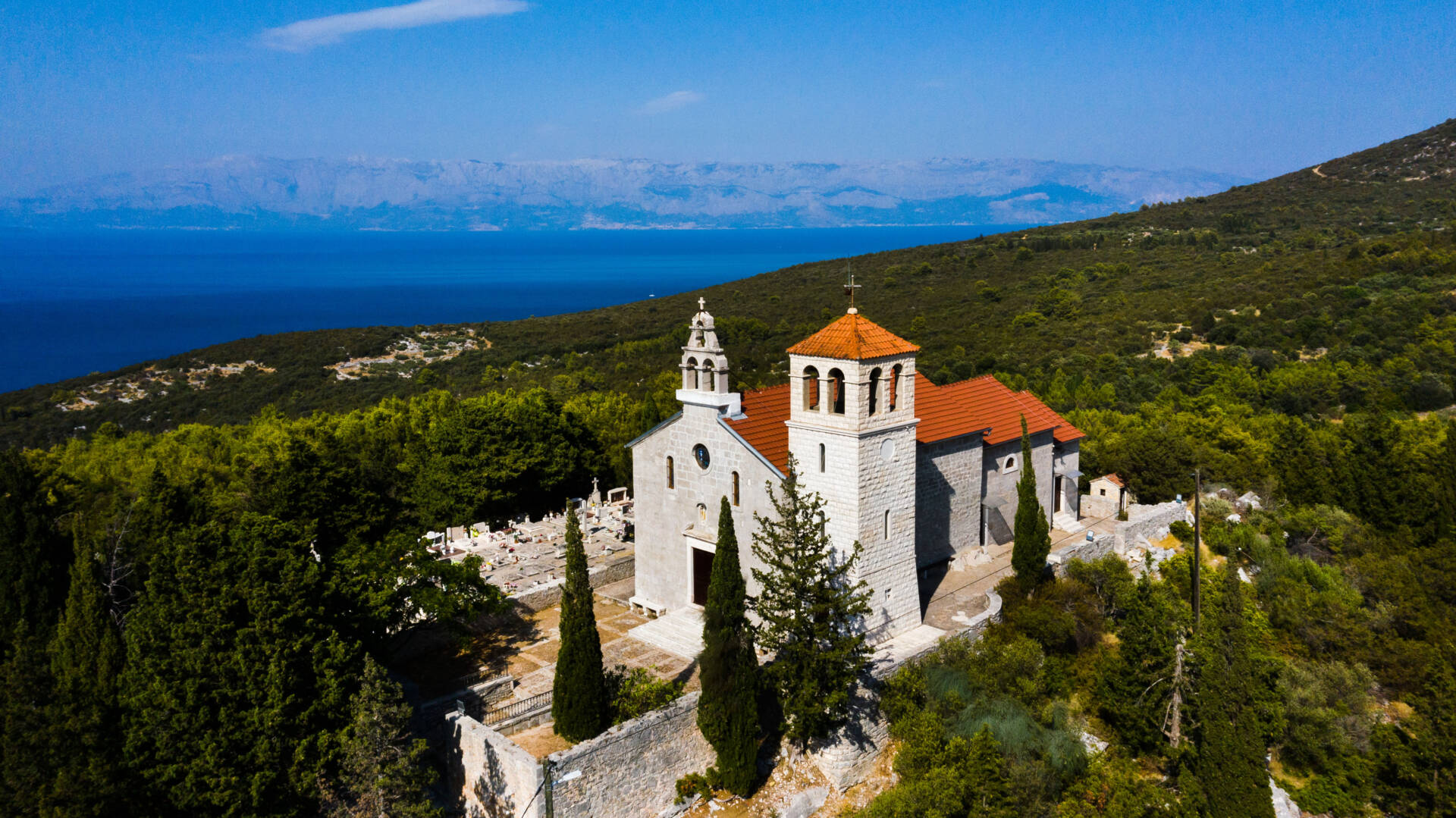 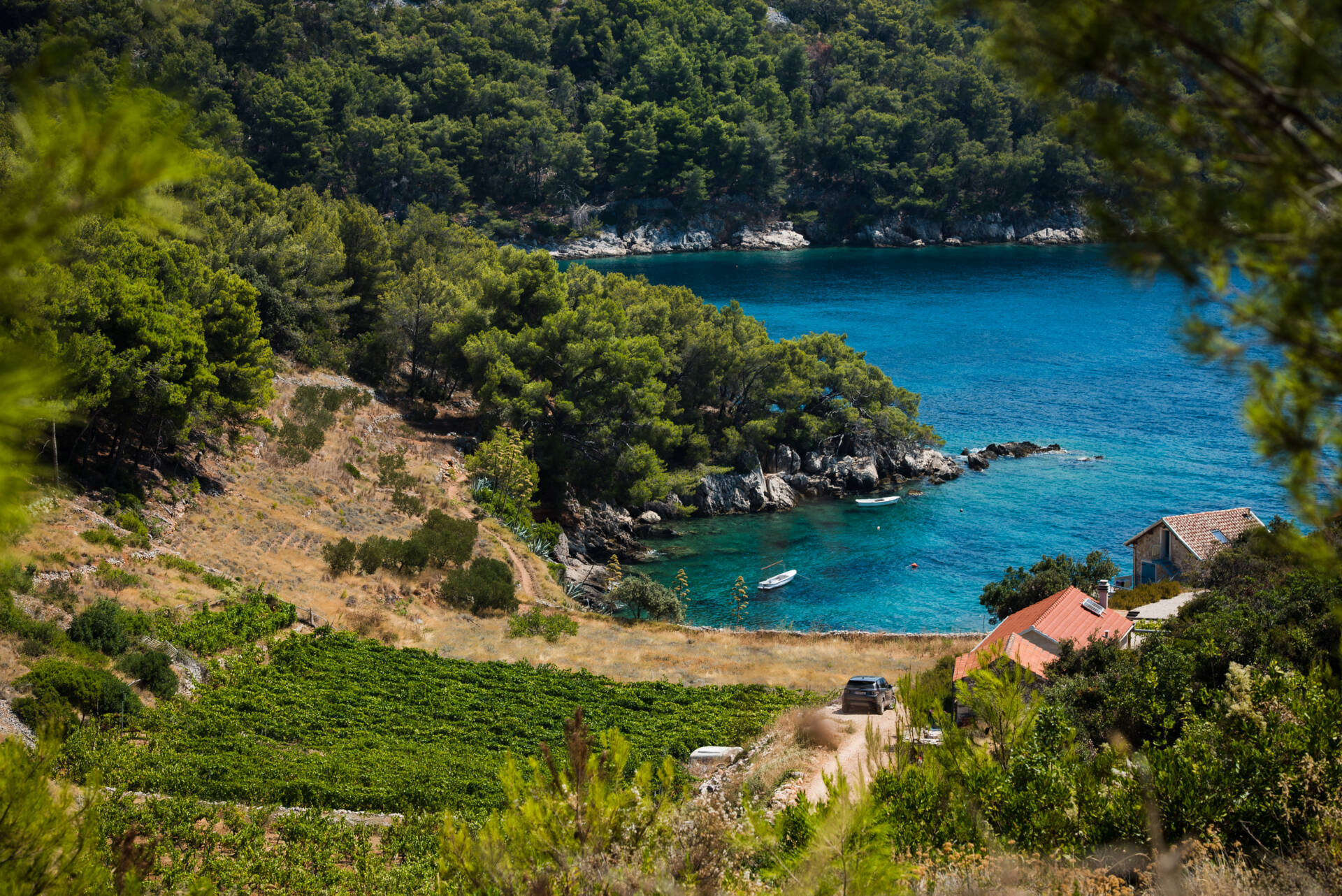 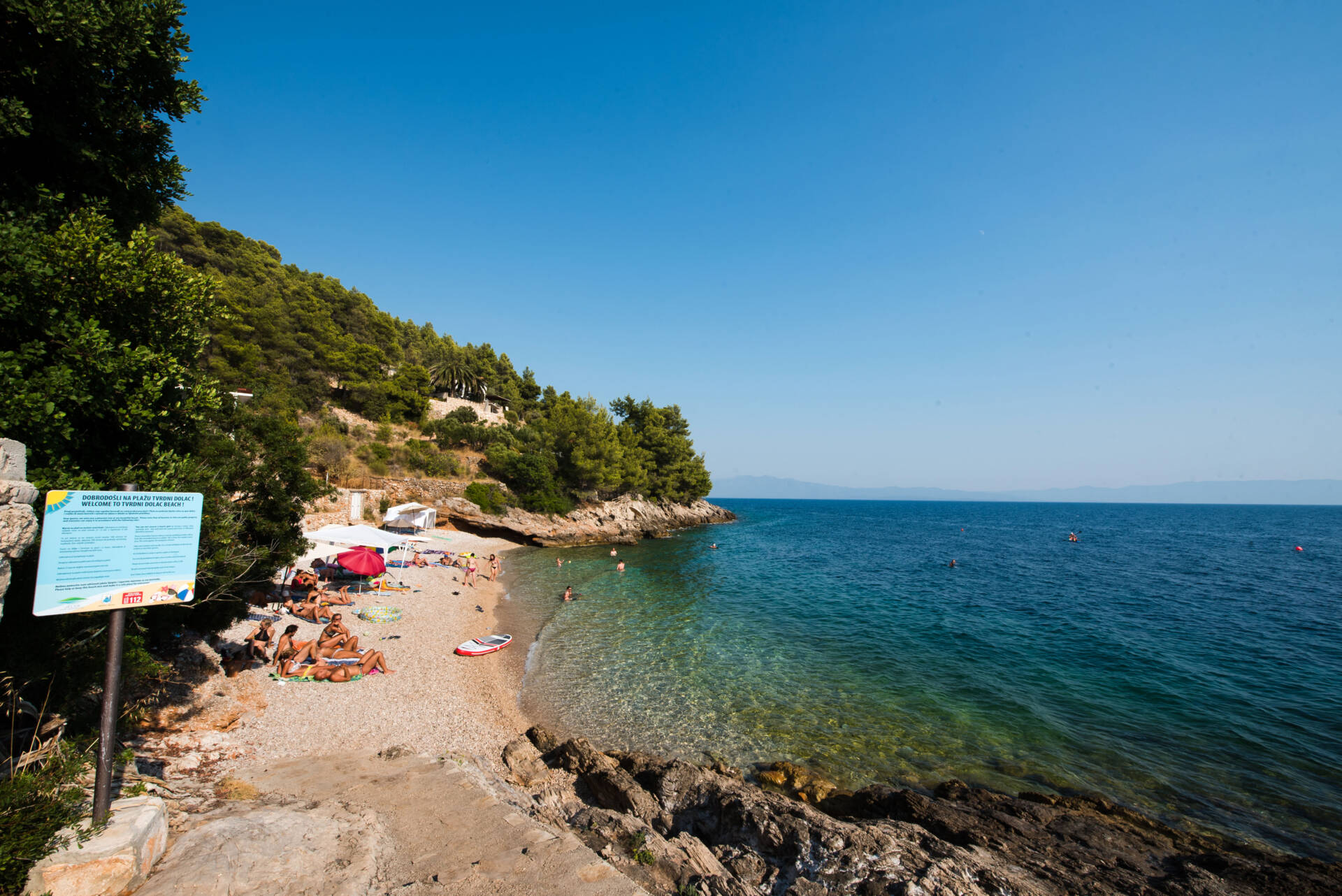 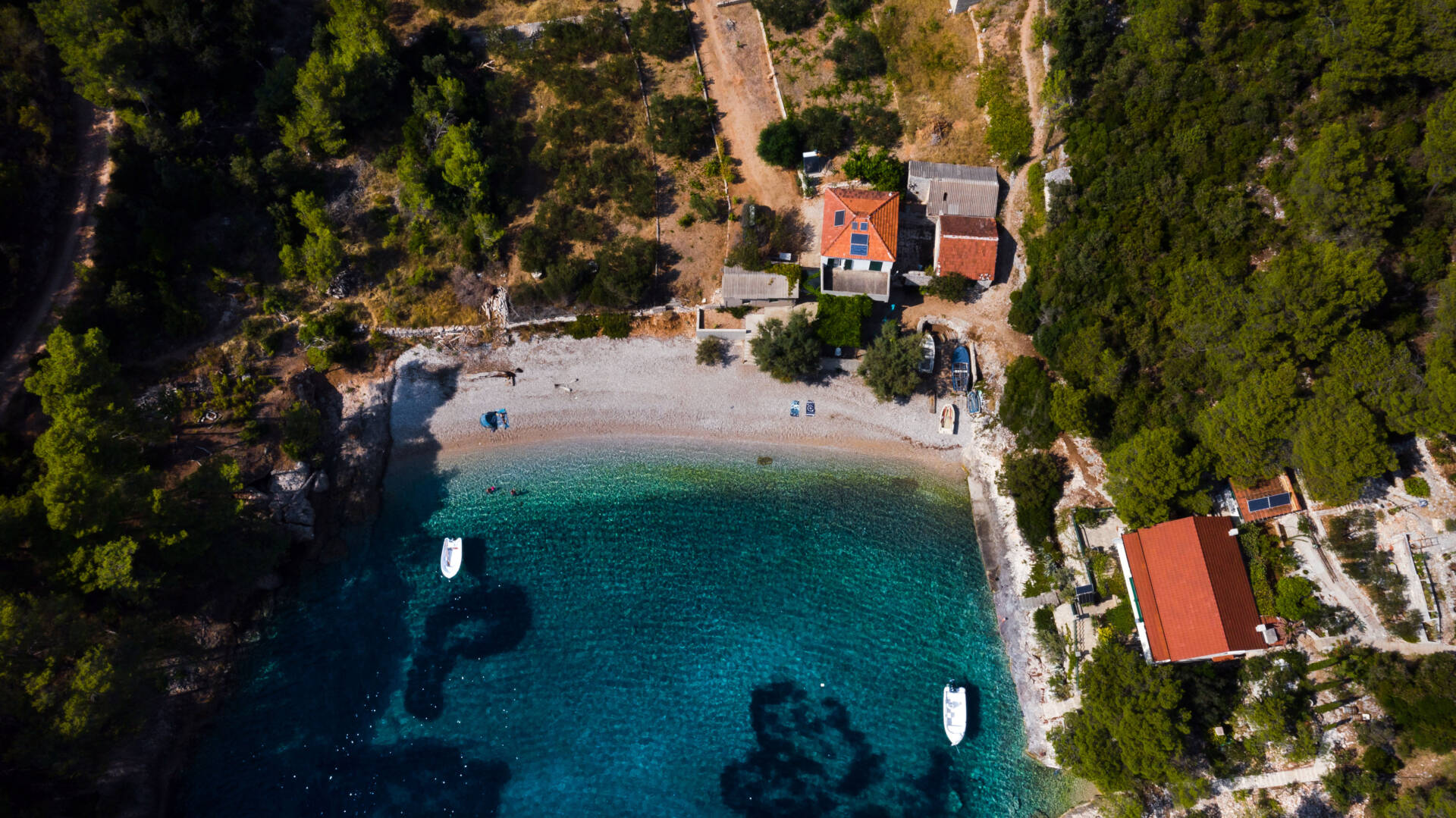 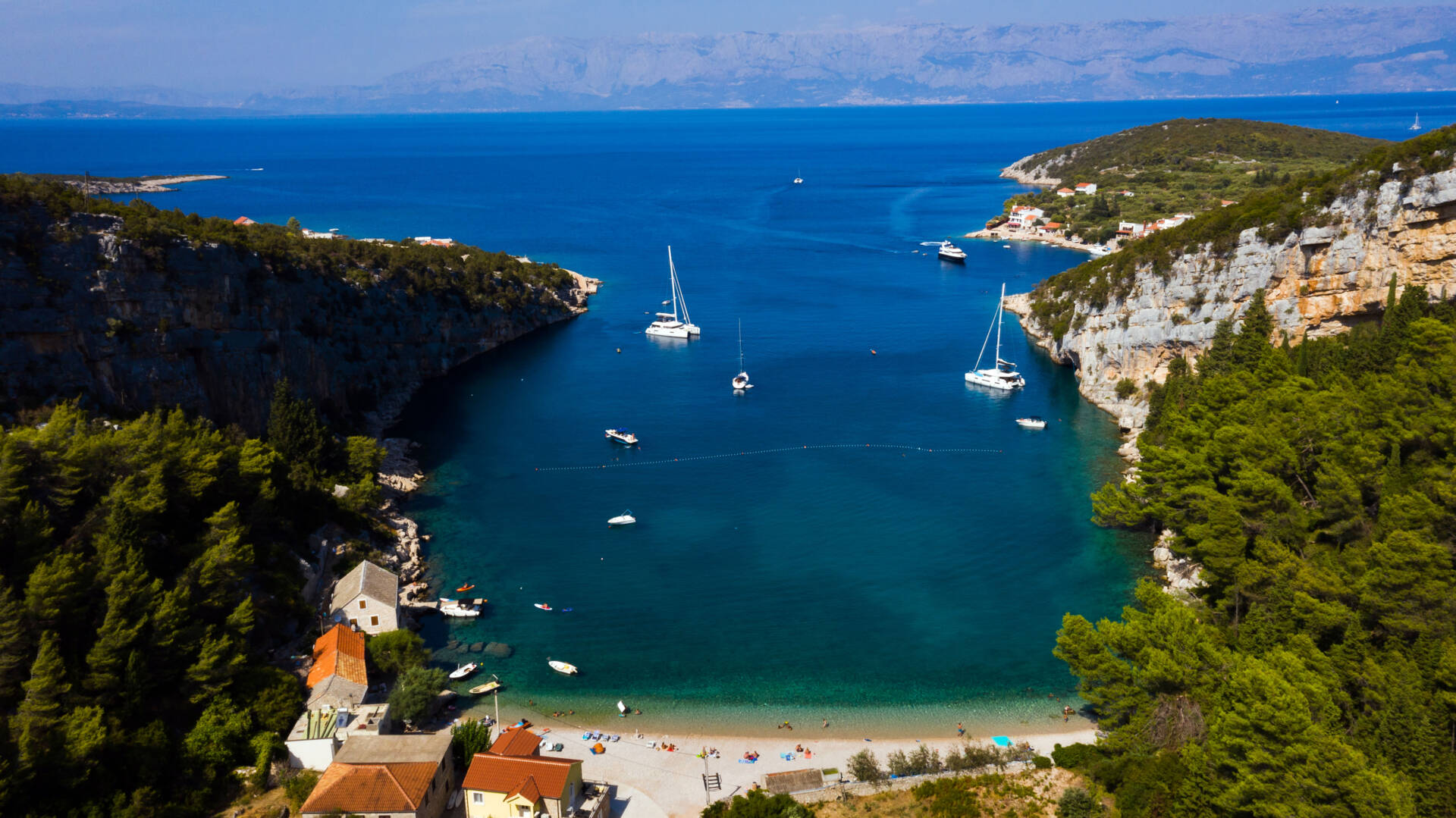 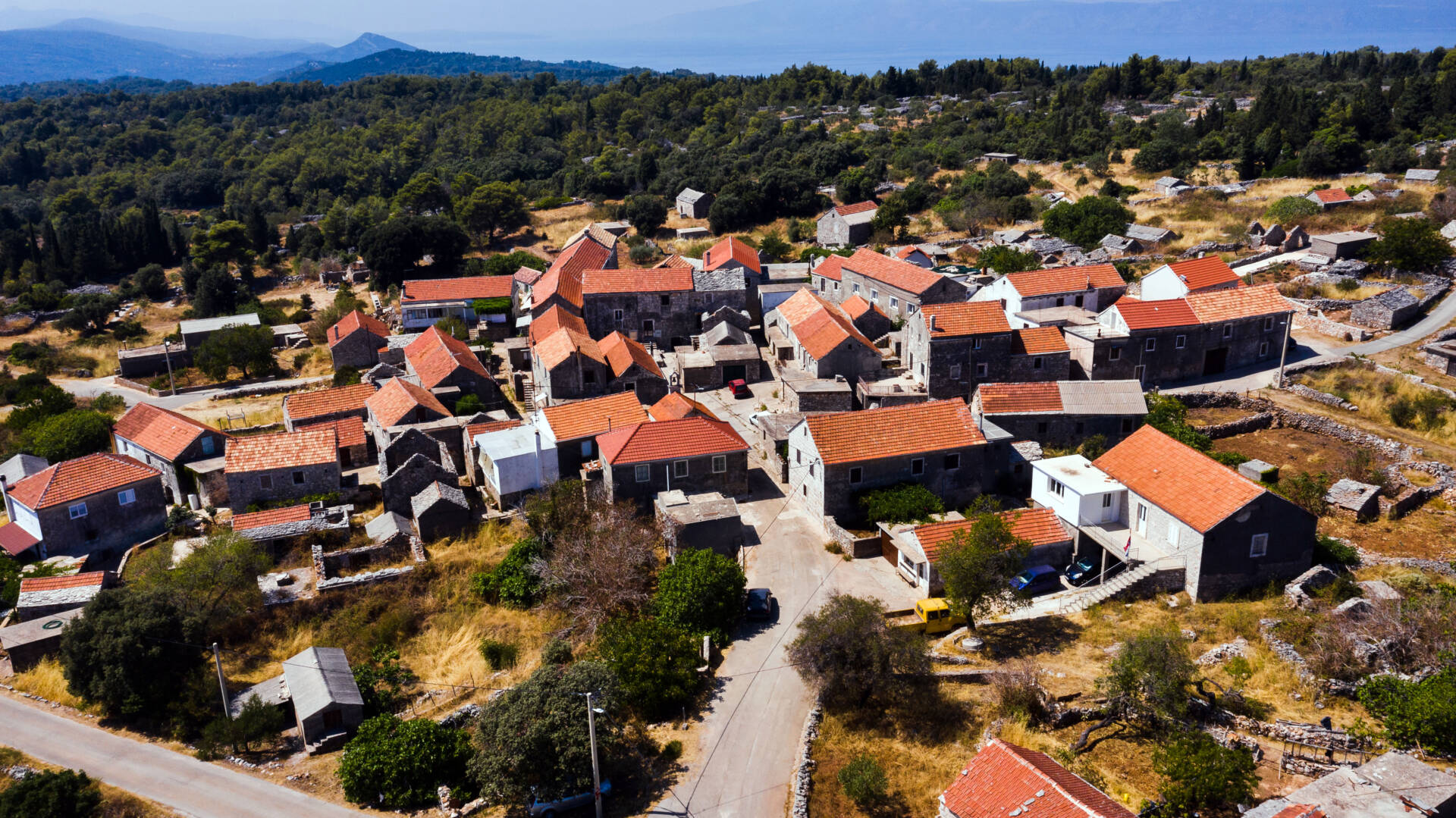 About Gdinj
Gdinj is 25 km east of Jelsa, and 24 km west of Sućuraj on the eastern tip of Hvar Island. It is 361 m above sea level. Like Zastražišće, it consists of several parts, spreading over the north and south sides of the island. Dugi Dolac, which is 2 km from the centre of the village, is the part nearest to the main road. The other parts are Nova Crkva (‘New Church’), Stara Crkva (‘Old Church’), Banovi Dvori, Vrvolići, Visoka, Talkovići and Bonkovići.

History
Gdinj dates back to at least the 14th century, probably starting out as a shepherds’ settlement at the time. It is mentioned in the 1331 Hvar Statute as being in the area called ‘Plame’, the name still applied to the eastern end of Hvar Island, although its precise meaning is unclear. It is likely that the area was inhabited long before, in prehistoric times, partly because the name Gdinj is thought to derive from the word ‘bditi‘, meaning ‘to watch‘, but mainly because several sites of prehistoric burial mounds (barrows) and cist graves (stone coffins, or ossuaries) have been found in the vicinity by archaeological researchers.

Some of them were destroyed when the island’s roads were asphalted in the 1969, but some are still visible and are protected sites. A very big mound, appropriately named Vela Gomila, was found about 300 m from Gdinj. It was 6 -7m high, 20 m wide and 25 m long, and inside were two stone-tiled graves whose bodies were orientated east-west and laid in the supine position. Some ceramic fragments, a bronze ring and part of a dagger were found on the site. Having two graves inside made this mound unusual on Hvar, where the mounds usually house only one. The size of the mound and the artefacts suggest that it dated from the Bronze Age, when grave mounds were bigger than in the later Iron Age. The supine position of the bodies suggest a Greek influence. Not far from Vela Gomila were two other mounds, called Paklina and Mušina Duža, which were round, the former 6 m, the latter 15 m in diameter, in which the bodies were tucked in the foetal position, so they are thought to be probably Illyrian. The Mušina Duža mound was encircled by a stone wreath, the first to be found on Hvar. Cvitna gomila on the edge of Banovi Dvori is a large burial mound, with a small house built into the side of the mound.

Buildings
Architecturally Gdinj teems with interesting complexes of stone houses with courtyards, with olive groves and vineyards all around. There are several churches and chapels. The parish church is the Baroque-Renaissance Church of St. George, which dates back to the 16th century, is 800 metres from the centre of the village, and is surrounded by imposing cypresses. When the feudal system prevailed on Hvar in the 15th and 16th centuries, land was owned and controlled by patrician families. One of these in Gdinj was the Kašić (Cassio, later Kačić) family, who owned The 15th century church of St. Lucy in Vrvolići, the oldest church in Gdinj. The little church of St. Rocco at the east end of Dugi Dolac is thought to date from the 15th century, although it was first mentioned in 1627 as a rural chapel which was not used for services. St. Rocco’s chapel at the west entrance to Dugi Dolac was built in 1901 by Mate and Toma Ćurin. The chapel of St. Peter in Visoka was built towards the end of the 19th century. The chapel to St. Stephen the First Martyr in Banovi Dvori was built by the Juraj-Zore brothers, Ivan Banović Stipanovi and Antun Jurasović around 1900. Ivan Bonković built the chapel to St. John the Baptist over an earlier structure in 1898. Several of the churches were restored through local initiatives over the years.

Visoka War memorial
On the road to Visoka there is a large war memorial with an obelisk dedicated to those who fell during the Second World War. Visoka is a collection of charming old stone houses, the more opulent ones belonging to the Visković family with balconies and courtyards, the poorer shepherds’ shelters simple structures, built without mortar. Traditionally, old stone houses were often ‘grouted’ with pig-fat for the winter, which of course melted during the summer, to be re-applied at the approach of the colder weather.

People
The people who settled in the villages east of Jelsa from the 14th century onwards came mainly from Hvar’s inland villages, such as Pitve and Vrbanj, but the eastern end of Hvar was also greatly influenced by incomers from the mainland. This meant that animal husbandry and wheat production were important parts of the area’s agriculture, alongside viticulture. It also affected the language spoken, as Croatian has several different regional variations: at the eastern end of Hvar, from Bogomolje to Sućuraj, the language was predominantly ‘štokavski’, to the west of Gdinj in Zastražišće ‘čakavski’ was spoken, while in Gdinj the two variants were mixed together. Gdinj’s population numbered 151 residents when first recorded in 1673, reaching a peak of 809 in 1910, then dwindling to 133 in the 2011 census. Gdinj’s families, especially the Radovanović family, have a proud record of producing successful historians, artists, poets and writers. The Radovanović family house has been preserved as a little personal museum recording the family’s and local history.

Tourism
In modern times Gdinj serves mainly as a tourist destination. With its easy access to both sides of Hvar Island, it offers a wide choice of beaches to the north or south. If you want peace and quiet, a secluded beach can easily be found – perfect for a truly relaxing holiday.

How to get to Gdinj
Gdinj is on the main (116) road which goes the length of the island from Sućuraj in the east to Hvar Town in the west, via Jelsa and Stari Grad.

What there is to see and visit:
* The historic buildings and their layout in the various parts of the settlement.
* You can steep yourself in history,savouring the atmosphere in the archaeological sites nearby.
* The beaches: find a selection of Gdinj’s beaches on the map here; for descriptions of some of the beaches, click here

Special events
*’Following the Cross’: on the morning of Good Friday, there is a procession from Gdinj’s Church of St. George to Bogomolje and back. At the same time, a procession sets out from Bogomolje towards Gdinj. Like the more famous all-night ‘Za Križen’ tradition in central Hvar, the key figures are the Cross-Bearers. Prayers are recited in the churches, and hymns sung along the way.
* St. Lucy’s feast day is celebrated at the church dedicated to her on December 13th, with a concelebrated Mass and a procession. 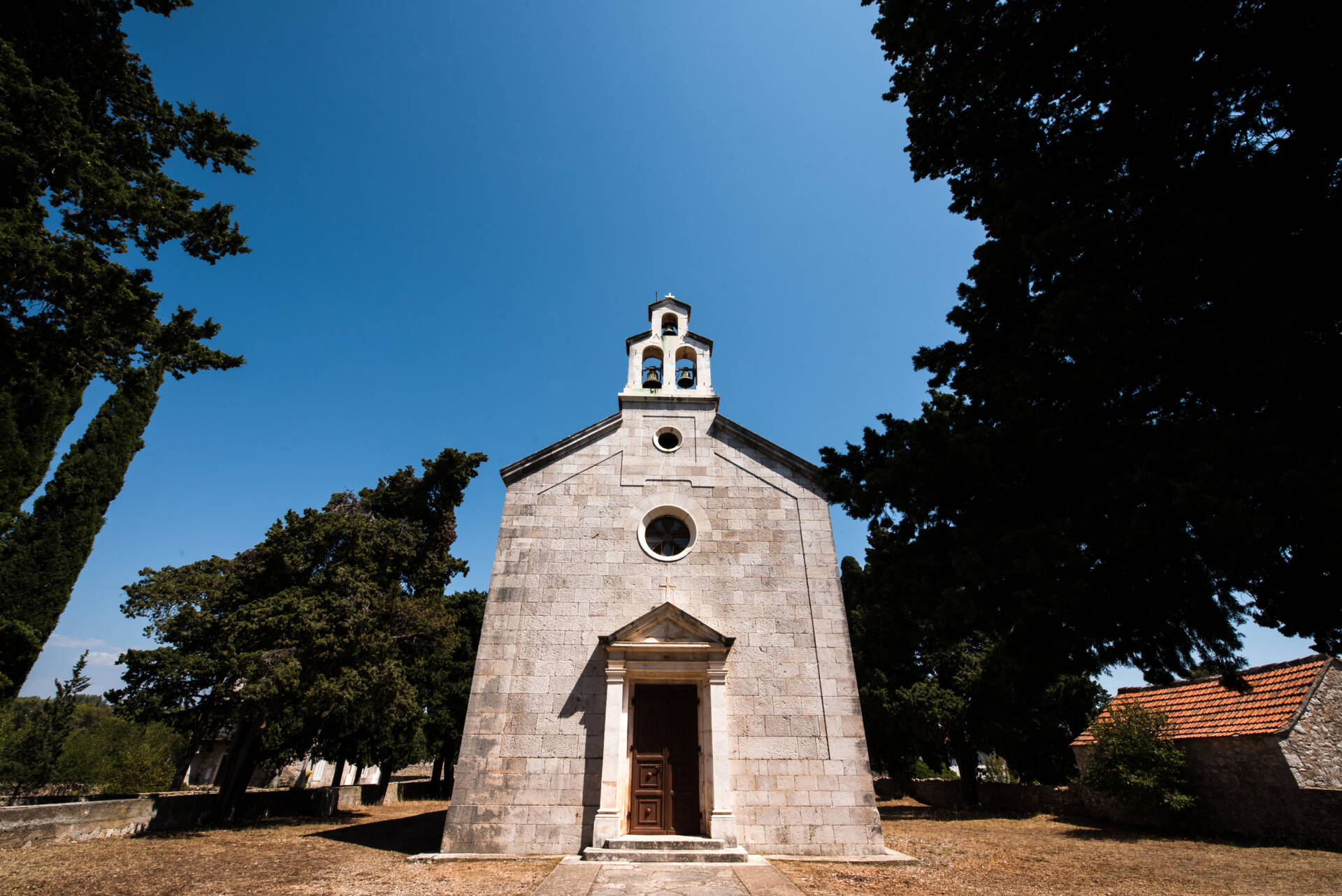 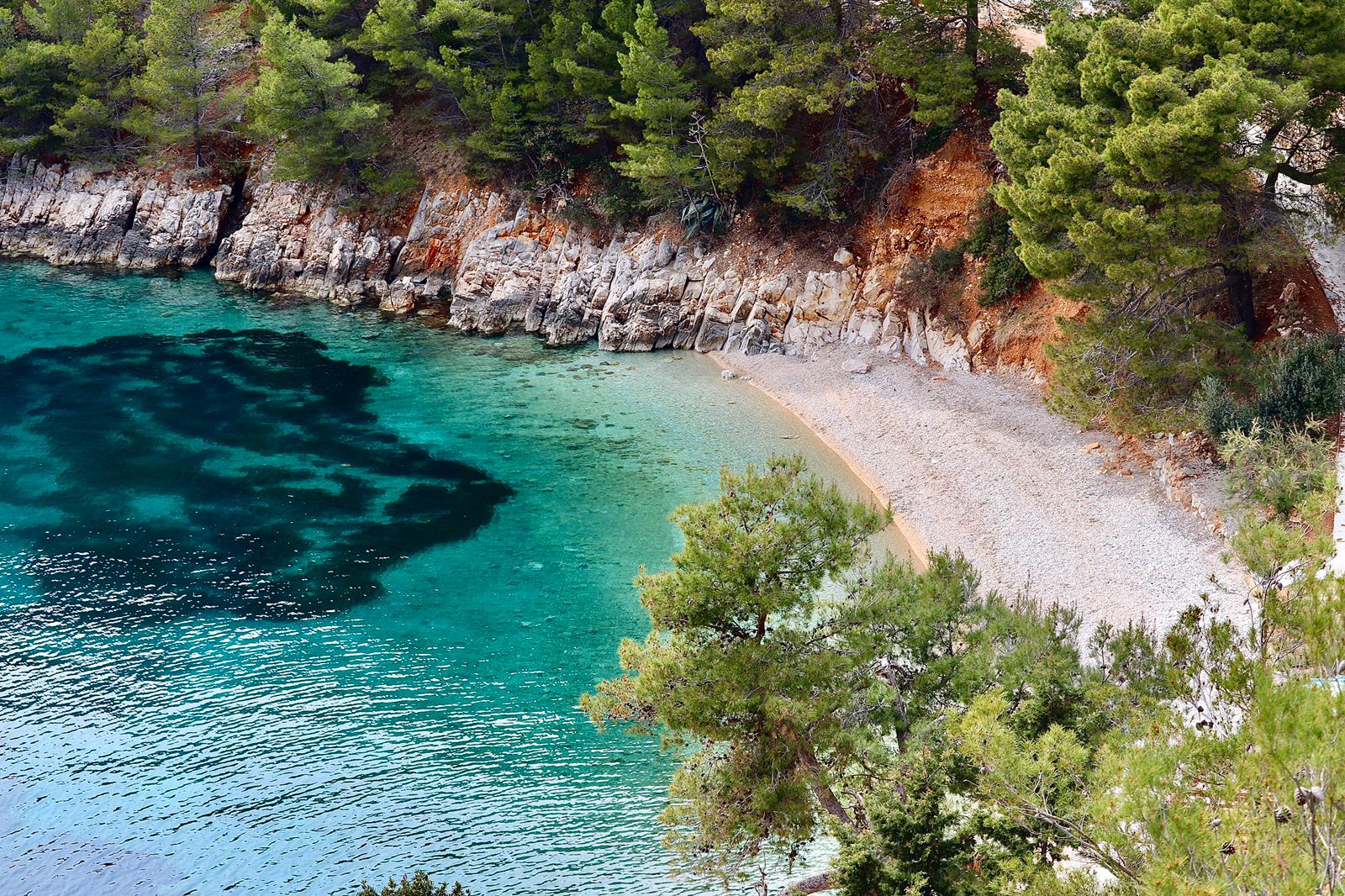 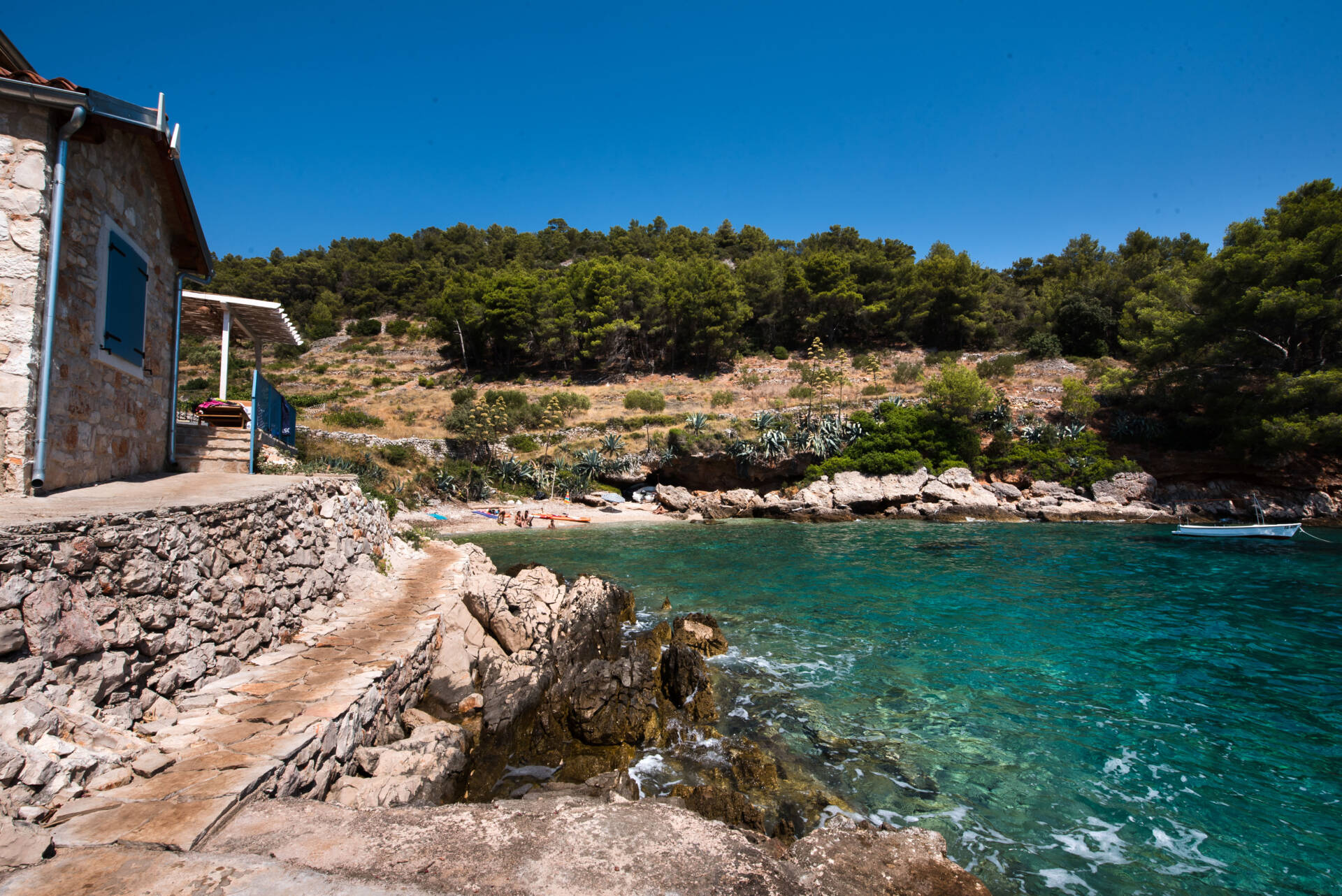 Farming is still an important part of village life in Gdinj 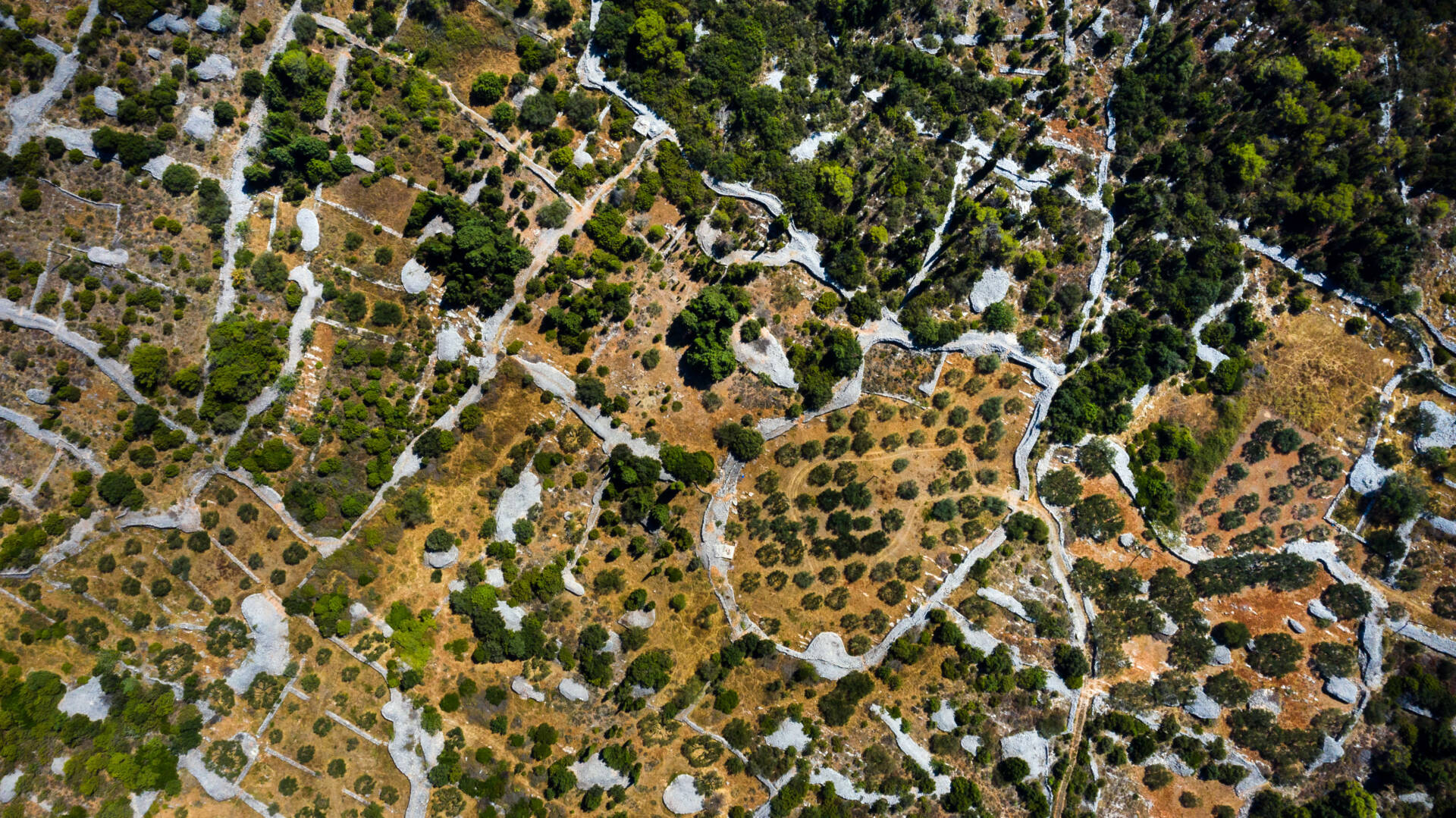 Peace and quiet in one of Gdinj’s small coves 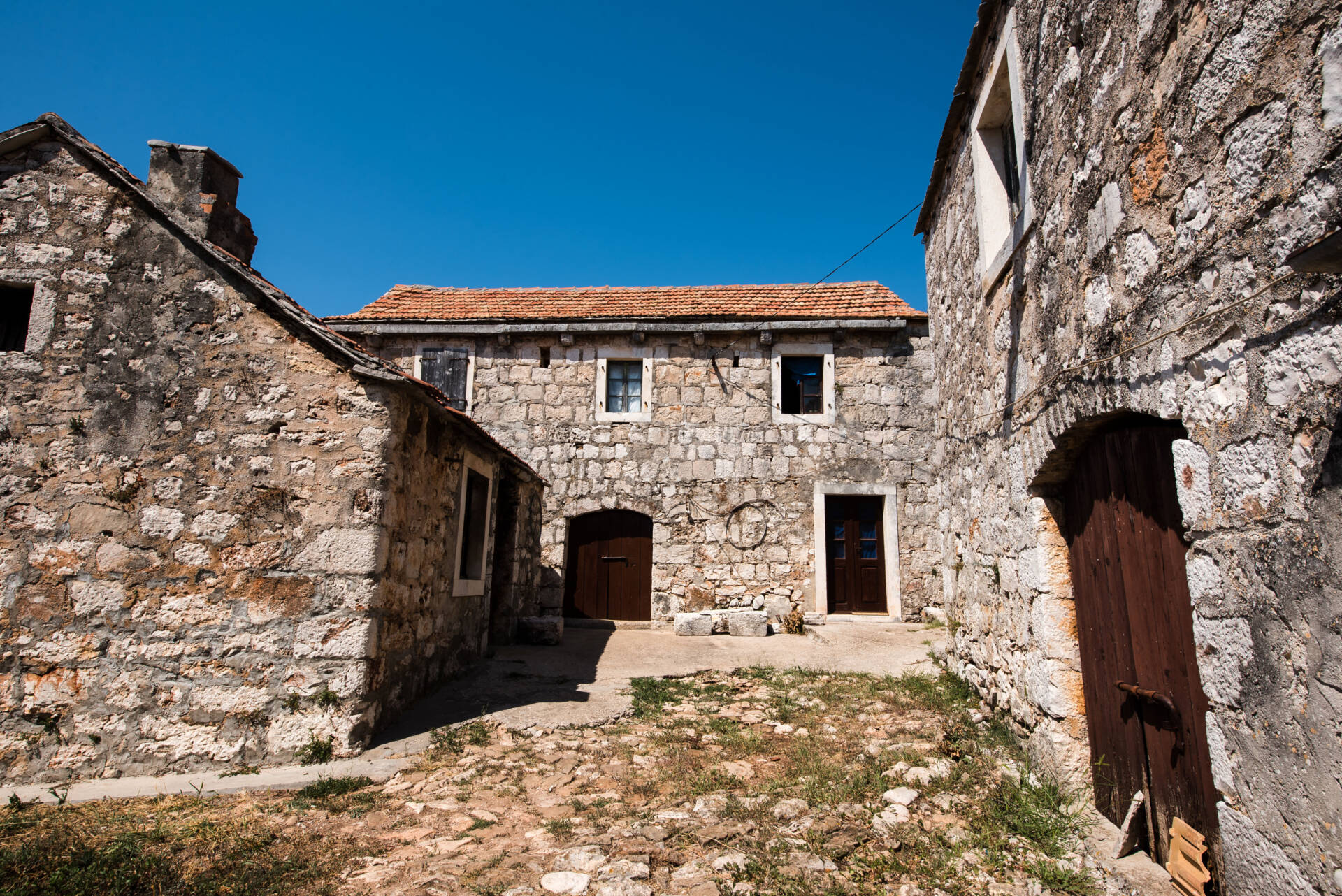 Gdinj is surrounded by breathtaking scenery 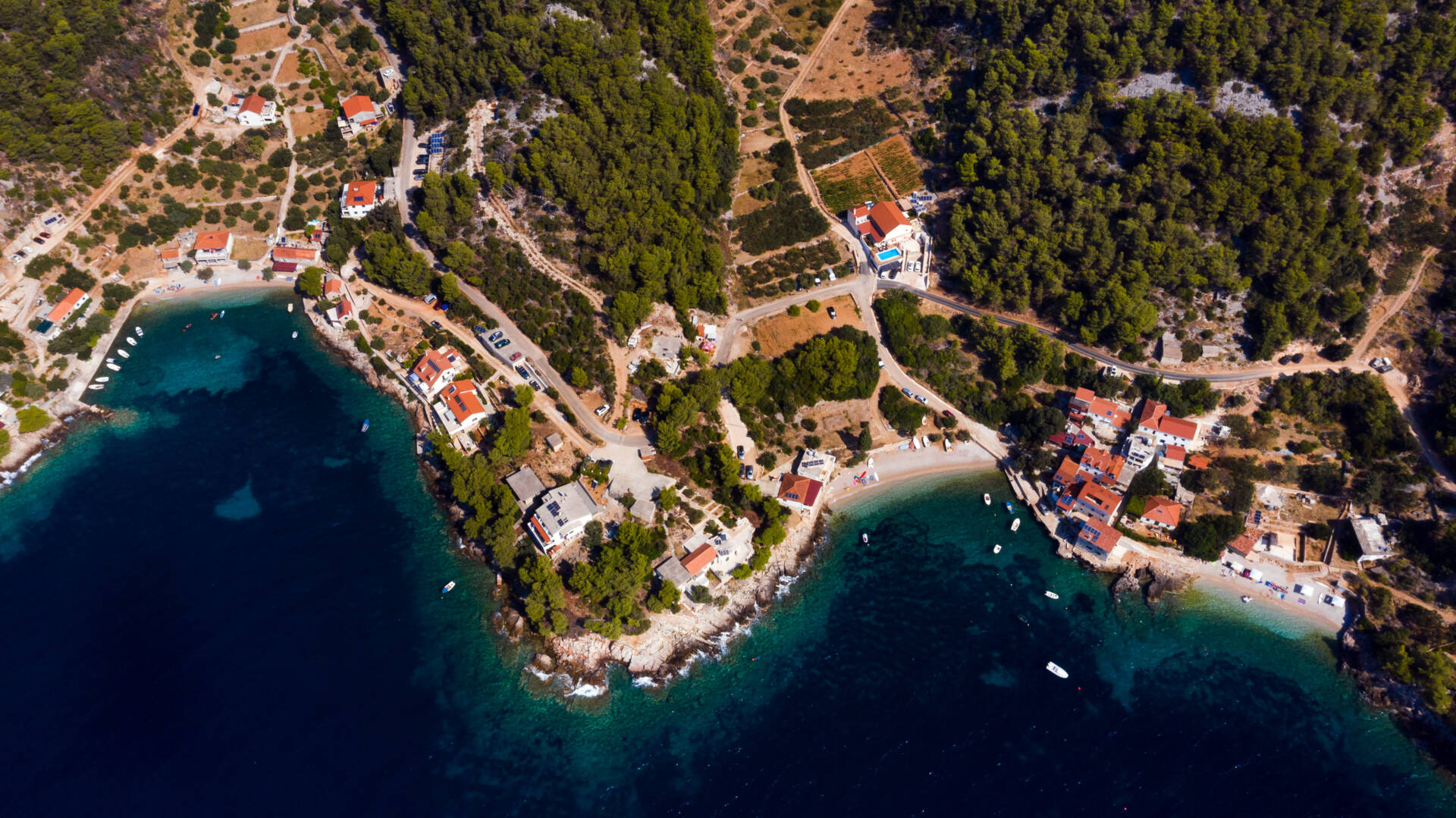 Exclusive private accommodation is available in many of the superb bays 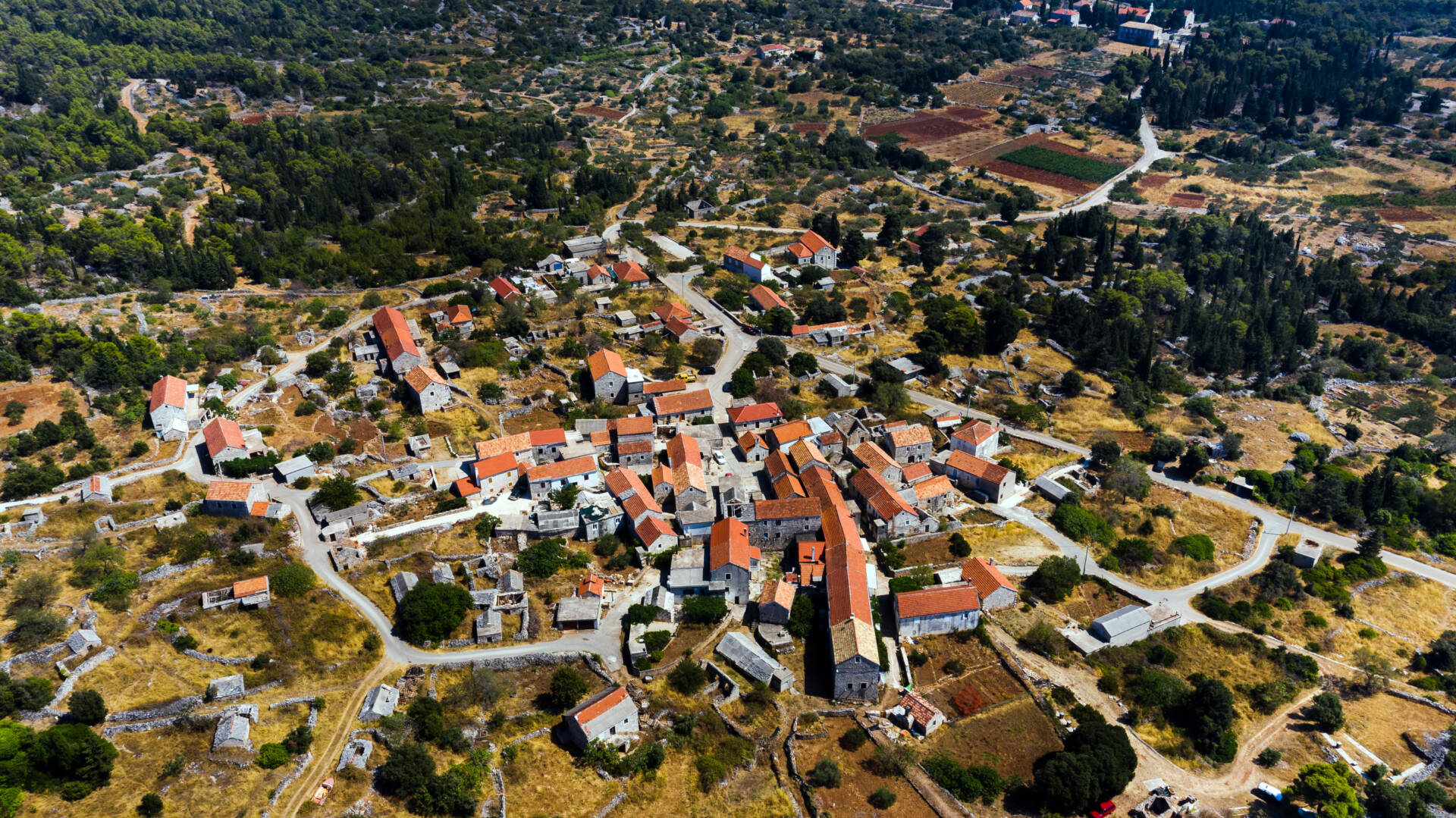 One of Gdinj’s exquisite coves 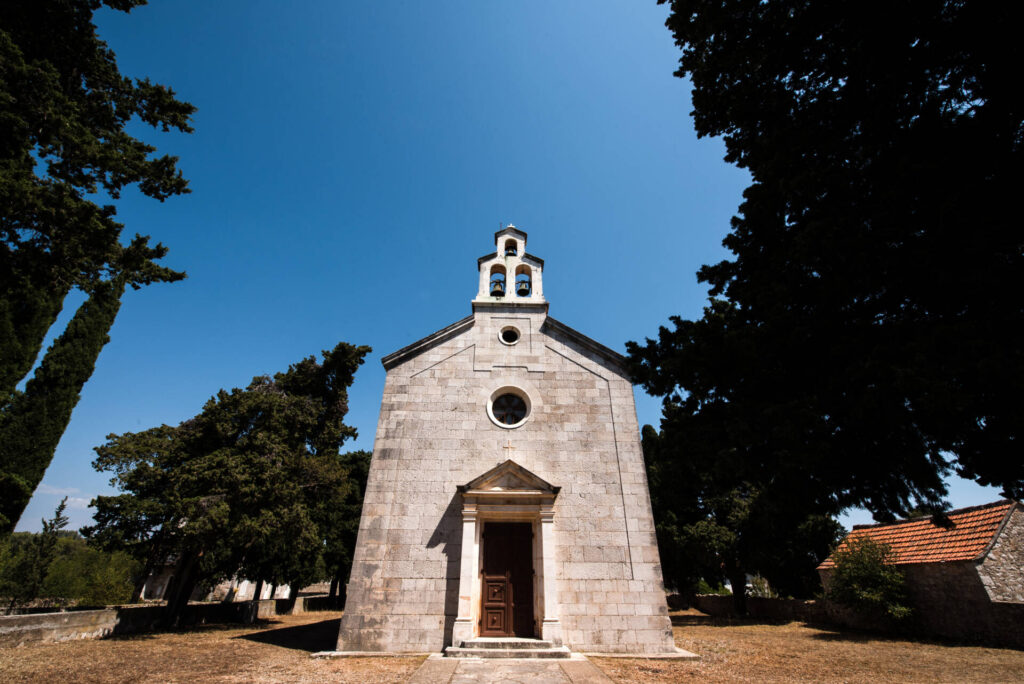 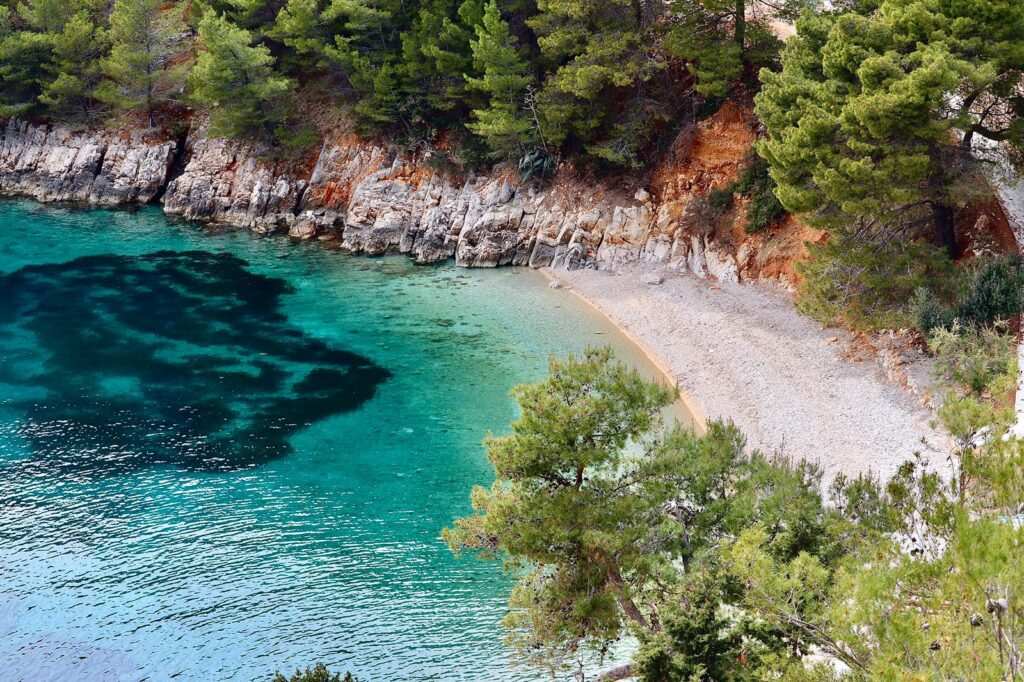 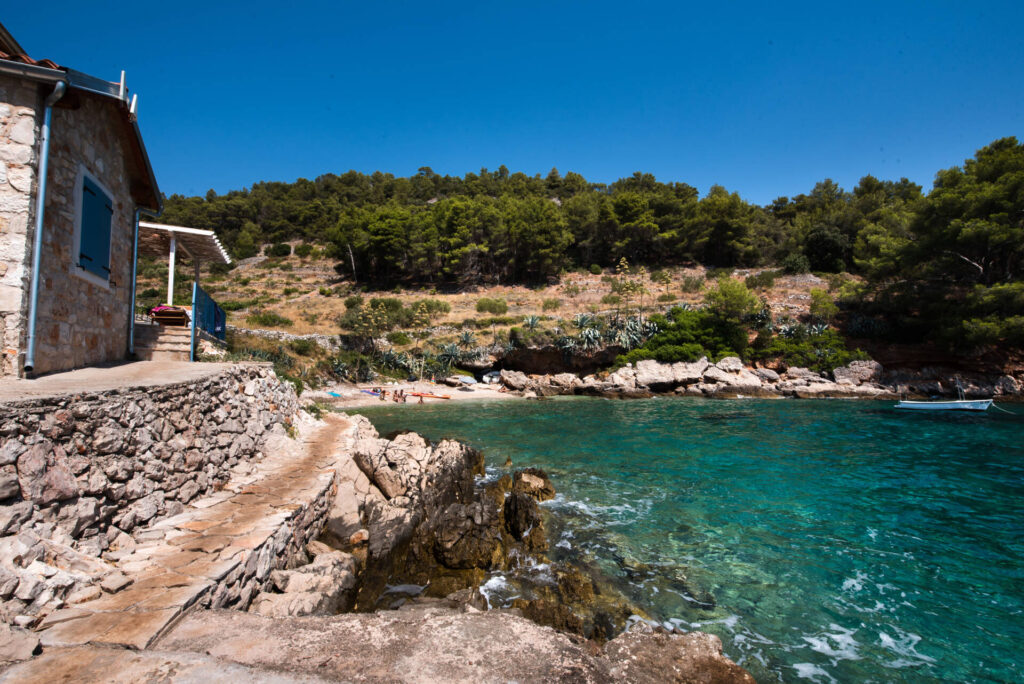 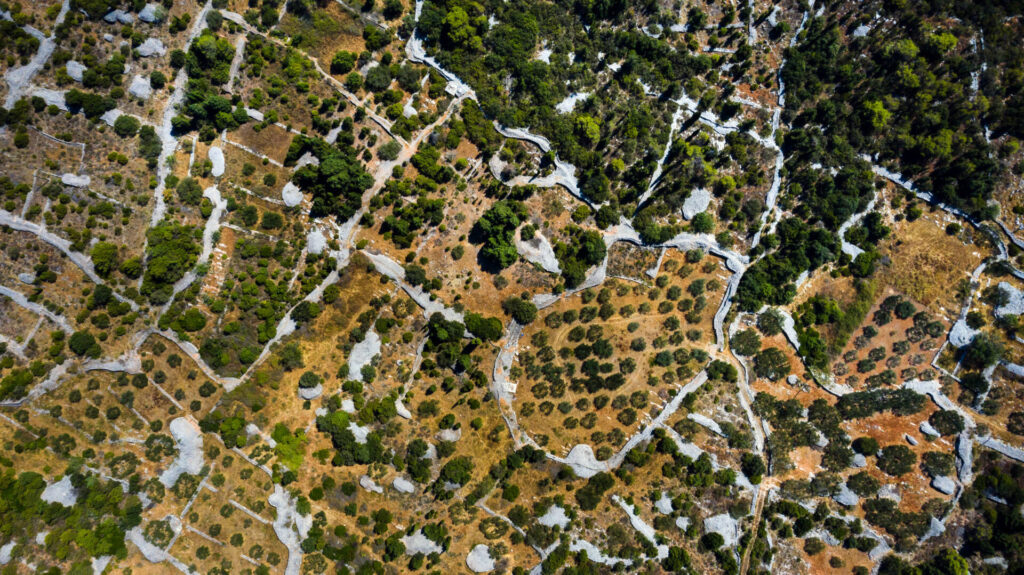 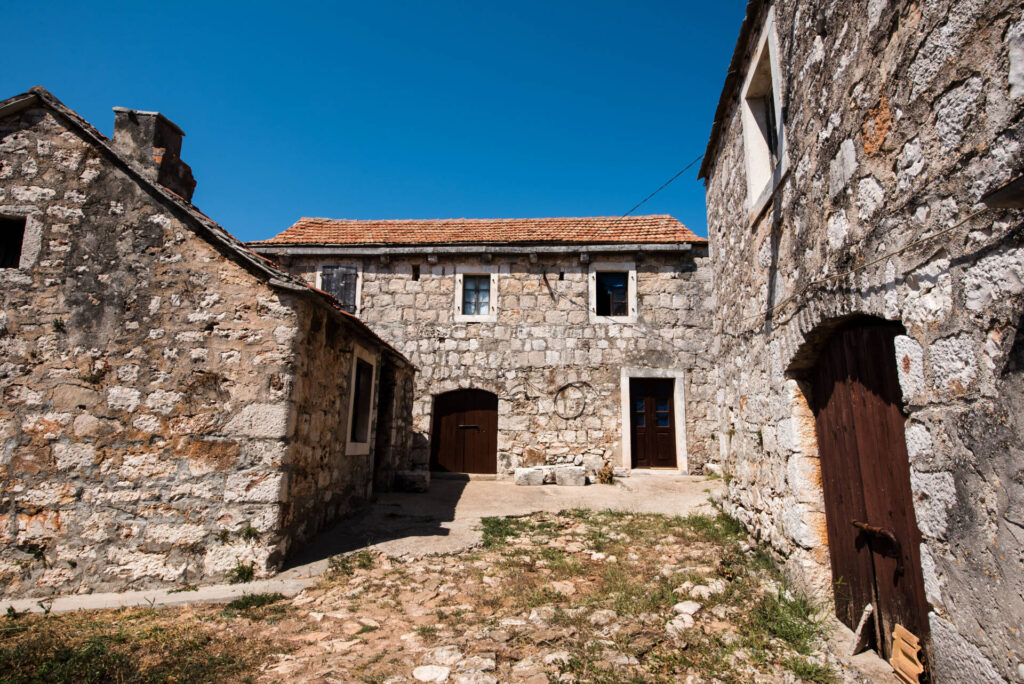 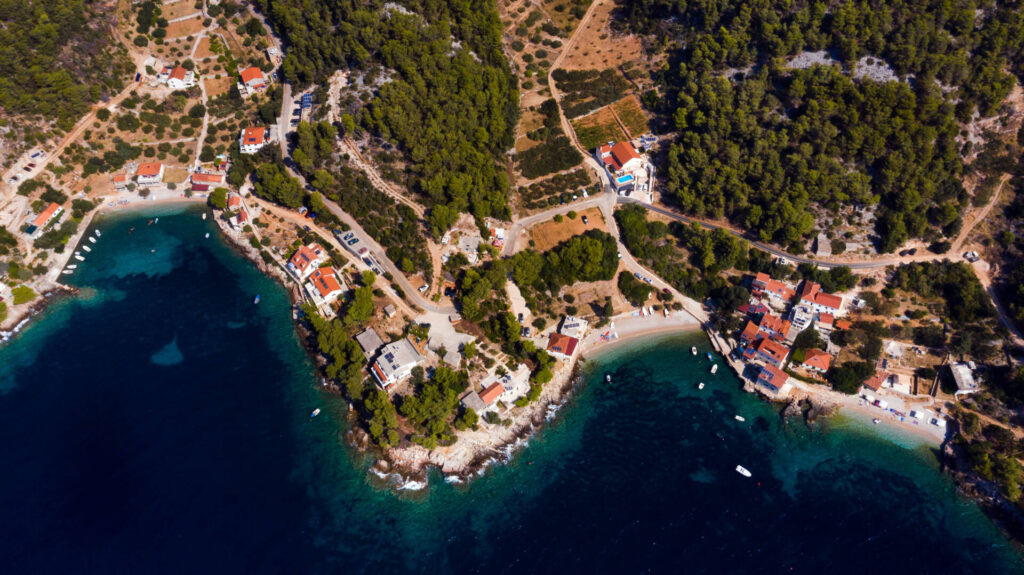 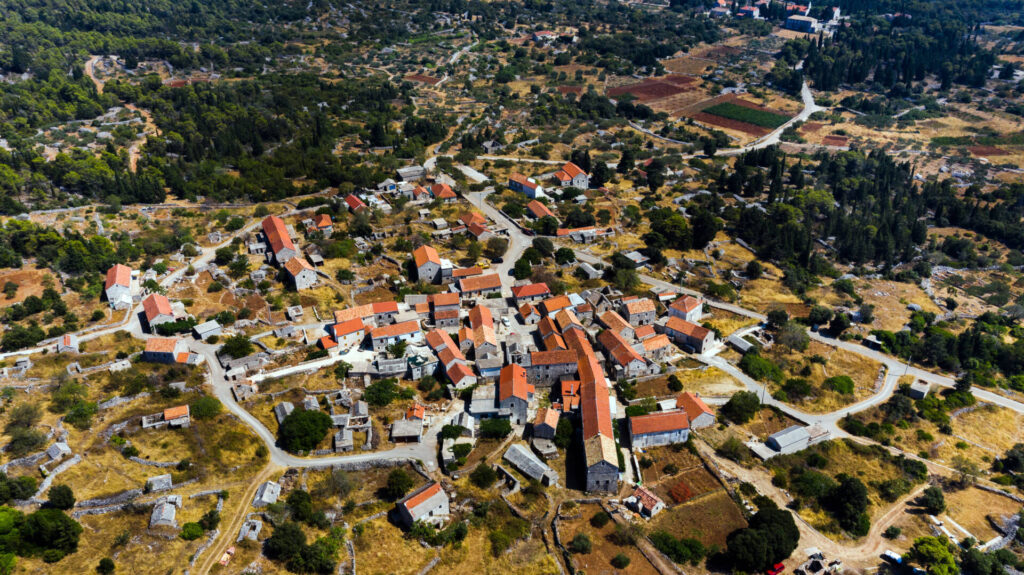 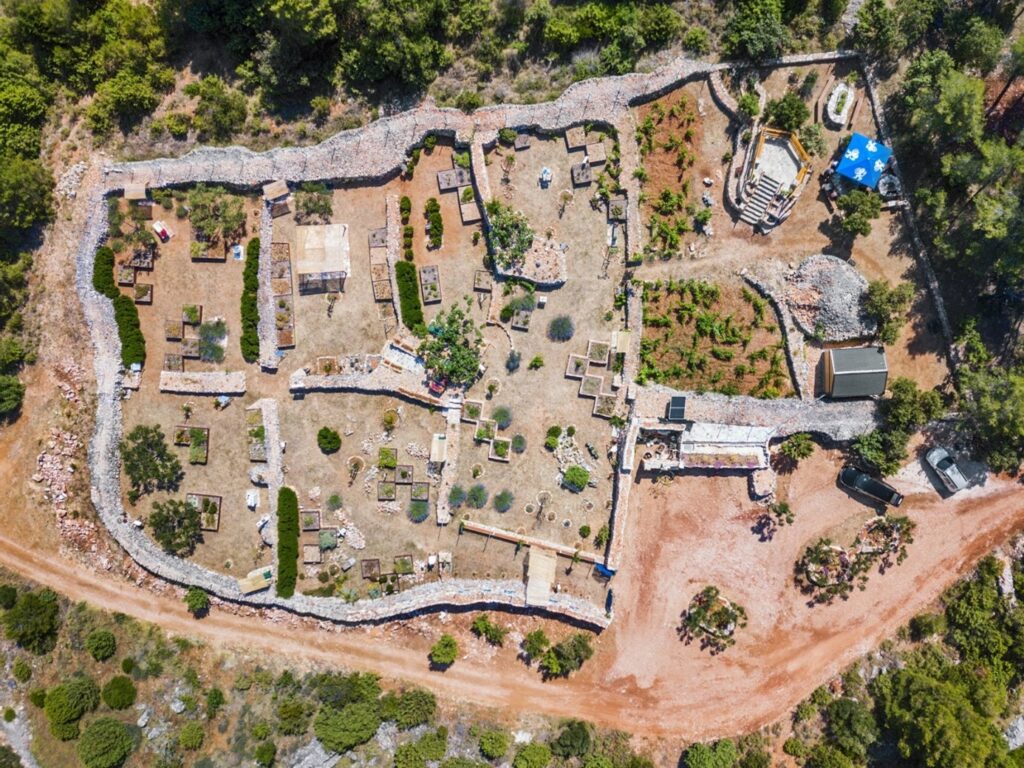 The Fiori Fora Garden near Gdinj offers a wealth of pleasure and education.