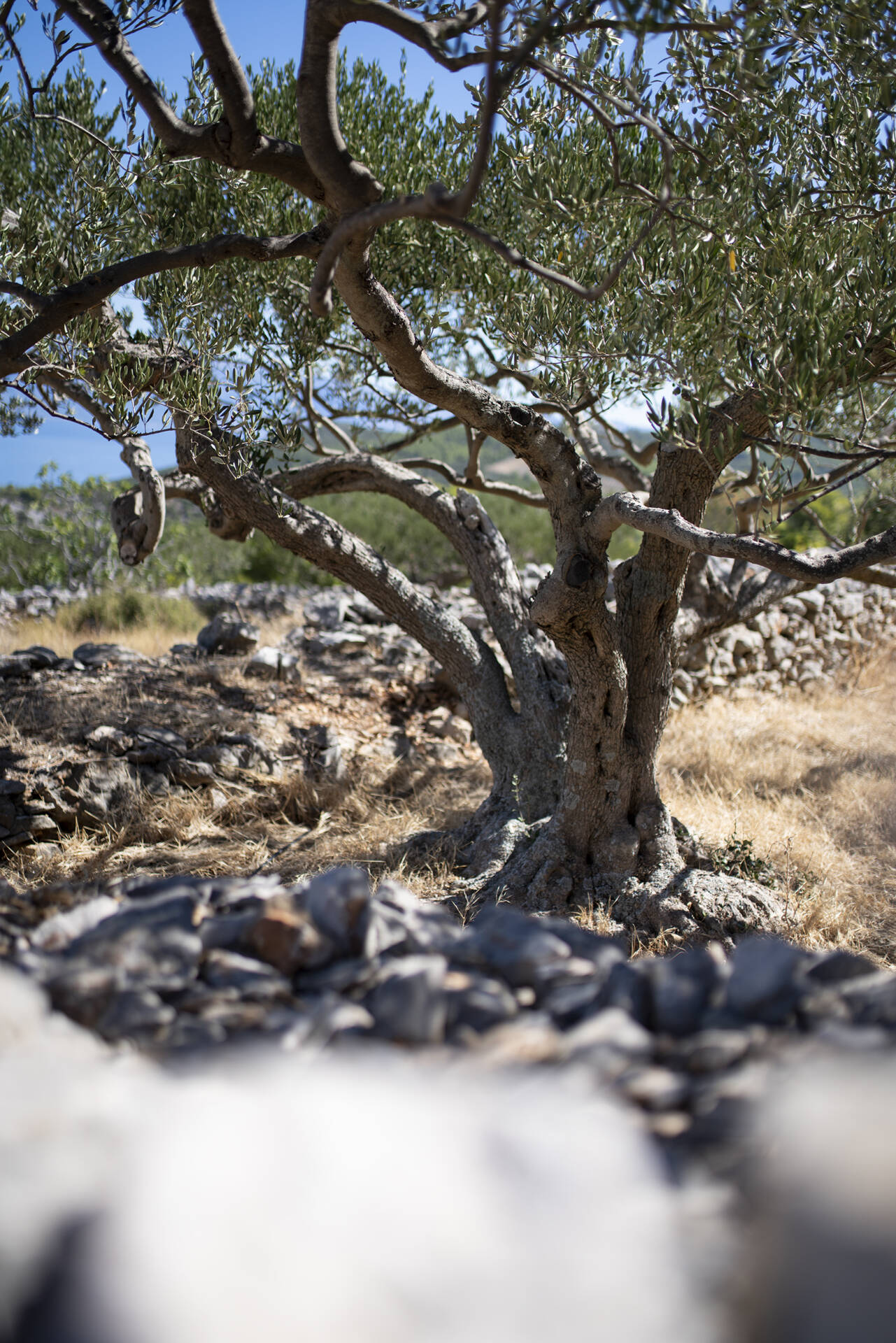 Find out how the Passion connects six places on the island of Hvar, motivating the people of Hvar to walk barefoot with a large and heavy piece of wood on their backs along the island roads in the dead of night, and why the waiting lists for this experience are much longer than those for Hermes Birkin bags? Get to know the phenomenon that has been gathering all generations of islanders for five centuries, find out what it looks like when music you don’t understand gives you chills, and why in Hvar, at this time of year, even the hardest hearts know how to shed a tear. What is the secret of the procession that UNESCO decided to include on the list of humanity’s intangible heritage? It will be an interesting day for those who are inclined to spirituality, and even more so for those who are not interested in spirituality at all. But we won’t keep it all focused on the spirit – we’ll make sure to cater for your body as well.

Have you ever thought of customs that for centuries, just like threads in fine weaving, have been intertwined with people’s lives, marking and shaping people in certain ways without them often being aware of it?

Isn’t life demanding sometimes, and all you need is a quiet, but steady help along the way? Does it occur to you occasionally that in this civilization unconditional love has simply disappeared and you feel melancholy, or perhaps sadness, because of it? Do you feel an undefined sense of guilt and wonder where it comes from? Has it ever occurred to you how wonderful it would be if there was no fear; if there was only faith, hope, and love? And is there a place where this is possible?

A single night in Hvar can prompt you to ask all these and many other questions. It is not a night at a Hvar club, although Hvar is currently most famous for them. This night is tied to a different club; it is a bit more challenging, interesting, and much more exciting. Ideally, you’ll experience the night of Good Thursday to Good Friday in person and ”live”. If you are unable to do so, our task today is to provoke your questions and lead you on the path to seeking answers. It is said that the tradition of carrying the cross in the night procession from Good Thursday to Good Friday is over 500 years old; the earliest written records date from the first half of the 16th century. Its origin is connected with the practice of the penitent processions practiced at the time by the so-called flagellant brotherhoods in Western Europe, which have absolutely nothing to do with 50 Shades of Grey. It is also related to an event that took place in Hvar on February 6, 1510, when, according to historical resources, a small crucifix bled out in a private home; today, this crucifix is kept in the Cathedral of Hvar.

This most famous procession is not the only island procession in which the cross is followed during this night. The locals of Dol go down to Stari Grad and return to Dol. The locals of Sveta Nedjelja go all the way to Jagodna and back. The people of Poljica go to Zastražišće, while the people of Zastražišće go to Poljica. The locals of Gdinje go to Bogomolje and vice versa. The locals of Sućuraj circle the roads around their village. All these processions actually take place only in the morning, and although the meaning and purpose are the same, they are energetically and emotionally incomparable with the experience of the Za Križen procession we are talking about today.

Just as everything in life is changing, it seems that the way this procession has been maintained throughout history has changed as well. Initially, only two neighboring villages used to visit one another, and in time the custom has evolved to what we have today: on the aforementioned night, within a radius of some 20 kilometers, comprising Jelsa, Pitve, Vrisnik, Svirče, Vrbanj and Vrboska, at the same time, at 10 pm, six separate processions begin from the parish churches. The processions are clockwise. Each procession enters each parish church as well as some smaller churches, attending the solemnly arranged Božji greb (the Tomb of Jesus), and ending with a return to the original parish church in the early hours of Good Friday.

Great care is invested into two processions never meeting, one at the exit and the other at the entrance to a place, both because of order and because it is believed that it might bring bad luck. Everything used to be a little more romantic and difficult, so the processions moved along the old gravel roads that connected the villages across the hills, through forests and fields, while today they mostly move along paved roads. Although the route is predetermined, some decisions depend on the cross bearer and his entourage, such as the choice of some churches to enter into and the decision whether to take an asphalt road or the old gravel road. Those who feel they have to give extra thanks for all the gifts in their lives or have special requests for the Almighty usually take the hard way. Yes, a parallel can be drawn between the procession and real life…

The Za Križen procession is not only a spiritual, emotional, energetic, physical but also a wonderful visual experience. At the head of the procession is the cross bearer carrying a crucifix covered with a black veil accompanied by candle (torches and candelabra) carriers of his own choosing. They are all dressed in white tunics that were once worn by fraternity members. This is visually important in creating emotions.

The motive for carrying a heavy wooden cross is usually a personal or family vow. It is carried either as an expression of penance or as a request or in gratitude for the mercy shown. Some cross bearers choose to carry the cross barefoot, only with knit socks on their feet, and the future cross bearer is listed for the carrying at a very young age since some of them have to wait for their turn for over twenty years. All this, of course, creates a particularly strong emotional charge throughout the story.

The parish priests generally do not join the processions; they welcome processions from other parishes. Locals participate in the processions, and more and more often they are joined by many guests. In each procession there is a traditional order: the cross bearer is at the front with his group, followed by men (yup!), and then women (yup!). It is interesting to see how, over the years, the “women’s issue” has dissolved even in the most rigid, most persistent traditional contexts. Namely, lately it has been noticed that some women do not want to respect the established order, so they create a so-called traditional confusion in the procession. The procession itself is transformed along the way; people in groups pray, sing, and some even talk, but the aim is to preserve the traditional structure of the procession.

There are wonderful moments in the procession where meditative music accompanies the spiritual journey. Specifically, 4 to 5 specially chosen kantaduri (singers) sing Gospin plač (the Lament of Our Lady) before the tomb of God in every church at every station of the procession. Part of the Lament is always the same verse with which the singers invite the participants to think specifically about who died on the cross for us that day: Nut mislimo ovdan danas, ki na križu umri za nas… The language of the Lament is archaic, and the melody, although similar in general, varies greatly from place to place. There are extremely cathartic moments of this procession that books can be written about, and the reader would still not be clear what the secret is. At such moments, it seems as if man is merging with man and with God in the eternal triangle of Catholic sin, torment, and salvation.

The island women do not leave the church in a hurry afterwards but stay a little behind to come closer to the tomb of God, because they have to evaluate whose tomb is more beautiful and to pray personally at the grave.

In the early hours of Good Friday, believers who did not participate in the procession (mostly children and the elderly) begin to gather in front of their churches in anticipation of the return of their cross bearers. In Jelsa, a new, emotionally charged and especially interesting custom has emerged: after having carried the cross the entire night, a tired but inspired cross bearer runs for the last hundred meters or so to the parish priest who is waiting for him. The cross bearer kneels, and the parish priest kisses both the cross and the cross bearer, and together they continue to walk to the church where they pray and sing, and where the cross bearer blesses everyone present with the cross that he had humbly and patiently – in the true manner of Ora et Labora – carried to its destination, on which all the present believers finally congratulate him.

The cross bearer is obliged to provide breakfast for the members of the escort, and a big celebratory lunch is prepared a week after the procession. The celebration is reminiscent of a wedding party, and cross bearers are also bought presents. There are both men and women at the lunch; local men joyfully celebrate and feast, while local women joyfully prepare and serve.

The importance of the Za Križen procession for the people is evidenced by the fact that it has taken place continuously and in very difficult historical circumstances. During World War II, it was once banned or approved by the Italian occupation forces in such a way that only cross bearers and several escort members were allowed to hold the procession! For the second time, it was completely banned by German occupation forces, but by a strange coincidence the procession took place at a refugee camp in El-Shat, Egypt. The refugees proudly brought with them the crosses they carried there, and they are still located in the parish churches of Hvar.

The Za Križen procession was added to UNESCO’s list of intangible cultural heritage in 2009.

It seems to us that there is nothing more to add. We can’t wait to bring you along the paths of the procession and show you the details on the spot, the ones we mentioned, but also the ones we didn’t.

VILLAS HVAR would like to thank the authors and our friends for their love and commitment in supporting our work in the common intention of creating a tourist product that will create an unforgettable experience of the island of Hvar for those who use it. It is our wish that you, along with us, enjoy consuming the entire Hvar therapy or individual capsules and leave your mark on the life of our island during your stay.