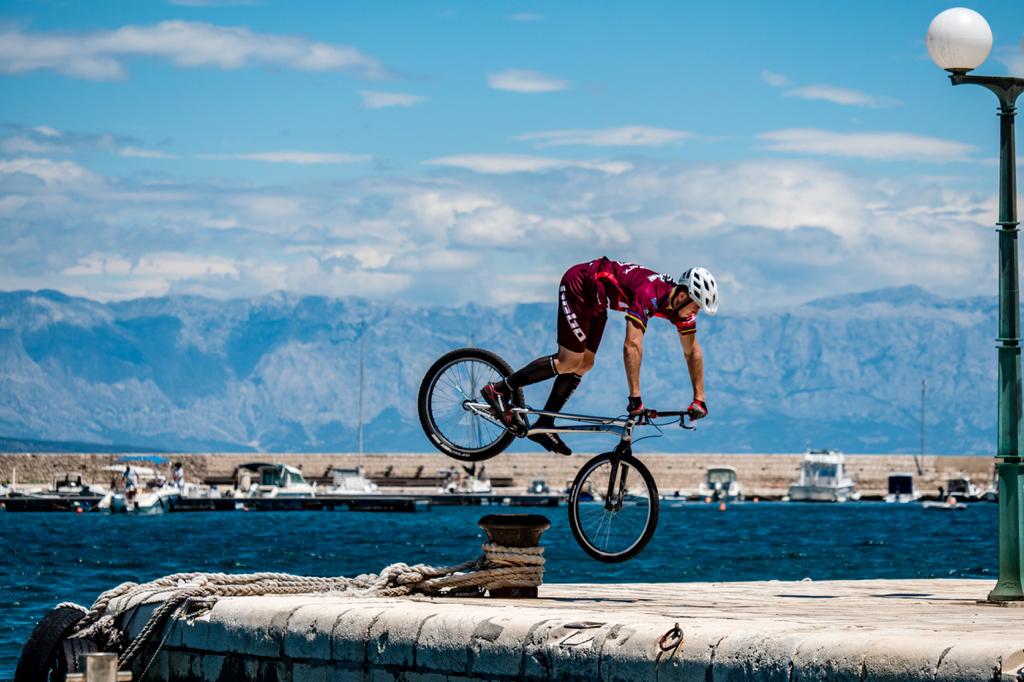 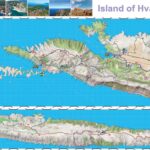 Cycling routes round Hvar are well marked, and pass beside picturesque olive groves, tiny gardens enclosed behind drystone walls, fragrant pine woods, glorious coves and small pebble beaches, which will grab your attention with their beauty. Whichever route you choose, don’t miss the historic sites and jewels of cultural heritage.

The route covers 23.09 km, and is part asphalt, part macadam. It passes across the central part of the island, mainly along a ridge extending from east to west. From the starting point in Jelsa, you head south to pass through Pitve, going towards the Pitve-Zavala tunnel. Just before the tunnel you turn right on to a macadam roadway which winds its way up 180 m to the ridge, which is at an altitude of 455 m. From here you have a stunning view towards the eastern end of the island, Pelješac and the Makarska Riviera. Riding on towards Humac is a pure delight, also a relaxing respite after the steep ride up round all those bends. From Humac, you ride down to the main D-116 road, where you turn left to get back to Jelsa. You turn off the main road into Jelsa to go past the Hotel Hvar, down to the waterfront, and back along the harbour to the finishing point in the town centre.

This circular route covers 22.73 km, partly on asphalted roads, partly macadam tracks. It mainly passes through the Starigrad Plain and its surrounding villages in the central part of Hvar Island. The start is from Jelsa. You then go north to Vrboska, after which you take a macadam road across the Starigrad Plain. When you reach Stari Grad, the route turns off towards the south to go through the villages of Dol and Vrbanj. From Vrbanj you head east through the vineyard and olive groves to return to the finishing point in Jelsa.

This circular route covers 32 km on asphalt roads and macadam trails across the middle of the island. Most of the ride is from east to west along a ridge. The starting point is the ethno-eco village of Humac, which you leave via a macadam road which takes you down to the main D-116 road.  You go east to the village of Zastražišće, where the route turns north to pass among olive groves and lots of different vegetation, then heads west to the point where the track joins the main road, which brings you to the finishing point at Humac.

This circular route round the centre of the island covers 16.3 km, and is mainly along macadam roads across the Stari Grad Plain and neighbouring villages. It starts in Vrboska, heading north across the bridge over the canal to the macadam road which goes through olive groves and woodlands to the bays of Maslinica, Basina and Borova. You then turn south towards the Stari Grad Plain. The route turns back before Stari Grad, to take you back to Vrboska, where the tour ends.
Distance: 16.3 km
Asphalt: 7.80 km/47.85%
Macadam: 8.5 km/52.15%
Lowest point: 1 m
Highest point: 77 m
Elevation gain: 191 m
Check out the link.

This mainly circular route is partly on asphalt roads, partly on macadam trails, and covers 24.5 km. It goes mainly through the Kabal promontory, repeating a section on the west side. The route starts in the centre of Stari Grad at the corner of the municipal park. It then heads north towards Rudina Village, before turning on to a macadam path leading towards the Kabal peninsula. Here the route goes into a Y shape, in that it goes on to two headlands, coming back on the same trail each time. There is a fine view from here over the west side of Hvar and the south side of Brač Island, and the area is rich in beautiful bays. Heading back towards Stari Grad, the route passes across the southern part of the peninsula, below the Arkada Hotel and along the seaside promenade to arrive at the finishing point in front of the Stari Grad Tourist Board office.

This circular route on the central part of the island covers 21.5 km, partly on asphalt roads, partly on macadam. The starting point is in Stari Grad, at the corner of the park. The route continues westwards towards the ferry port, and then turns on to the old road towards Velo Grablje. Just before the viewing point, the path turns on to macadam towards the east, up to the highest point on Hvar, sv. Nikola (St.Nicholas’ peak), at 626 m. This offers the chance to savour the magnificent view and have a rest, before continuing south towards Dol, then across the Stari Grad Plain to the finishing point in Stari Grad.

This circular route across the central part of Hvar covers 40.5 km on asphalt roads and macadam trails. It starts from above the Dubovica Bay on the south side of the island, following the main D-116 road until it turns off before the Selca- Dubovica tunnel on to a macadam trail which takes you west up to St. Nicholas’ Peak, the highest point of the island at 626 m. Continuing across the cultivated Poljica and Gvozd fields, you reach a point where you turn to go northwards across the villages of Svirče, Vrisnik and Pitve (on asphalt roads), right through towards the Pitve – Zavala Tunnel. Just before the tunnel, you turn on to a winding road which takes you up to the Borovik Height at 500m, and then follow the winding trail down on the south side to join the main road above the village of Zavala. Heading west, you stay on the road to reach the village of Sveta Nedjelja, where you turn on to a macadam trail which will take you back to the end of the route above the Dubovica Bay.

This circular route in the western part of the island covers 20.5 km over asphalt roads and macadam trails. It starts by the Milna settlement, and follows the main road east towards the Selca – Dubovica Tunnel. Before the tunnel, you turn on to a macadam trail which takes you to the peak, then head west to the viewing point above the village of Velo Grablje. Here the route joins the asphalt road which passes above the village of Velo Grablje. Just before the village of Brusje you join the macadam trail which passes through the charming uninhabited village of Malo Grablje back down to the end point at Milna.
Distance: 20.5 km
Asphalt: 14.1 km/68.78%
Macadam: 6.4 km/31.22%
Lowest point: 37 m
Highest point: 416 m
Elevation gain: 630 m
Check out the link.

This circular route in the western part of the island covers 20.5 km over asphalt roads and macadam trails. It starts in the centre of Hvar Town by the bus station, heading east out of town on the main D-116 road towards the village of Milna, where you take the macadam trail heading north to the village of Velo Grablje. From there the trail joins the asphalt road which takes you west through the village of Brusje back to the finishing point in Hvar.

Cycling route THROUGH THE FIELDS
This route covers 16.71 km in a figure-of-eight, mainly on macadam trails. It starts in the centre of Hvar Town by the bus station, although the true starting point is the substation above Hvar, where you turn on to a macadam trail which takes you uphill and down through the Hvar olive groves to the village of Brusje. At Brusje you join the asphalt road which takes you back to the finishing point in the centre of Hvar, where you started.

Cycling route HVAR ISLAND LONG HAUL: THE LESINA ROUTE
Hvar • Sućuraj
This long distance ride takes you from one end of the island to the other and back, a distance of 174.32 km on asphalt roads, so it is suitable for all types of bicycle. It starts from the Vira Bay near Hvar, and passes through all the main settlements on Hvar: Hvar Town, Stari Grad, Jelsa and Sućuraj, also the villages in between.

This circular route across the far eastern end of the island covers 17.8 km on asphalt roads and macadam trails. It starts in the centre of Sućuraj, passing across Hvar Island’s eastern headland beside Sućuraj’s lighthouse. From there a macadam trail takes you to the Mlaska Campsite, where the trail joins the main D-116 road. This part of the ride is gently hilly and not too demanding. After about 15 minutes, you come to a ridge about 205 m above sea level, and then go down on a macadam trail towards the bays on the south side. The vegetation here is relatively dense, so the ride through the pinewoods is pleasantly cooler. This section ends beside the beach in the Česminica Bay, where the trail joins the asphalt road which takes you back to the end point in Sućuraj
Distance: 17.80 km
Asphalt: 5.5 km/30.90%
Macadam: 12.3 km/69.10%
Lowest point: 0 m
Highest point: 226 m
Elevation gain: 335 m
Check out the link.

This circular route in the eastern part of Hvar covers 19.8 km on asphalt roads and macadam, going partly westwards over the ridge, before going down towards the south coast. The starting point is in the village of Bogomolje, and the route goes through the village northwards on an asphalt road before going on to macadam through the olive groves. Heading west there is a gentle upward incline from 220 m to 350 m before the track joins the main D-116 road heading towards Gdinj. Arriving in Gdinj there is a steep winding road down (350 m to 10 m) leading to the southern bays of Gdinj and Bogomolje. The route continues on a macadam trail through the bays, to a place where the steep climb up to Bogomolje begins.
Distance: 19.8 km
Asphalt: 8.6 km/ 43.43%
Macadam: 11.2 km/56.56%
Lowest point: 0 m
Highest point: 351 m
Elevation gain: 598 m
Check out the link.

Rent a boat, bike or car: 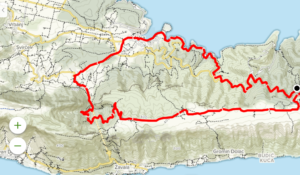 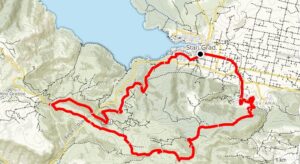 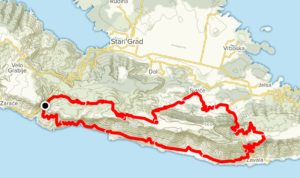 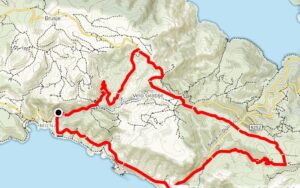 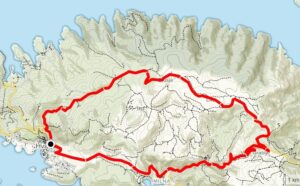 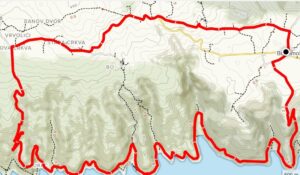 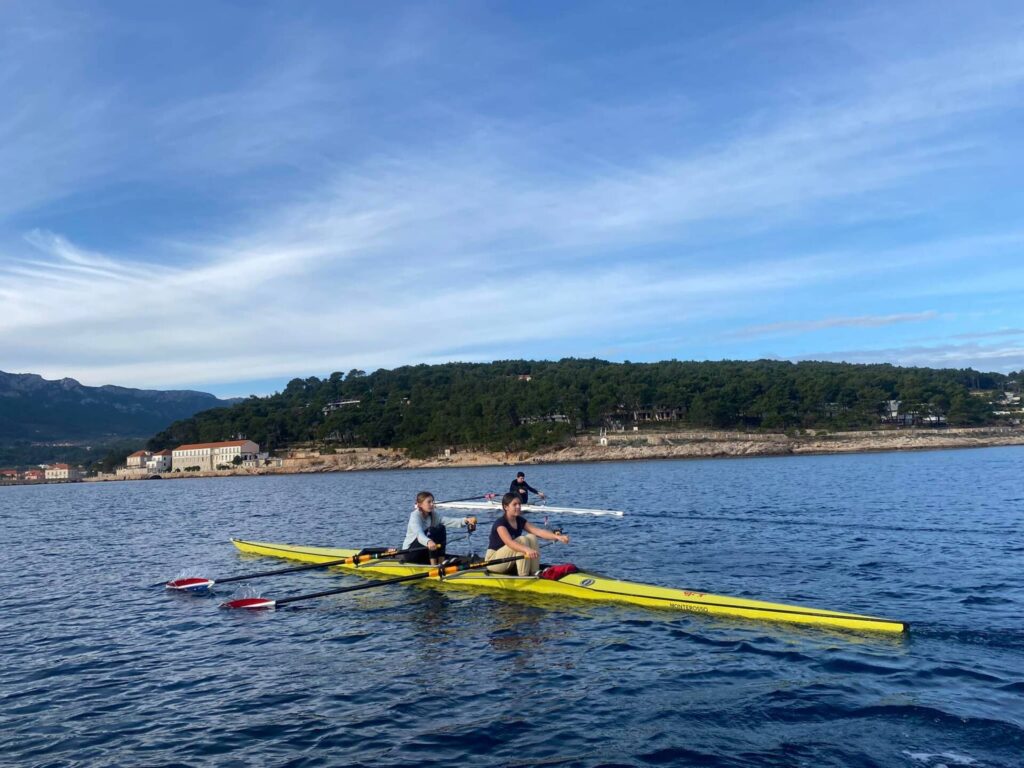 Jelsa’s Rowing Club offers excellent facilities for fitness enthusiasts and rowers of all levels and ages. 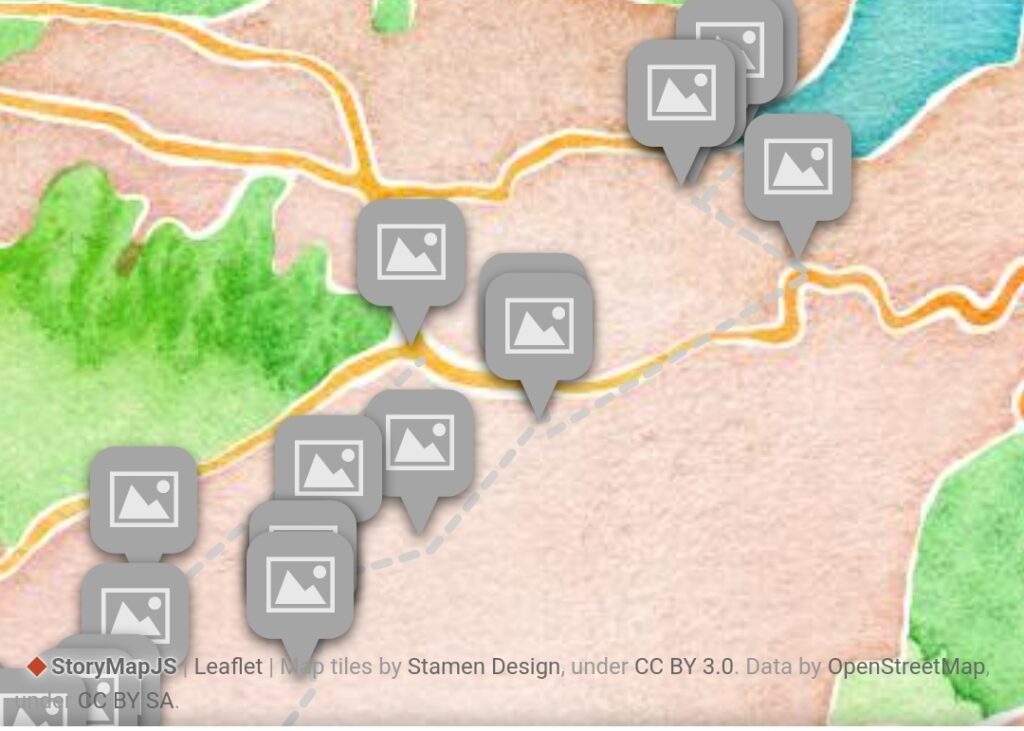 A Nordic Walk with GIS technology

Jelsa to Pitve: a Nordic Walk guided by a special GIS application. 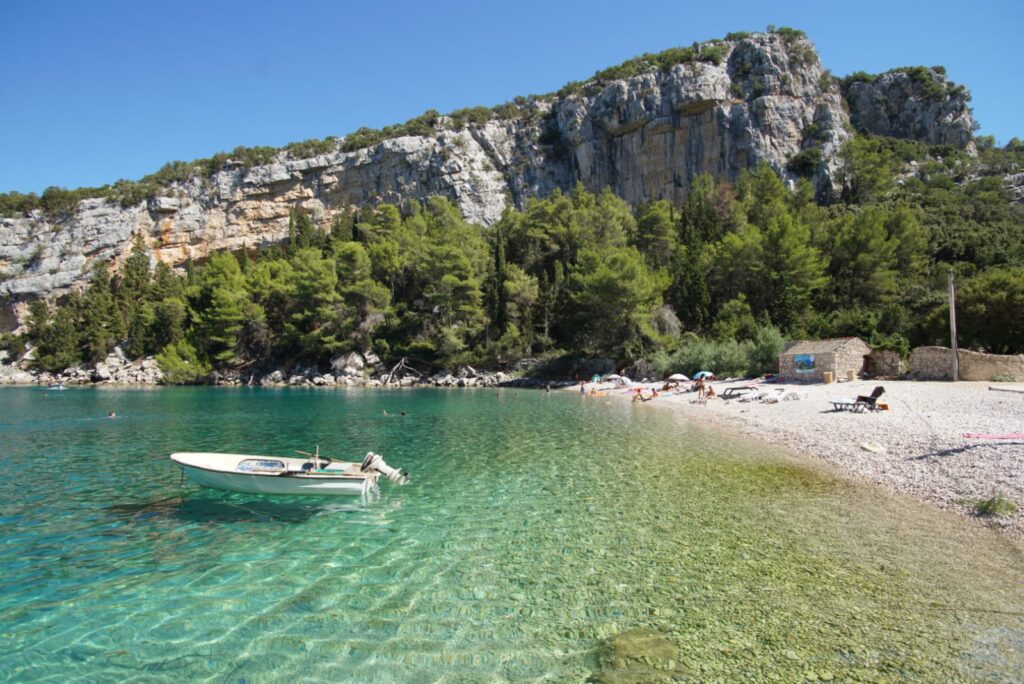 Hvar has much to offer rock climbers of all levels. 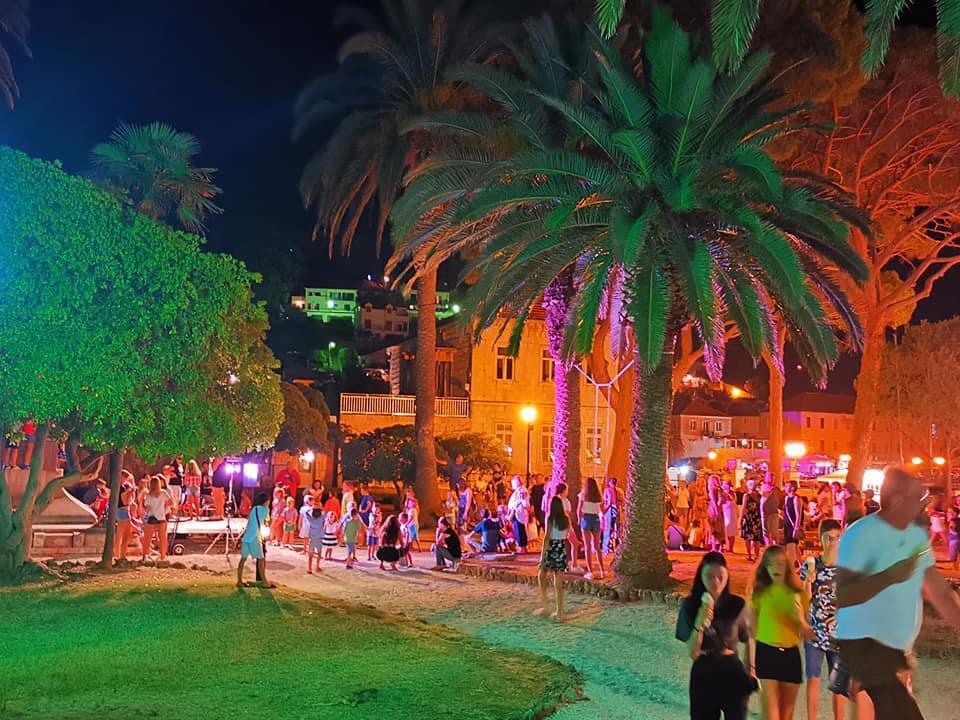 The mini-disco is one of Jelsa’s most popular activities for the very young.